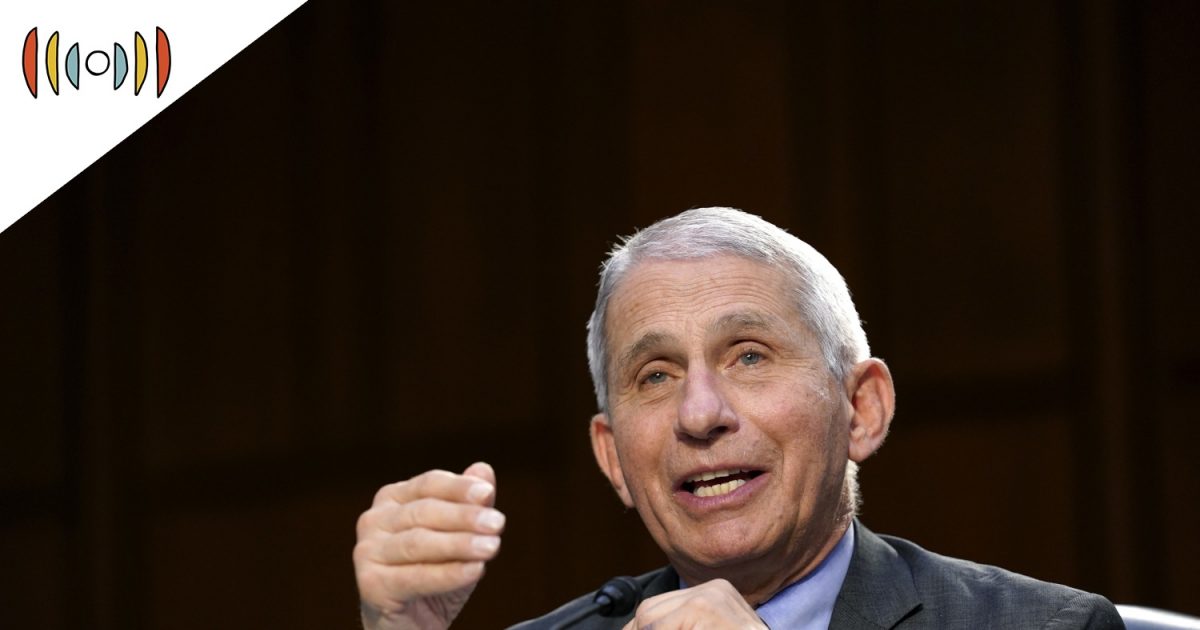 PSAKI: The president has announced a U.S. commitment to sharing a total of 80 million doses by the end of June. So that’s 25 million doses that will go out as soon as possible.

She said some of those doses are shipping out this week.

About 19 million shots will go to the U.N.-backed COVAX program. Millions more will go to South and Central America, Asia, and Africa.

WALENSKY: This represents a decrease of more than 30 percent from our prior 7-day average. And more importantly, it is a 94 percent decrease from the peak of COVID-19 cases we reported in January of this year.

At the January peak, new cases topped a quarter of a million per day.

That after thousands of pages of emails to and from Dr. Fauci were made public through a Freedom of Information Act lawsuit.

Republicans say Fauci’s emails from last year show that he was concerned about research taking place at a lab in Wuhan, China, where COVID-19 first spread.

Gain-of-function research is the practice of altering a virus or organism in a laboratory in a way that could make it more dangerous.

Fauci, in an email, expressed concern that U.S. funding may have even helped to pay for gain-of-function research in Wuhan.

Some Republicans say the emails also suggest Fauci may have given more credence to the COVID-19 lab leak theory privately than he was willing to admit publicly.

Fauci fired back at Republicans on Thursday, calling their criticism “nonsense” and said his emails have been taken out of context. He stated—quote—“I have always said . . . that I still believe the most likely origin is from an animal species to a human.”

ANNA JOHANSEN BROWN, REPORTER: The Labor Department reported Thursday that jobless claims dropped to 385,000. That’s down 20,000 from the week before. The number of weekly applications for unemployment aid, which generally reflects the pace of layoffs, has fallen steadily all year.

At least 25 states have announced plans to cut off some emergency federal aid as early as next week. That includes so-called enhanced unemployment, which provides an extra $300 per week in federal money on top of state benefits.

Netanyahu opponents move to oust him from office » Political opponents of Israeli Prime Minister Benjamin Netanyahu pushed Thursday for a quick vote in parliament to end his 12-year run as the country’s leader.

That just hours after opposition leader Yair Lapid and his main coalition partner, Naftali Bennett, declared they had reached a deal to form a new government.

The coalition is very diverse, consisting of eight parties from across the political spectrum. But Professor Gideon Rahat with Hebrew University says its members have one thing in common—a desire to oust Netanyahu from office.

RAHAT: The only rationale of this coalition of anti-Netanyahu forces.

The alliance includes hardliners previously allied with Netanyahu, as well as center-left parties and even an Arab faction.

The coalition could end two years of political limbo in Israel. Four elections over that time have ended in deadlock.

10,000 volunteers drop out of Tokyo Olympics » The 2021 Summer Olympics in Tokyo are now less than 50 days away. But officials are facing an uphill climb as they prepare for the games with thousands of volunteer staffers backing out. WORLD’s Kristen Flavin reports.

KRISTEN FLAVIN, REPORTER: The International Olympic Committee expects at least 80 percent of athletes and residents of the Olympic Village to be vaccinated against COVID-19. But only 2-to-3 percent of Japanese residents are fully vaccinated. For that reason, many volunteer staffers are growing increasingly uneasy about taking part in the games.

About 10,000 of 80,000 unpaid volunteers for the Summer Olympics and Paralympics have told organizers they’ve decided not to participate.

Organizers said the loss would not affect operations.

The Japanese government has resisted calls by some to delay the Summer Olympics once again amid the slow rollout of vaccines in Japan.

Officials postponed the games last year due to the pandemic. The Summer Olympics are now set to begin on July 23rd.

I’m Kent Covington, and for more news, features, and analysis, visit us at wng.org.

WORLD Radio transcripts are created on a rush deadline. This text may not be in its final form and may be updated or revised in the future. Accuracy and availability may vary. The authoritative record of WORLD Radio programming is the audio record.

MASSENA — The executive director of the Business Development Corporation for a Greater Massena says that, despite the current pandemic, he’s still working...
Read more
Business

PITTSBURGH, April 29, 2021 /PRNewswire/ -- PNC Bank is proud to announce its 11th annual Women in Business Week, which will be held...
Read more
Economy

HONG KONG -- China weathered the economic fallout from Covid-19 better than any other major country, and economists are predicting a bigger snapback this...
Read more

After hundreds of Palestinians were injured due to Israeli Police's firing rubber bullets and stun grenades at protestors, during the clashes at Islam's third holiest...
Read more
USA

9:46 AM ETSAITAMA, Japan -- The best thing Team USA had going for it this summer was Kevin Durant committing to play. On Saturday,...
Read more
Business

“We’ve got roses, we’ve got lilies, we’ve got carns, we’ve got sunflowers…” said Christine Vasconcelo as she shows us around her Tampa flower shop,...
Read more

Every day, in every corner of the Earth, people have a choice of how to spend, whether it is cash, checks, or using Visa,...
Read more
World News

Are there answers to our worrying questions about the economy? – Spring Hope Enterprise

Mike Walden By Mike Walden Even though, like many, I have been working...
Read more

Biden warns of fatal consequences as Trump stonewalls on the transition, and Whitmer faces more blowback over the restrictions in Michigan. It’s Tuesday, and...
Read more
Stock

Thursday brought some selling pressure to Wall Street, with major market benchmarks giving up ground but finishing well off their worst levels of the...
Read more
Cryptocurrencies