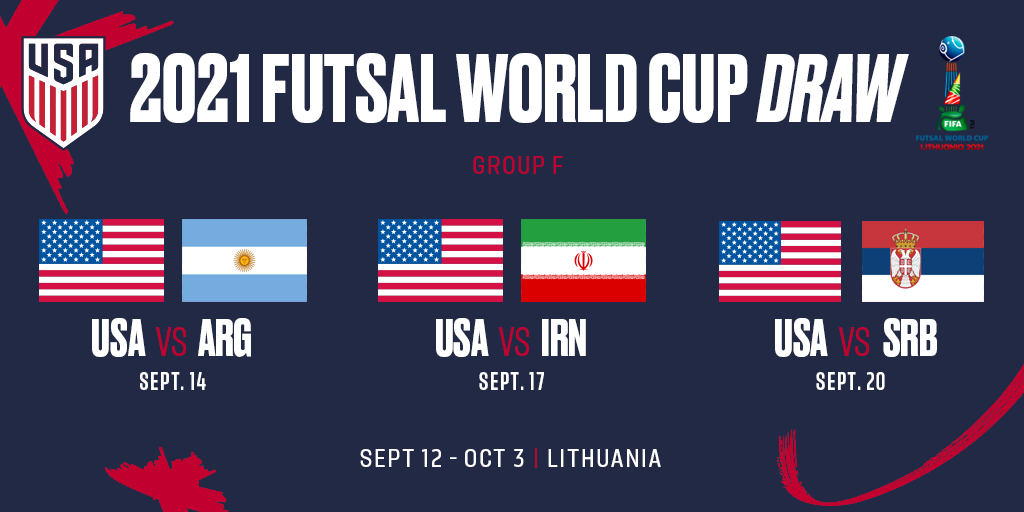 CHICAGO (June 1, 2021) – The U.S. Futsal National Team will face Argentina, Iran and Serbia in Group F at the upcoming 2021 FIFA Futsal World Cup, which will take place from Sept. 12-Oct. 3 in Lithuania. The final draw for the competition took place today at FIFA Headquarters in Zurich.

“It’s an exciting draw for us,” said Fustal National Team head coach Dusan Jakica. “Opening against the world champion in Argentina will be a huge challenge, but a challenge that our team will embrace and enjoy. Iran is the reigning Asian champion and Serbia is also one of the best teams in the world, but we will be ready. We are looking forward to getting to Lithuania and showcasing the progress for U.S. Soccer in futsal.”

This year marks the USA’s sixth appearance at the FIFA Futsal World Cup. The U.S. reached the final of the 1992 tournament, winning the silver medal in its highest-ever finish at the competition.

The USA’s final group stage match vs. Serbia carries some extra intrigue as Jakica hails from Serbia. The U.S. head coach spent most of his playing/coaching career there and served as an assistant with the Serbia Futsal National Team from 2010 to 2015.

The 2021 FIFA Futsal World Cup features 24 nations divided into six groups of four teams. The top two finishers in each group, as well as the four best third-place teams advance to the Round of 16 from Wednesday, Sept. 22 to Friday, Sept. 24. The quarterfinals will take place on Sunday, Sept. 26 and Monday, Sept. 27. The winners of those games will advance to the tournament semifinals on Wednesday, Sept. 29 and Thursday, Sept. 30 while the championship match is set for Sunday, Oct. 3 at Kaunas Arena in Kaunas.

*In accordance with the World Anti-Doping Code and a Dec. 2020 decision by the Court of Arbitration for Sport, this team will participate as neutral athletes of its national sports federation

Should the USA advance to the Round of 16, it could face a team from Groups B, C, D or E.

The U.S. was drawn out of Pot 4 which included Morocco, Vietnam, Uzbekistan, Angola and Venezuela. Teams were sorted into pots based on a ranking determined by success in the last five Futsal World Cups, with more recent tournament results weighted more heavily, as well as performance in Confederation qualifying tournaments factored in.

The tournament will be the ninth FIFA world championship for futsal. After the first competition in 1989, it has been held quadrennially from 1992 on. In 2008, the tournament expanded from 16 to the current 24-team format.

Argentina will head to the Futsal World Cup as defending champion after winning the CONMEBOL Futsal World Cup qualifiers. It will be the USA’s fourth showdown with La Albiceleste at the tournament. The USA defeated Argentina in silver and bronze medal runs in 1992 and 1989, respectively. Former U.S. Men’s National Team stalwarts Tab Ramos and Peter Vermes scored in the 1989 victory. Iran has participated in the Futsal World Cup more than any other Asian nation.

This year, Iran was nominated to participate by the Asian Football Confederation after the original qualifying tournament was canceled. The U.S. topped Iran in the semifinals of the 1992 FIFA Futsal World Cup, securing its place on the podium.

Serbia clinched one of the final two berths from Europe in a tightly contested playoff vs. Finland after winning five of six games in the main qualifying competition. The USA and Serbia have never faced off at the FIFA Futsal World Cup.

L’Oréal USA Achieves Carbon Neutrality Across All US Sites: Here’s How They Did It – Environment + Energy Leader

Bitcoin (BTC) is facing a stiff challenge from the bears near the $48,000 mark. As Cointelegraph reported earlier, the buy and sell levels show...
Read more
Sports

Newcastle have agreed a fee in the region of £25m with Arsenal for midfielder Joe Willock.Personal terms are yet to be finalised, but Newcastle...
Read more

This has been another excellent year for U.S. stocks — so far — as the S&P 500 has returned 17%, following an 18% gain...
Read more
European Premier League

Shkodran Mustafi appears to be a target for a number of European clubs. The Arsenal defender is barely being used by manager Mikel Arteta...
Read more
USA

LSU knew in 2018 that officials kept allegations against athletes in-house. It did nothing. – USA TODAY

Does Crypto Belong In Your Investment Portfolio? These 4 Questions Can Help You Decide – NextAdvisor

Editorial IndependenceWe want to help you make more informed decisions. Some links to products on this page will take you to a partner...
Read more
Stock

Mpumalanga-based coal miner Arnot OpCo has donated sportswear and equipment to Laerskool Rietkuil Primary School, in Mpumalanga, as part of its commitment to uplifting the...
Read more

After hundreds of Palestinians were injured due to Israeli Police's firing rubber bullets and stun grenades at protestors, during the clashes at Islam's third holiest...
Read more
Stock

The S&P 500 rose slightly on Wednesday amid the Federal Reserve's latest pledge to support the economy and the apparent progress in U.S. fiscal...
Read more