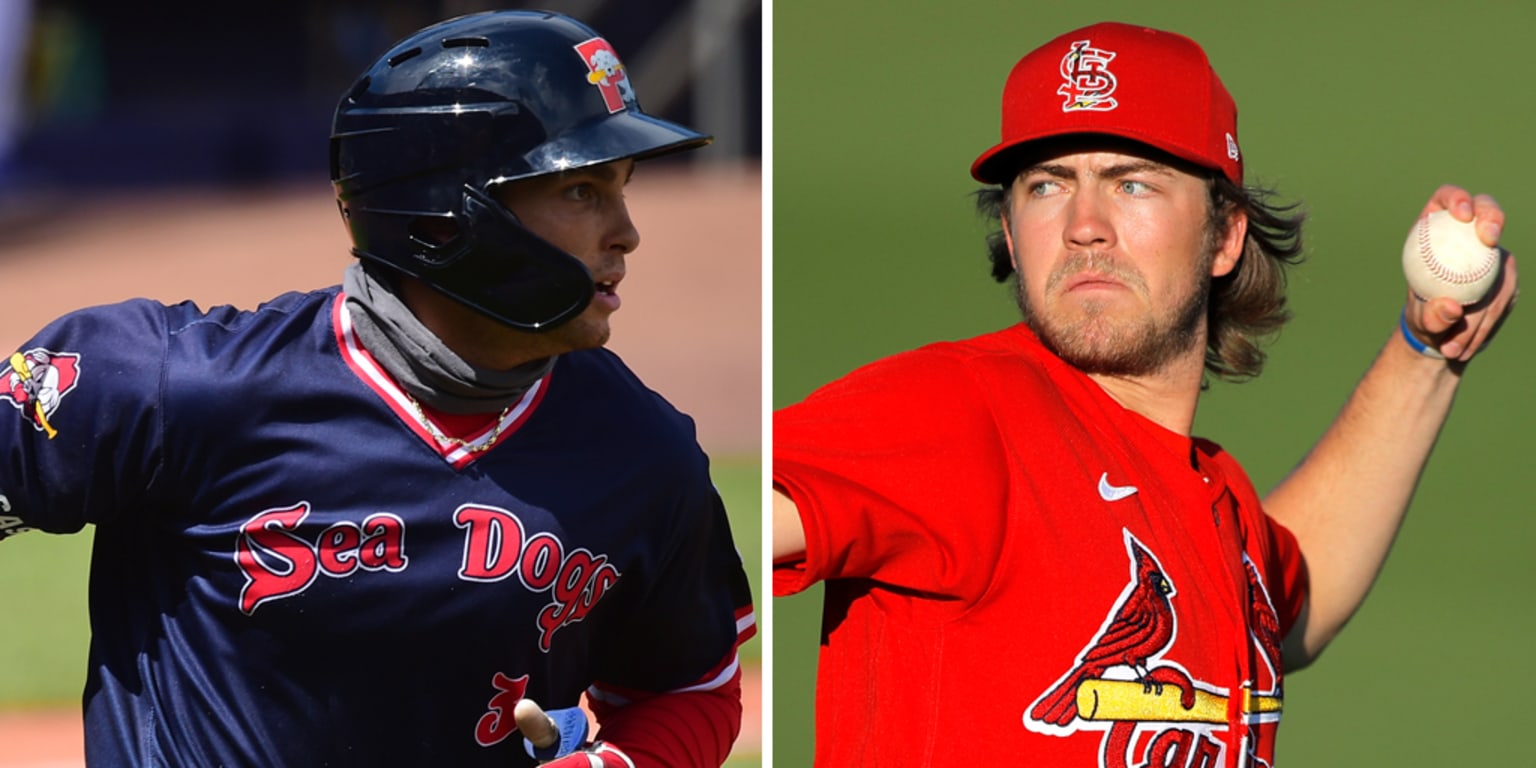 It’s crunch time for the United States if it hopes to return to Olympic glory. On Sunday, the baseball world got its first look at the preliminary roster for the group aiming to lead it there.

Headlined by Top 100 prospects and big league veterans, USA Baseball released its 28-player training camp roster for the upcoming WBSC Americas Olympic Baseball Qualifier. The squad will be cut to 26 for the event, set for May 31-June 5 in Florida.

Left-hander Liberatore jumped two Minor League levels to open this season with Triple-A Memphis after last pitching in the Minors for Class A Bowling Green in 2019 while he was still with the Tampa Bay Rays organization. In three outings for the Redbirds so far this year, the 21-year-old has gone 0-2 with a 4.67 ERA but has pitched into or through the sixth in each start and has struck out 14 against four walks in 17 1/3 innings.

Casas has been stellar in his first taste of Double-A this season. The slugging first baseman currently boasts a .323/.400/.516 slash line for Portland with three homers and 13 RBIs in 16 games played. Over parts of three Minor League seasons, Casas is a .263/.355/.481 hitter and is still young for his level at 21 years old in Double-A.

Liberatore and Casas were teammates on the 2017 USA Baseball U18 national team that captured the world championship in the U18 Baseball World Cup. Casas was named Most Valuable Player of that event in Thunder Bay, Ontario after hitting .250/.385/.625 with a tournament-best three home runs and 13 RBIs. Liberatore did not allow a run over 12 innings in his two starts for the US, striking out 13 against five walks and only surrendering five hits.

The Americans went 9-0 in the 2017 U18 Baseball World Cup with an average margin of victory of over six runs per game. The US pitching staff, part of a prospect-stacked roster, combined to yield just three earned runs of five total, strike out 101 and walk 29 in 77 innings over the course of the tournament.

Woods Richardson is currently with Double-A New Hampshire and has gotten off to a terrific start. In four outings, the righty is 1-0 with a 2.37 ERA and has struck out 31 with just eight walks in 19 innings. Opponents have managed just a .197 average against him, and Woods Richardson’s WHIP sits at 1.16.

Casas’ Red Sox organizational teammate Duran is one step up the ladder from the first baseman. Duran, currently Triple-A Worcester’s regular center field, is batting .299/.390/.672 with seven homers and four doubles among his 20 hits in 17 games played. Duran is also coming off recent international experience of his own, having played for Puerto Rico in the 2021 Caribbean Series after finishing strong with the Criollos De Caguas in the Puerto Rican Winter League. Over seven Caribbean Series games, Duran was a force with a .400/.500/.640 slash line.

Oakland’s No. 3 prospect Nick Allen, Tampa Bay’s No. 12 Joe Ryan and Milwaukee’s No. 25 Clayton Andrews are also among the preliminary group. Allen, a second baseman/shortstop, is currently with Double-A Midland and batting .297/.382/.406 through his first 17 games this season. Right-handed pitcher Ryan is part of a prospect-heavy Triple-A Durham roster and has made four starts for the Bulls, going 1-2 with a 5.94 ERA, striking out 26 while walking only five in 16 2/3 innings pitched. Two-way player Andrews is currently with Triple-A Nashville and has pitched seven games in relief with a 4.82 ERA while going hitless in five at-bats. He has yet to see time in the outfield this season.

Additionally, former Olympic speed skater and current Marlins farmhand Eddy Alvarez free-agent catcher Matt Wieters and Mariners farmhand Eric Filia who is trying to play his way to the Majors after playing just 125 Minor League games since the start of 2018. Former Major Leaguer Brandon Dickson, is one of the returning members of the US roster from the 2019 WBSC Premier12 tournament when the Americans took fourth place and narrowly missed out on an Olympic berth by losing the bronze medal game to Mexico.

The United States will announce its final roster on May 30 before opening the Americas Olympic Qualifier the following day against Nicaragua 5 p.m. ET from Clover Park in St. Lucie, Fla. The Mets’ Spring Training home and The Ballpark of the Palm Beaches (spring home of the Astros and Nationals) will serve as host venues for the six-day event.

The winner of the qualifier will clinch a trip to the Tokyo Olympic Games while the second and third-place finishers will move on to WBSC’s Final Global Qualifier set to be held with dates to be confirmed after the Americas event.

USA Baseball won the bronze medal in 2008 in Beijing, the last time the sport was included in the Olympic Games. The US has captured just one gold in Olympic baseball history, doing so by knocking off international powerhouse Cuba in the 2000 Sydney Games.

Although the Netherlands initially avoided strict measures, a lockdown was brought in last December and, after the cabinet decided on a curfew in January,...
Read more
European Premier League

Led by Real Madrid, Barcelona and Juventus Turin, the Premier League, which failed in the spring, appears to be working on a restart. Contrary...
Read more
Economy

Here’s what you need to know:Some Americans that used tax preparation services have temporary accounts on file with the I.R.S.Credit...Eric Gay/Associated PressThe Internal Revenue...
Read more

A German-Vietnamese social media star dies at 29, and other news from around the world. – The New York Times

Want to get The Morning by email? Here’s the sign-up.Good morning. The next few months could be rough for the U.S. economy — but...
Read more
Sports

LINCOLN, Neb. (KOLN) - For a second time, youth and high school sports are being put on hold.It’s part of the Lancaster County DHM...
Read more

Baden-Wurttemberg, Stuttgart, May 29, 2021 (GLOBE NEWSWIRE) -- 29 May 2021 - Cryptocurrency exploded in popularity over the past few months and is the...
Read more
Economy

The influencer is a fading stock character of the Internet’s commedia dell’arte. Often a conventionally attractive white woman, she shows off her aspirational life...
Read more
World News

Unlike many Chinese, she dropped out of school during her teenage years to couch-surf around Los Angeles, has embraced an androgynous style during her...
Read more

Vermont Business Magazine William Shakespeare coined the phrase "To thine own self be true." Todd Graves has applied that philosophy to his business life...
Read more
Economy

The economy, which continues its slow healing from the pandemic recession, actually isn’t all that different than it was in the fall. But there...
Read more