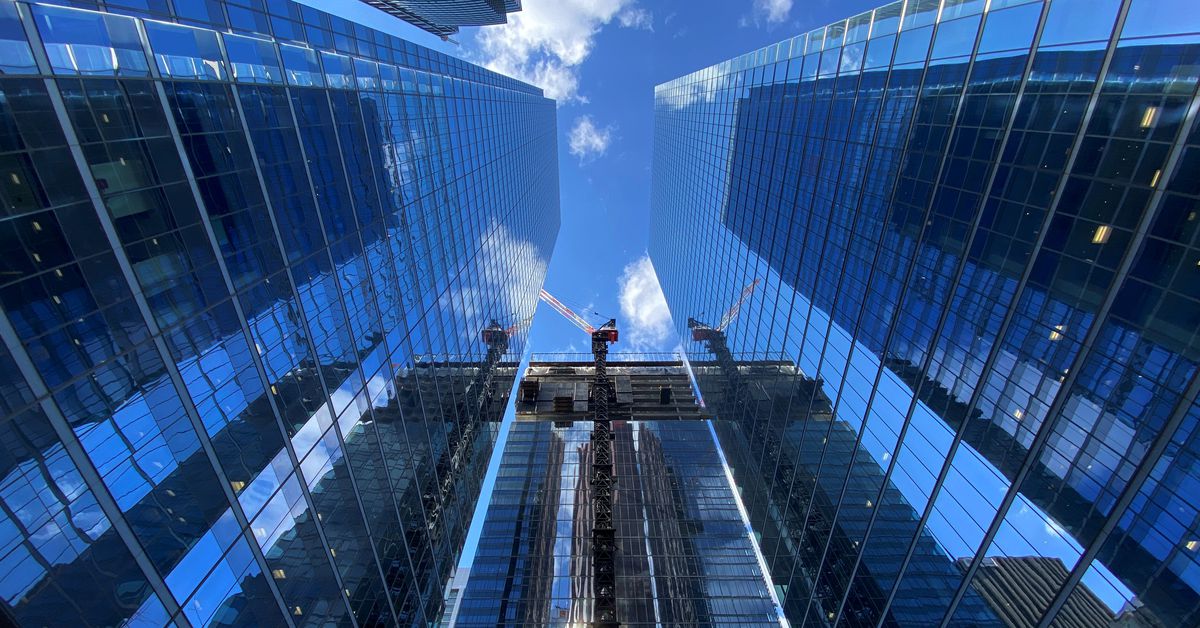 Canada’s economy likely grew by 6.5% on an annualized basis in the first quarter, Statistics Canada said on Friday, though economists warned that the current third wave of COVID-19 infections will weigh in the second quarter.

In a preliminary estimate, Statscan said the economy likely grew by 0.9% in March from February. In February, the economy expanded 0.4%, a 10th consecutive monthly gain, on a rebound in retail trade and on the strength of residential construction.

That was slightly below analyst estimates that gross domestic product would grow by 0.5% in February from January.

The gains, as some controls were eased between the second and third waves of COVID-19 virus spread, put Canada’s first-quarter GDP growth in line with the U.S., said economists. This despite more restrictions and a slower vaccine rollout.

By March, economic activity was likely only about 1% below pre-pandemic levels, Statscan said. But lockdowns imposed in April to curb a another surge in COVID-19 infections will weigh in the coming months.

“Much if not all of the recent progress in non-essential high-contact services industries will likely be reversed during this third wave,” said Royce Mendes, senior economist at CIBC Economics, in a note.

“We’ll have to wait and see how much pain will be inflicted by this latest rise,” he added.

Still, the strength of February and March, where activity rebounded from restrictions imposed in December to deal with the second wave, show how quickly the economy can bounce back.

“The solid performance of many sectors through the winter suggest that any setback in April will likely be quickly recouped in future months,” said Doug Porter, chief economist at BMO Economics, in a note.

The Bank of Canada said last week that it now expects the Canadian economy to grow by 6.5% in 2021 and signaled it could start hiking interest rates as soon as late 2022.

Pottsgrove's Parker Janusek is handed the baton by Clint Sullivan during a relay in the Special Olympics Unified...
Read more
Economy

Unemployment claims surged, and 7 other major US economy updates – Quartz

Millions of Americans are celebrating Thanksgiving this week, but the latest data on the US economy shows exactly which areas have the most to...
Read more
Business

As the coronavirus pandemic and COVID-19 cases continue to take a toll on communities across the country, many businesses are also feeling the impact,...
Read more

Biden warns of fatal consequences as Trump stonewalls on the transition, and Whitmer faces more blowback over the restrictions in Michigan. It’s Tuesday, and...
Read more
World News

" majority of those who have licensed guns are well-to-do personalities," said lawmaker Sunday Adepoju during the 2019 debate. "For instance, in a community...
Read more
Sports

On Feb 10, Mastercard announced that it would begin supporting select cryptocurrencies on its payment network. The financial transaction processing company hasn’t specified which...
Read more
Stock

(For a live blog on the U.S. stock market, click or type LIVE/ in a news window)* Apple jumps on report of higher iPhone...
Read more

ToplineStocks are floating near-record levels Tuesday as the biggest week for quarterly tech earnings revs up, and though experts have been warning of concerning...
Read more
Cryptocurrencies

The Five Best Cryptocurrencies to Invest in 2021 – Investment U

<!-- --> The best cryptocurrencies… The mere thought of such a list is enough to make many of the best investors snicker. And then...
Read more
Stock

In this article, we will present the 10 best stocks to invest in according to the billionaire biotech hedge fund manager Joe Edelman. Click...
Read more