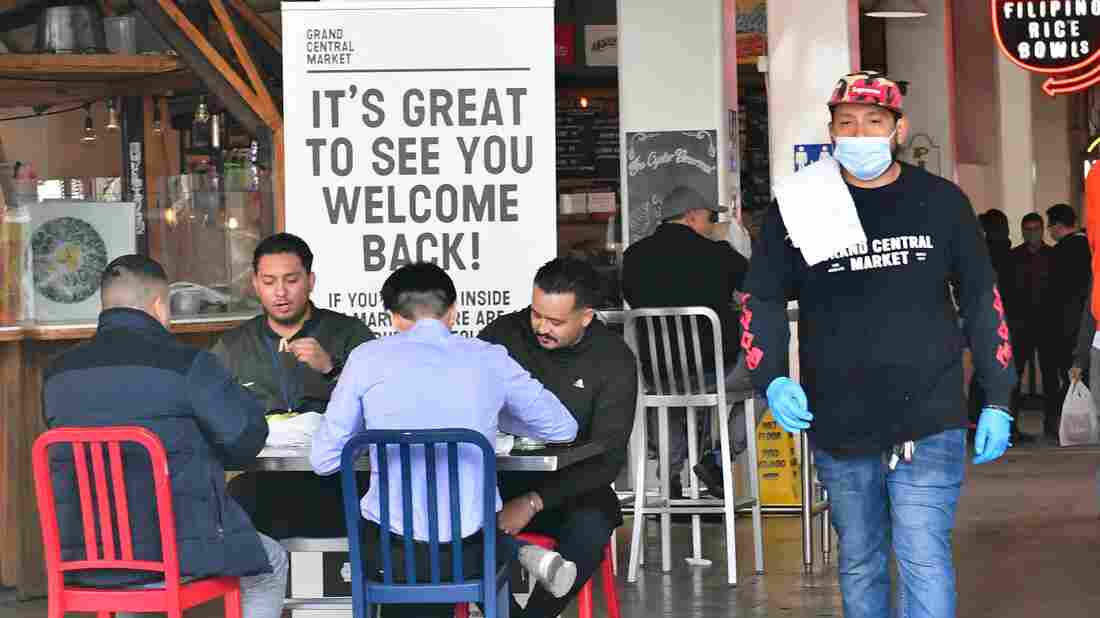 People enjoy lunch at Grand Central Market as indoor dining reopens in Los Angeles on March 15. The U.S. economy expanded at a rapid pace in the first three months of the year and is expected to grow at its fastest rate since 1984. Frederic J. Brown/AFP via Getty Images hide caption 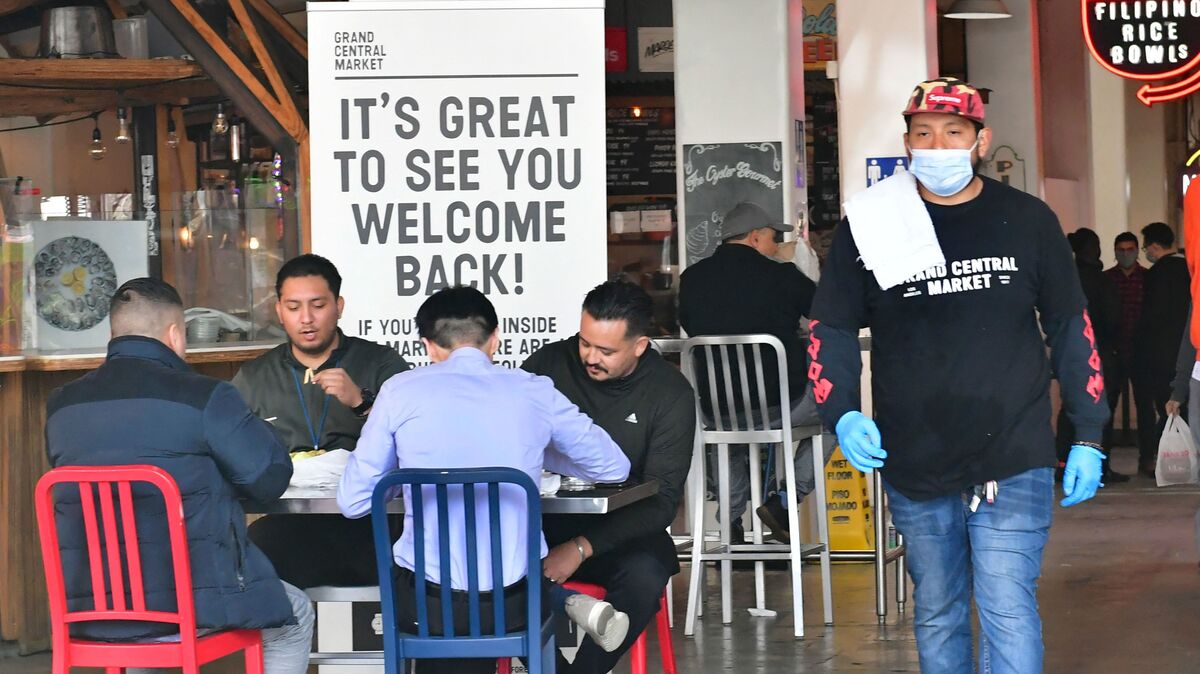 People enjoy lunch at Grand Central Market as indoor dining reopens in Los Angeles on March 15. The U.S. economy expanded at a rapid pace in the first three months of the year and is expected to grow at its fastest rate since 1984.

The U.S. economy expanded at a rapid pace in the first three months of the year, setting the stage for what’s expected to be the strongest annual growth in nearly four decades.

According to the Commerce Department, the economy grew at an annual rate of 6.4% between January and March as millions of Americans got vaccinated against COVID-19 and the federal government spent trillions of dollars to counteract the effects of the pandemic recession.

“The $1,400 paychecks that hit consumer mailboxes in March made a difference,” said Nela Richardson, chief economist at the payroll processing company ADP.

Federal relief payments coincided with a nationwide vaccination campaign. More than 140 million Americans have so far received at least one shot.

“I think that’s made a huge impact on confidence in the economy as things are starting to reopen and more people are inoculated against this disease,” Richardson said.

The data comes a day after President Biden told Congress that “America is on the move again” as he touted his administration’s work to end the coronavirus crisis.

Strong consumer spending in January and March helped to offset a February slump, when much of the country was hit with severe winter weather. In quarterly terms, the economy was 1.6% larger than in the final three month of 2020.

The expansion of the U.S. economy during the quarter is a marked contrast to the Eurozone, where vaccine rollout has been slower and restrictions on business more severe. Forecasters expect Europe to report an economic contraction for the first three months of the year.

“The course of the virus determines the course of the economy,” said Diane Swonk, chief economist at Grant Thornton. “What we’ve seen in the Eurozone is really the mantra we’ve had to live with for the last year.”

The U.S. economy shrank by 2.5% last year as a result of the pandemic, but forecasters expect a strong rebound this year — a turnaround Biden pointed to in his address to a joint session of Congress on Wednesday night.

“The International Monetary Fund is now estimating our economy will grow at a rate of more than 6% this year,” Biden said. “That will be the fastest pace of economic growth in this country in nearly four decades. America is moving, moving forward.”

Swonk at Grant Thornton said the economy could grow at its fastest rate since 1984.

The jump in demand is already straining factories and transportation networks and triggering shortages of lumber, steel and computer chips.

“The bottlenecks are everywhere,” Swonk said.

The Federal Reserve expects somewhat higher inflation this year but insists it’s not concerned that prices will spiral out of control.

“During this time of reopening we are likely to see some upward pressure on prices,” Fed chairman Jerome Powell said Wednesday. “But those pressures are likely to be temporary.”

The tourism and entertainment industries are hoping for a recovery during the spring and summer as pandemic restrictions are eased and more people feel comfortable doing things that were off-limits for much of the past year.

“You have a lot of people with some pretty robust savings, itching to get back to former pastimes like going to a movie or traveling,” Richardson said. “Those hard-hit industries have the most to gain from the safe reopening of the U.S. economy.”

While gross domestic product is expected to bounce back to its pre-pandemic level this spring, the labor market will take longer to recover. Of the 22 million jobs that were lost last year, employers have yet to restore more than 8.4 million.

What’s more, million of people have dropped out of the workforce during the pandemic. Some are worried about returning to jobs so long as the virus is still spreading rapidly.

Other people are unable to work because they are busy caring for sick relatives or for children whose schools have yet to reopen.

As of mid-April, some 16.5 million Americans were receiving some form of unemployment assistance. More than 5.6 million of those were on extended benefits for people who have been out of work more than six months.

“That is concerning because the longer you’re out of the workforce, the harder it is to get back in,” Richardson said. “The scarring is there. And how long it will take to work off those scars is still a big question hanging over the labor market.”

The world reacted in a unified manner - ArtetaArsenal manager Mikel Arteta says owner Stan Kroenke has apologised to him over the club's aborted...
Read more
Business

The Securities and Exchange Commission sued the company behind one of the most valuable cryptocurrencies on Tuesday, raising fundamental questions about the viability of...
Read more
Sports

Friday was confusing. Documents were emailed to media. Websites that allegedly outline the state’s entire sports policy during coronavirus weren’t updated (and then they...
Read more
Sports

WEST GOSHEN >> There will be quite a few new faces on the field and the sidelines...
Read more
Stock

USA Rare Earth LLC, a mining company focused on resources essential to technology but dominated by China, is considering a stock-market listing this year...
Read more