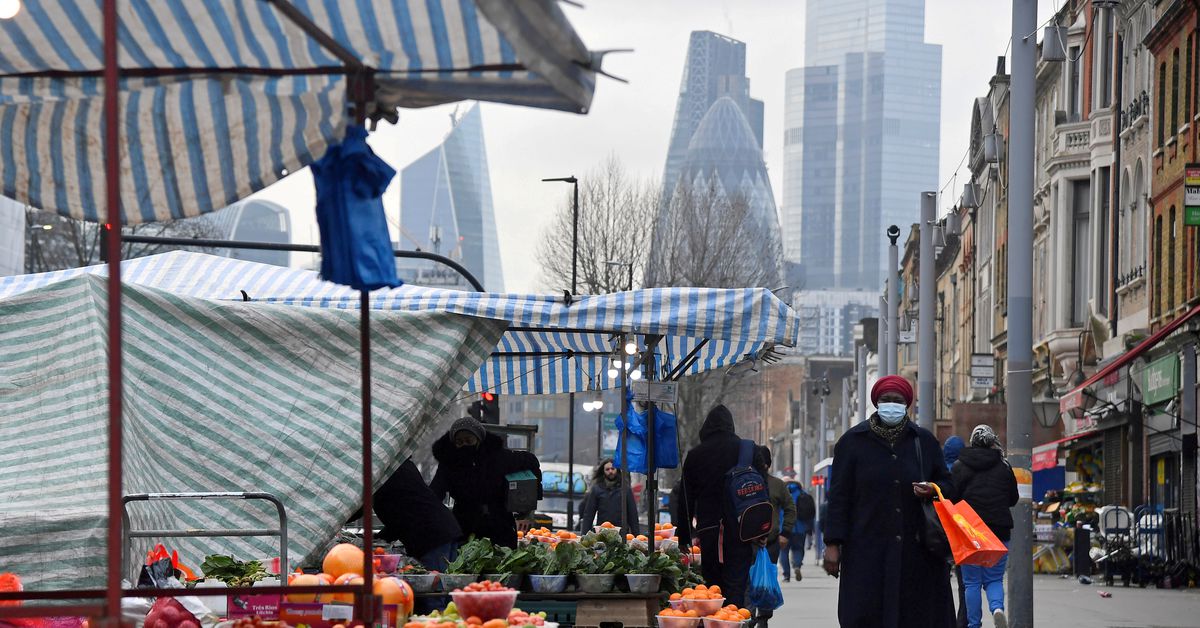 People shop at market stalls, with skyscrapers of the CIty of London financial district seen behind, amid the coronavirus disease (COVID-19) pandemic, in London, Britain, January 15, 2021. REUTERS/Toby Melville

Britain looks set to see faster economic growth than the United States this year as the country races ahead with its vaccination programme after its slump in 2020, Goldman Sachs said on Sunday.

The bank said in a note to clients that it now expects British gross domestic product to grow by a “striking” 7.8% this year, “above our expectations for the U.S.”

Previously, Goldman had expected Britain’s economy would grow by 7.1% this year and its forecast for U.S. growth in 2021 stands at 7.2%, helped by U.S. President Joe Biden’s huge fiscal stimulus programme.

A Reuters poll of analysts published on April 13 showed an average forecast for growth of 5.0% in the UK, the world’s fifth-biggest economy, in 2021. The International Monetary Fund has projected a 5.3% expansion.

But since those forecasts were made there have been signs of an acceleration in the pace of recovery with the country now having given a first coronavirus vaccine to more than half of its total population. read more

“The UK economy is rebounding sharply from the Covid crisis,” Goldman Sachs said.

“The April flash PMI was much stronger than expected in the UK, with the services PMI moving strongly further into expansionary territory,” it said.

The bank also noted a much-stronger-than-expected 5.4% monthly jump in retail sales in March.

On Saturday, Bank of England Deputy Governor Ben Broadbent was quoted as saying he expected “very rapid growth at least over the next couple of quarters” as the country lifts its coronavirus restrictions. read more

Here is a remarkable, underappreciated fact: The U.S. economy has performed far better than that of many of the country’s peers during this...
Read more
World News

"Likewise, I also delved into books marketed for adults for the first time, reading adult fantasy and sci-fi books as beforehand, I had only...
Read more
USA

With dozens of cases reported in Antarctica, COVID-19 has now infected every continent – USA TODAY

For months, the hundreds of scientists and researchers who live in Antarctica have inhabited the only continent in the world without a reported case...
Read more

As a lengthy discussion about the start date of the winter season continued, Thom Holdgate, a co-chair of the Massachusetts Interscholastic Athletic Association’s COVID-19...
Read more
Stock

Traders work on the floor of the New York Stock Exchange.NYSEThe case for stocks to carry higher through the end of the year is...
Read more
Cryptocurrencies

It wasn't even a month ago that PayPal announced that it would let its customers use cryptocurrencies and hold them in their wallets, but...
Read more

Getty Images Once more Chelsea find themselves in the market for a new head coach, Frank Lampard having gone the way...
Read more
Business

News broke this morning that real GDP grew at an annualized rate of 33.1% in the third quarter...
Read more

Here’s what you need to know:The closed port at Dover on Monday evening.Credit...Andrew Testa for The New York TimesGrowing alarm over an outbreak of...
Read more
World News