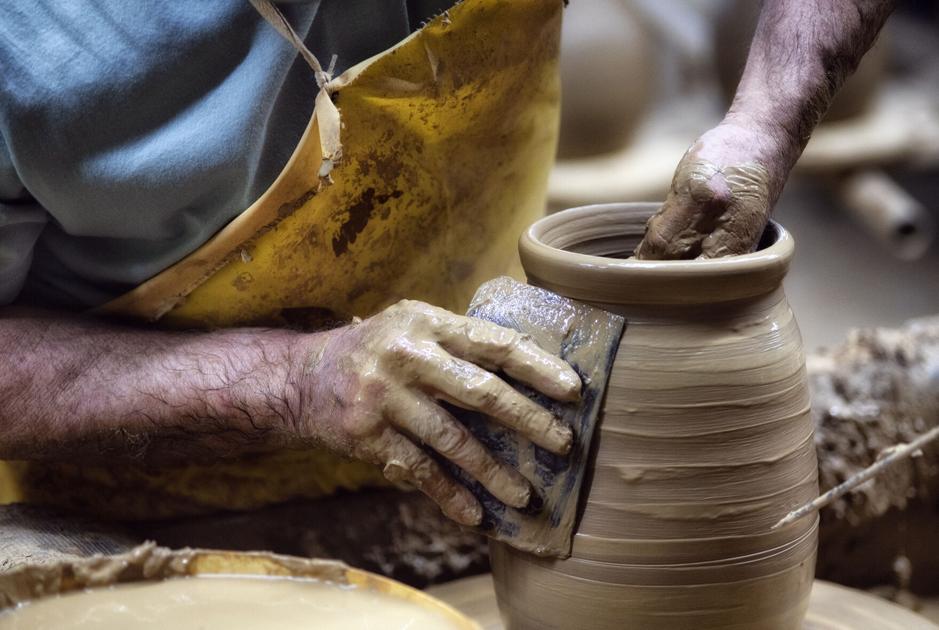 GILLSVILLE, Ga. (AP) — Hours before the crack of dawn, Billy Joe Craven turns on his potter’s wheel, transforming blocks of clay into commercial pottery and works of art.

Although the founder of Craven Pottery Inc. in Gillsville announced his retirement over seven years ago, the 73-year-old still produces around 100 pieces a day.

“When I retired I went home and sat on the porch for a little while, and realized I can’t sit on the porch,” Craven said while making a large pot. “So, I kept coming back. They named me ‘Boomerang.'”

This year Craven’s business turned 50 years old. It was mid-March in 1971 when his first two customers pulled up to his shop. They were Ira Goin and Elvin Owen, who lived in North Carolina. Descendants of this family still buy from Craven Pottery Inc. to this day.

Marcia Craven Stamey, Craven’s daughter, said her father likes to say he’s been “Owen and Goin all his life.”

After his first year in business, Craven said his gross sales came out at $25,000, and over the years quickly grew into a multimillion dollar company that distributed all over the U.S. with partners across the globe.

“My career was blessed with a lot of good people,” Craven said. “I take very little credit for what happened.”

Living in Gillsville, Craven said he was exposed to the rich pottery culture of the town, learning how to make his first piece when he was around 11 years old. Both Craven and his younger brother Mike are ninth generation potters with Georgia red clay running deep in their roots.

When Craven was 14 years old, he went to work for the Hewell family, who has a lineage of potters dating back to 1850. Craven said Harold Hewell taught him the craft of commercial pottery, setting him to work for years.

“I never dreamed I’d be in the pottery business,” Craven said, chuckling. “The only reason I never moved was because I didn’t have enough money to get a bus ticket.”

After Craven graduated from high school and started going to college, he said Hewell approached him and said he would sell him half the business if he went back to work with him.

Craven took up the man’s offer, then 19 weeks later he was drafted into the U.S. Army. He served from late ’66 to late ’68, doing a tour in Vietnam.

When he returned from Vietnam, he went back into business with Hewell until 1970 — the day he quit.

Craven said he was raising two kids in a 12-by-60-foot mobile home and felt like it was time to start his own pottery shop.

“It was tough starting out, we didn’t have any money,” he said. “I borrowed $10,000 from my daddy, and that was his life savings back then. And, we made it somehow.”

Craven said he quickly learned that there’s three things in business that people need to have to succeed: God, family and “you’ve got to give 110% of yourself to the business.”

“I got those three things mixed up sometimes, but I’ve had a good life experience,” he said. “I managed to build a big company.”

Craven said his younger brother, Mike, was the first staff he ever hired. Mike worked with him for around 30 years before opening up his own shop in 2007, which is called “Craven Family Pottery.”

Craven said Craven Pottery Inc. went from serving as a one-man operation in Gillsville to having a staff of 368, four locations and 20 connected side businesses.

He noted that his first step to becoming a pottery giant in the U.S. started with KMart. In 1975, Craven said he packed his bags and flew to the retailer’s headquarters in Michigan.

Without an appointment and wearing blue jeans, he remembers strolling past men dressed in three-piece suits and asking to speak with someone who oversees the garden department.

Luckily, the company gave him the right person to talk to. Walking up to the man, Craven said he set a little flower pot on his desk.

“I said, ‘I made that,'” Craven recounted. “He turned around to the United States map and said, ‘We’ve got 1,600 stores. Can you service all those stores?'”

Craven replied with, “No, sir.”

Changing gears, the man offered him another proposition — supplying 239 stores in the Southeast with pottery pieces. Craven took the offer.

“He gave me the order, and I walked out of his office,” Craven said. “On the airplane coming home, I got to counting it up, and it would take me 20 years at my current rate of production to fill that one order.”

Rounding up his friends back home, Craven said he trained more staff to help supply his hefty deal.

“I never did fill the man’s orders, but I stayed in touch with him and had a good relationship with him,” the potter said. “He was still buying what I was making.”

During that same year, Craven said he came across a broken piece of terracotta pottery and noticed its Italian origins. He added that it was “the prettiest clay” he’d ever seen.

Sure enough, Craven said he went to his trailer home, snatched up his Army duffel bag, lifted up his mattress and grabbed a handful of cash.

Craven traveled to Italy and met with the manufacturers who made the piece of pottery he found, and cut them a deal. The Italian company would make pottery pieces for him that he would in turn sell across the U.S.

Craven said he went back to KMart’s headquarters and told them he could now supply 1,600 stores.

In the years following, Craven went on to make other international connections, expanding his imported work in Thailand, Taiwan, Hong Kong, Haiti, Mexico and other countries.

When Craven decided to retire at 66, he said he shut down all of his businesses and international partnerships to focus on pottery production in Gillsville.

Today, Stamey, who manages the company’s sales, said they still work with Tractor Supply Co., Walmart and wholesale clients. Craven currently operates the shop with a staff of five.

Some of their popular products include jack-o’lantern pots, face jugs, Rebecca pitchers and strawberry jars, which are large pots used to grow strawberries.

Despite the long hours of hard labor and the perpetual moisture that causes his hands to become tender, Craven said he has loved every second of his craft.

“I never did go to work a day in my life,” he said. “I never have been at work because I enjoy what I do everyday to the fullest.”

When Craven can no longer turn pots, Stamey said the family’s legacy will carry on through her 24-year-old niece, Savannah Craven Arnold. Like Craven, Stamey said Arnold has quite the potter’s gift.

“She’s amazing,” Stamey said. “When she does come (to the pottery shop), she and Daddy get to work on that glaze. He’s been good medicine for her. They have a neat bond.”

Craven Pottery Inc. is celebrating its 50th anniversary from 10 a.m. to 3 p.m. Saturday, May 8, at the shop’s headquarters on 6640 Highway 52 in Gillsville. The event is free to the public and will feature many local potters.

The USMNT faced off against Jamaica in Austria and came away with a 4-1 win and a really fun performance. This continues the trend...
Read more
Economy

"CLORALEN Disinfectant Bleach is the first product in AlEn's portfolio of household cleaning and laundry products, designed to be a trusted source of disinfection...
Read more
Cryptocurrencies

The akoin cryptocurrency, created by famous singer and philanthropist Akon, has started trading on a global crypto exchange. It...
Read more
Stock

‘It is bleak’: How the pandemic economy has affected LGBTQ people – NBC News

It’s been over a year since Michael Bates, a massage therapist, has worked with a client.One year ago, he was recovering from pancreatic cancer,...
Read more
USA