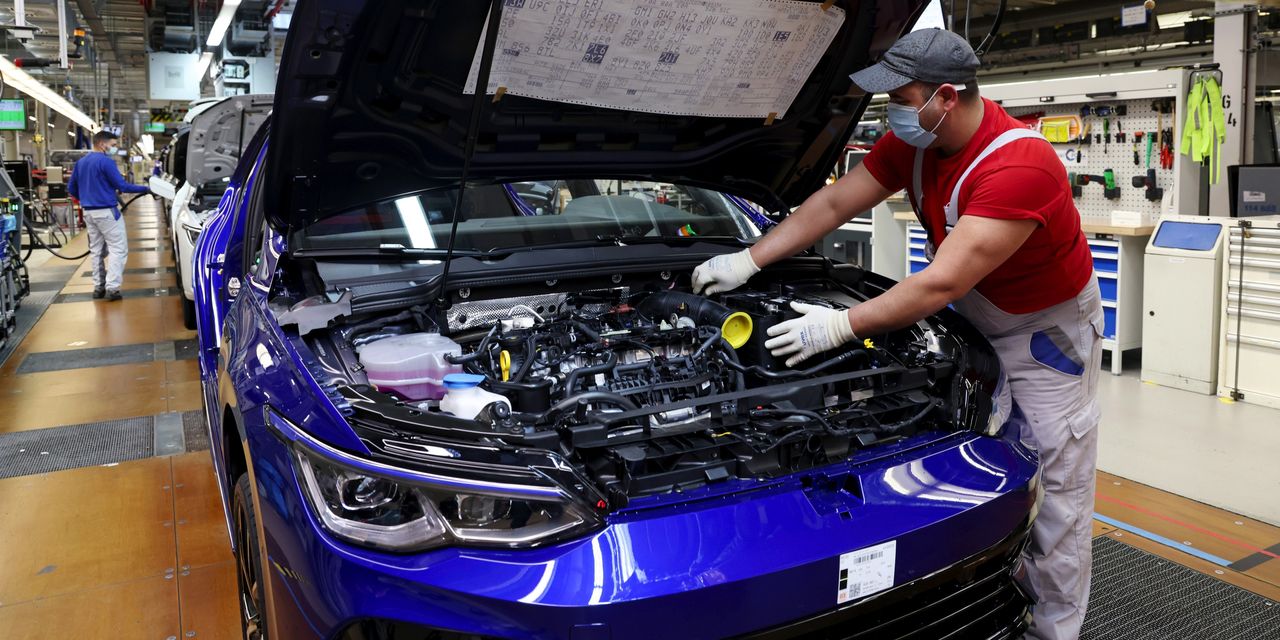 The U.S. and global economies are showing signs of stronger growth as factories continued to boom and service businesses began to see the benefits of vaccination programs.

After a big contraction in 2020, the global economy is forecast to rebound strongly this year as vaccination programs allow more parts of the services economy to reopen fully. There were already signs of that rebound in the U.S. and China during the early months of the year, but surveys of purchasing managers released Friday indicate that Europe is also starting to participate in the recovery.

Threats to the recovery remain, not least the possibility that new variants of the Covid-19 virus will prove more resistant to vaccinations and more easily transmitted. Restrictions on activity remain in many parts of the world, and India Thursday reported the world’s biggest ever single-day jump in new infections.

Data firm IHS Markit said its U.S. services index jumped to 63.1, up from 60.4 in March—the highest reading since data collection began in 2009, signaling the swiftest pace of expansion in at least 11 years. Services companies reported surging growth in new business, buoyed by stronger client demand and relaxing of restrictions.

U.S. manufacturers reported an upswing in April activity despite struggles to source raw materials, which drove up backlogs, according to surveys carried out by IHS Markit. The purchasing managers index for the U.S. factory sector climbed to 60.6 so far this month, up from 59.1 in March.

“The U.S. economy is enjoying a strong start to the second quarter, firing on all cylinders as loosening virus restrictions, an impressive vaccine rollout, a brighter outlook and stimulus measures all helped boost demand,” said Chris Williamson, chief business economist at IHS Markit.

Many countries in Europe retain restrictions on services that require close physical proximity and on most forms of international travel. But the surveys recorded the first expansion of activity in its dominant services sector since August 2020, while its manufacturing sector continued to enjoy strong growth.

The eurozone economy likely contracted in the first three months of the year, reflecting still high infection rates and a slow start to vaccination programs. But the April survey points to a return to growth in the second quarter.

Businesses appear to be preparing for a pickup in activity, with purchasing managers reporting the strongest new hiring since November 2018, driven by factories that saw new orders rise at a record pace.

There are continuing signs that the pace of the global manufacturing recovery was straining supply lines, which may prove to be a drag on growth. In the eurozone, businesses reported the largest rise in waiting times for delivery of supplies in the survey’s 23-year history, while the prices they paid for their inputs rose at the fastest pace in a decade.

Although Europe’s vaccination drives have been beset with supply hiccups and worries over side effects, they have picked up pace in recent weeks and that has made households more hopeful about their prospects. A separate survey by the European Commission released Thursday found that consumer confidence hit a pandemic high in April after a surprisingly sharp rise from March.

In contrast to much of the rest of Europe, the U.K.’s vaccination drive has kept pace with that of the U.S. That has spurred optimism among businesses and households that the country will be able to reopen the large parts of its economy that have been frozen over much of the past year by the end of June.

Some restrictions were lifted in April and that had an immediate impact on growth, with the survey of purchasing managers recording the strongest increase in activity since November 2013.

The surveys also pointed to a pickup in Japan, where activity in the services sector has also been subdued. Indeed, the composite Purchasing Managers Index for the country—which measures activity in the services and manufacturing sector—rose to 50.2 in April from 49.9 in March, pointing to an expansion for the first month since the pandemic struck.

However, a full reopening of the economy remains many months away. The government Thursday said it would re-establish a state of emergency on Sunday in Tokyo and other major cities after crowds came back to urban centers and infections surged again. the emergency in Tokyo, Osaka, Kyoto and the prefecture that includes Kobe would last for 17 days, until May 11, covering the Golden Week holidays in the first week of May.

Australia has contained the pandemic more tightly than Japan and Europe, and the surveys point to strong growth in its economy during April. The composite PMI rose to 58.8 from 55.5 in March, the highest reading since the series began in 2016.

Write to Paul Hannon at paul.hannon@wsj.com and Gwynn Guilford at gwynn.guilford@wsj.com

A local commentator, discussing the State of the Nation Address delivered by the President on February 11, bemoaned the ‘lack of substance’ in the...
Read more
World News

Here’s what you need to know:Midtown Merry Christmas Trees in Nashville this month. Tennessee is reporting the country’s most coronavirus cases per capita.Credit...Whitten Sabbatini...
Read more
USA

The USA entered its Feb. 21 matchup against Brazil level on points but cleared its path towards the tournament title with a 2-0 victory...
Read more

By Jan Strupczewski6 Min ReadBRUSSELS (Reuters) - Struggling to get its vaccine campaign and economic recovery plan in gear, Europe can only watch with...
Read more
Economy

COVID is receding, and markets are rising; those are the two trends that investors have most on their minds right now. It’s entirely sensible...
Read more

January 7, 2021 6 min read Opinions expressed by Entrepreneur contributors are their own. When I...
Read more
World News

The latest: Alberta will expand its vaccine rollout to include people under age 75 starting March 15. EU, Italy stop AstraZeneca vaccine exports to Australia in the first...
Read more
World News

Stocks Rise Ahead of Economic Data – The Wall Street Journal

Stocks edged up Friday ahead of fresh data on the services and manufacturing sectors that are expected to point to a robust economic recovery....
Read more
Cryptocurrencies

One of the things that 2020 will be remembered for is when the cryptocurrency creed emerged from its corner and took centre stage in...
Read more
USA

USA TODAY'S coverage of the 2020 election and President-elect Biden's transition continues this week as states certify their vote counts. President Donald Trump has yet...
Read more