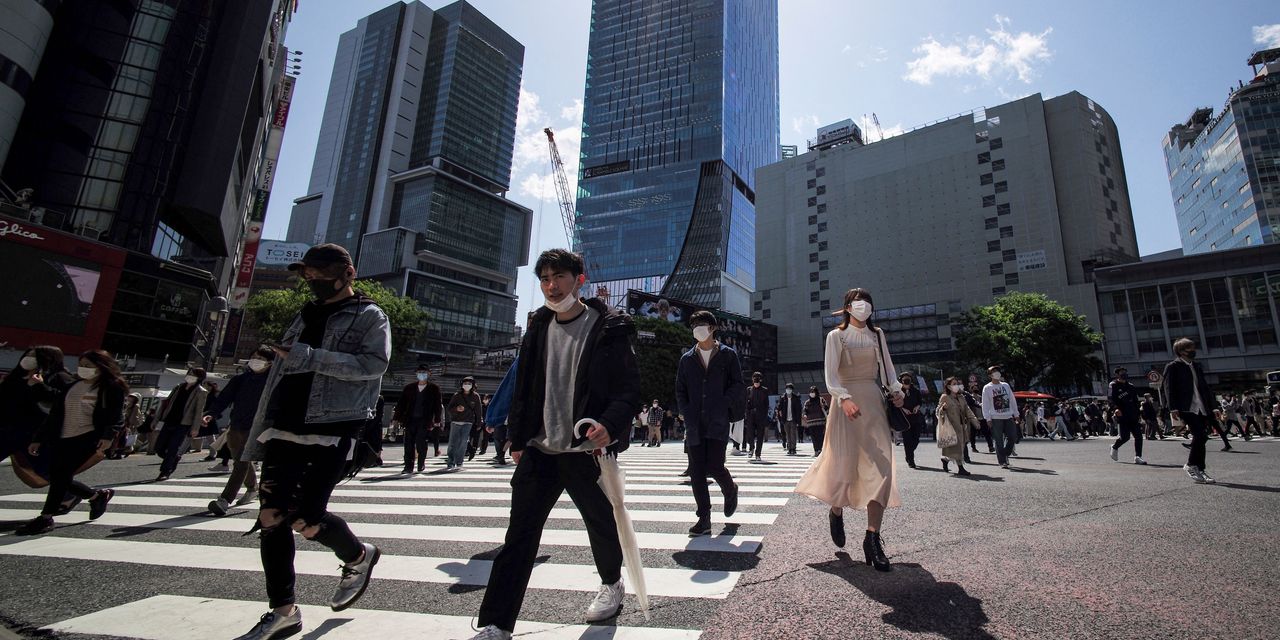 TOKYO — Asian shares gained Monday amid cautious optimism about a global rebound from the coronavirus pandemic.

Japan’s benchmark Nikkei 225 NIK, +0.01% bounced between slight gains and losses and was last up 0.2%, the first market reaction after a summit by Prime Minister Yoshihide Suga with President Joe Biden over the weekend. Suga also spoke with the Pfizer chief executive, asking to ensure a more steady supply of the company’s COVID-19 vaccine. Japan has lagged other nations in a vaccine rollout, with barely 1% of its population inoculated so far.

The government measures against COVID-19 infections already in some urban areas, including Tokyo, are being expanded to more parts of Japan, starting Tuesday, but the cities of Tokyo and Osaka are considering strengthening them to a “state of emergency.” Japan has never had a lockdown, and its laws would need to be changed for such action.

Yoshimasa Maruyama, chief market economist at SMBC Nikko Securities, said that although the promised vaccine after Suga’s U.S. visit works as a plus for Japan, their agreement to take a stiffer stance on China adds to investor worries because of China’s importance for the Japanese economy.

Suga likely had hoped Biden would more forcefully expressed his support for the Tokyo Olympics, set to open in July, despite widespread public worries about the pandemic and opposition to holding the Games. The joint statement refers to the U.S. support for Japan’s “efforts to hold a safe and secure” Games.

“The Suga administration has taken a risk in China relations, in accordance to the U.S. request,” Maruyama said.

U.S. stocks have rallied in recent weeks amid a string of encouraging reports on hiring, consumer confidence and spending that point to an accelerating U.S. economy. COVID-19 vaccinations, now reaching half of the U.S. population, and massive support from the U.S. government and Federal Reserve are fueling expectations for solid corporate profit growth as more businesses reopen.

The last round of stimulus from the government helped lift retail sales, and investors now have to weigh other proposals in Washington, which include investments in infrastructure and potential tax changes.

Investors are also focusing on the global economic recovery. Earnings reporting season is approaching, and expectations are high for companies to show they are recovering from the pandemic. Dozens of U.S. companies are report results this week, including Coca-Cola, Johnson & Johnson, Verizon Communications, Dow Chemical and American Airlines.

Sometimes, things just pop up out of thin air. That was the case with Hannah  Dinkel’s pop up shop. “Hannah Katherine Boutique” at Troy University’s...
Read more
USA

For more than a year, people at the highest levels of the Louisiana State University athletic department fielded complaints about their prized running back,...
Read more
Cryptocurrencies

Jenna Hare does a little bit of everything for any Sullivan East sports team of which she is a member.Lately, the sophomore sensation...
Read more
European Premier League

Barcelona will take on Paris Saint-Germain in a mouth-watering Round of 16 clash after the Champions League draw was made in Nyon, Switzerland on...
Read more

Getty Images After ending January on a strong note, Liverpool has seen its fortunes take a complete turn this month. The...
Read more
USA

BUFFALO, Minn. – Five people were injured and a suspect was in custody Tuesday after a shooting at a health clinic in Buffalo, Minnesota, officials said.The shooting happened...
Read more
World News

2021 Rugby World Cup scheduled to be hosted in New Zealand between September 18-October 16; recommendation to postpone for a year to...
Read more