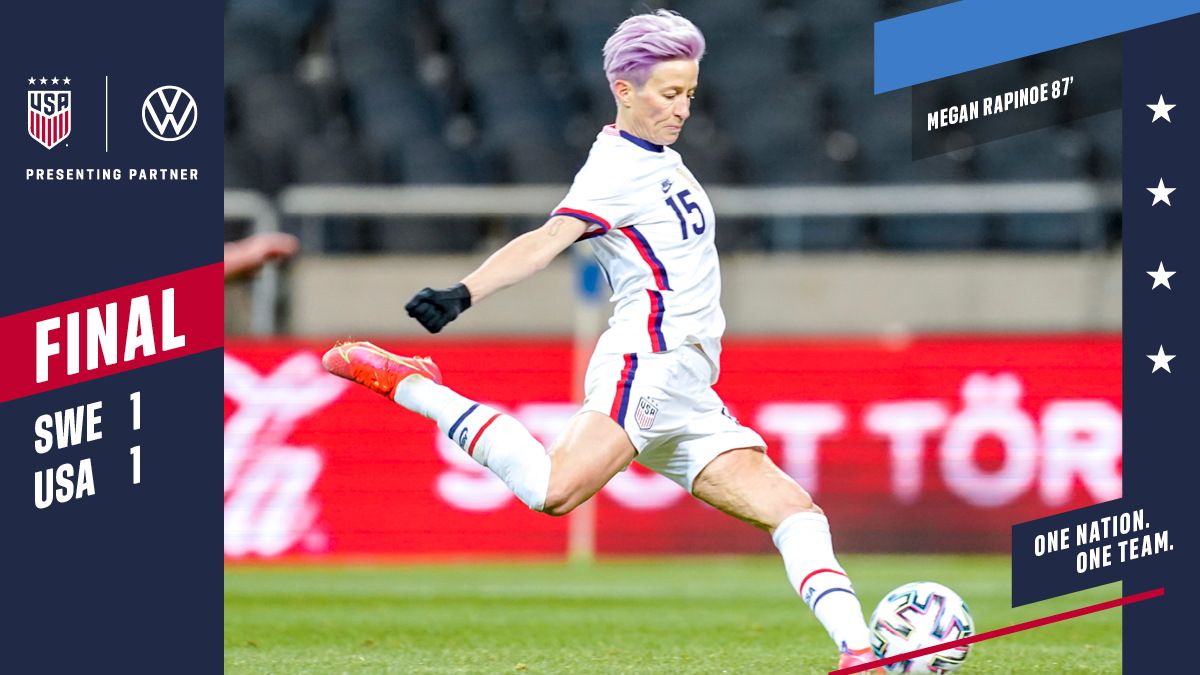 STOCKHOLM, Sweden (April 10, 2021) – A late Megan Rapinoe penalty kick helped the U.S. Women’s National Team secure a 1-1 draw against Sweden in an international friendly between two of the world’s top-five ranked teams on Saturday evening at an empty Friends Arena.

The match not only extended the USA’s undefeated streak to 38 games, but also marked the 300th career cap for legendary forward Carli Lloyd, who became just the third player – female or male – in the history of international soccer to reach the milestone. Lloyd joins fellow USWNT greats Kristine Lilly (354) and Christie Pearce Rampone (311) in the 300 Cap Club.

Entering the match with a perfect 5-0-0 mark in 2021, the top-ranked USWNT knew from the beginning of the match that fifth-ranked Sweden would prove a tough test as the home side pressured the Americans across the field. While the Americans ended up out-shooting Sweden, 20-9 and 6-2 in shots on goal, Sweden was extremely organized on defense and dangerous on transition via some of Europe’s best forwards.

Lloyd nearly opened the scoring after twenty minutes on a header off a cross from Julie Ertz that sailed high. Perhaps the best chance came minutes later when a driven shot from Rose Lavelle forced a quality diving save by Swedish goalkeeper Jennifer Faulk. Lloyd then again went close on a shot from left that skipped wide just past the far post.

The home side would take the lead past the half hour mark on a set piece as towering forward Lina Hurtig rose high to head in a corner kick from Kosovare Asllani, marking the first goal the USA has allowed since March 12, 2019 against Japan, and ending a run of six straight clean sheets. It was also the first goal scored on USA goalkeeper Alyssa Naeher in 10 matches.

Naeher would come up huge just before the break by denying forward Fridolina Rolfo on a one-on-one opportunity that came from a USA give-away to keep the match within reach.

The USA was fortunate not to concede a second some ten minutes into the second half when forward Sofia Jakobsson was sprung free down the center. Naeher did well to come off her line, close the angle, and force Jakobson wide left. Her cross with an empty net was misplayed by another Swedish attacker near the six-yard box and the USA was able to clear.

The USA created a number of solid chances throughout the final 45 minutes, firing 13 shots to Sweden’s three, but Falk was up for the challenge, denying a point-blank header from Lloyd, making a diving save on a Lavelle shot through traffic, and stone-walling Rapinoe’s near-post shot from seven yards out.

Rapinoe, who came on in the 57th minute, would get the last say, burying a penalty kick with three minutes left for her team-leading sixth goal of the year after Kelley O’Hara was chopped down on the right edge of the penalty area. The goal was Rapinoe’s 58th of her career, moving her to within two of tying Shannon MacMillan and Christen Press for ninth on the all-time list.

The USA created a few excellent chances to win the game at the end, the best ones coming through substitute Kristie Mewis, but her shot from just outside the six-yard box was blocked and then another shot after a scramble from close range went just wide right. While the draw ended the USA’s – and head coached Vlatko Andonovski’s, 16-game winning streak – it kept alive the team’s undefeated streak. The USA is now 34-0-4 since its last defeat in January 2019 against France. The 16-game winning streak was the third-longest in USWNT history.

The USA will close out its two-game European trip when it travels to Le Havre to take on third-ranked France on April 13. That match will be played at Stade Océane at 3 p.m. ET / 9 p.m. local on ESPN2.

SWE– Lina Hurtig (Kosovare Asllani), 38th minute: The USA found itself in an unfamiliar situation when it conceded first and trailed for the first time in Andonovski’s tenure as head coach. Sweden’s Lina Hurtig set up on the penalty spot as Kosovare Asllani swung in a right-footed corner kick from the left side. As the ball came in, Hurtig rushed to the near post and rose above everyone, flicking the ball back and off the far post for the early lead. It was her 11th international goal. USA 0, SWE 1

USA – Megan Rapinoe (Penalty Kick), 87th minute: Rapinoe had consecutive corner kicks from the left side cleared over the end line by the Sweden defense. On the third, Lindsey Horan nearly got a head on it, but the ball flicked on to the right side of the penalty area and fell to O’Hara, who took a hard touch forward and was tripped by Sofia Jakobsson on the right edge of the box. Rapinoe stepped up and buried the shot low to the left tie the match. USA 1, SWE 1

Before entering the cryptosphere, it is important to understand the common terminologies and abbreviations. If you don’t, the complex world of cryptocurrencies may be...
Read more
Economy

The U.S. economy likely returned to its late-2019 size during the three months through June, helping to lift global output above its pre-pandemic level...
Read more
Business

The NFIB’s small business optimism index rose 2.4 points in March to 98.2, marking the first return to average levels since last November.  However, the...
Read more

Wearing a rainbow sequin gown she designed herself in honor of Pride Month, Kataluna Enriquez made history last weekend when she was crowned Miss...
Read more

L Subramaniam, 48, who owns ASA Pens, in the southern city of Chennai, spent two decades in the telecoms industry before quitting in 2013...
Read more
Economy

MEXICO CITY, June 17 (Reuters) - Mexico's economy grew 24.8% in May compared with the same month last year, as a recovery from a...
Read more
European Premier League

Photo by Carlos Rodrigues/Getty ImagesBenfica have rejected a £25 million bid from the Premier League for Goncalo Ramos with Bruno Lage’s Wolverhampton Wanderers side...
Read more

NEW YORK--(BUSINESS WIRE)--tZERO, a leader in blockchain innovation and liquidity for digital assets, through its tZERO Crypto unit, announced today that it has launched...
Read more
Economy

Economic growth will be better than expected thanks to the resilient services sector, Goldman says – CNBC

Teresa Nguyen, a respiratory therapist, goes over a patient’s charts inside a room for people with the coronavirus disease (COVID-19) at a hospital in...
Read more
Sports