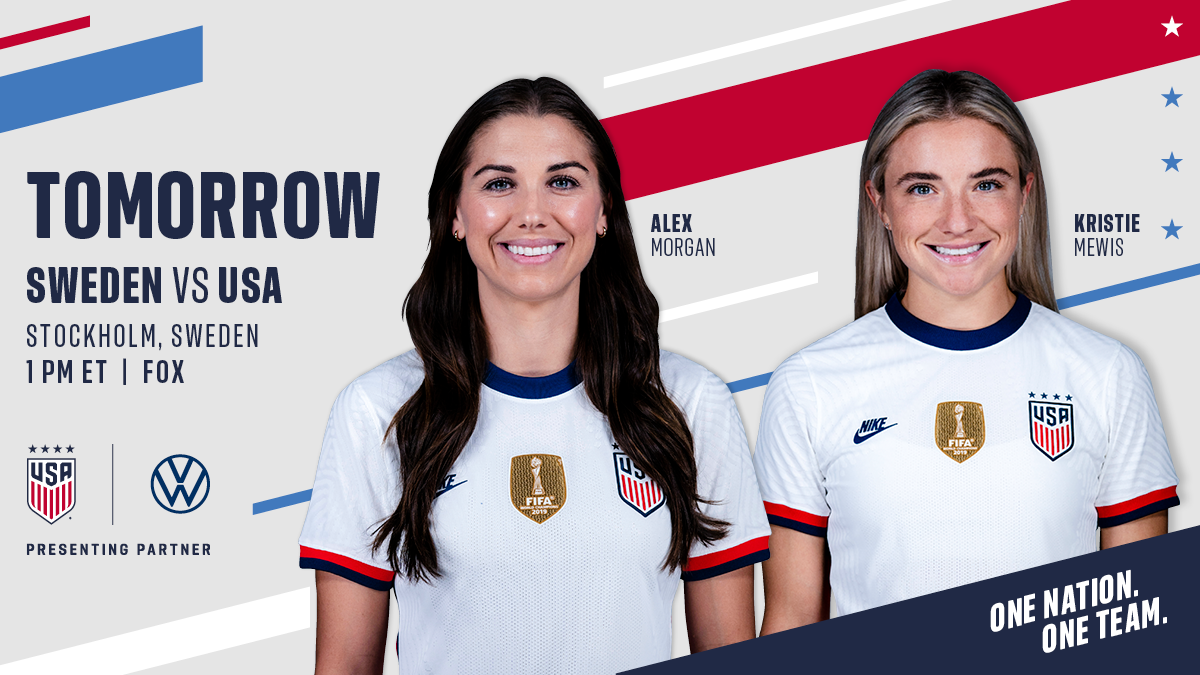 Off to a strong start in 2021 with a 5-0-0 record and a championship at the 2021 SheBelieves Cup in Orlando, the U.S. Women’s National Team returns to the pitch on April 10 against Sweden for the first match of its highly-anticipated two-game European tour. The match against Sweden will be played at Friends Arena in Stockholm (1 p.m. ET/7 p.m. local on FOX) and pits the USA – the top-ranked team in the world – against fifth-ranked Sweden in its first game on foreign soil this year.

Following the match against Sweden, the USA will travel to Le Havre to take on third-ranked France. That match will be played at Stade Océane in Le Havre at 3 p.m. ET / 9 p.m. local on ESPN2 on April 13.

Head coach Vlatko Andonvoski called up 23 players for the two matches against Sweden and France, but only 18 will suit up for each of the two matches, in which each team is allowed six substitutes. Ten players on this USA roster have experience in the Olympic Games. Eighteen players play in the NWSL and the remaining five in Europe, four in England and one in France.

The two-game tilt against Sweden and France marks the fifth trip to Europe for friendly matches that the USWNT has undertaken in as many years, with four of those being two-game sets. In 2017, the USA played at Sweden and Norway in June. In 2018, the USA finished the year with games at Portugal and Scotland. In 2019, the USA started the year at France and Spain, and in 2020 the USA played at the Netherlands in November. During those previous seven friendly matches in Europe, the USA went 6-1-0, but five of those wins were by 1-0 scores, and one, against the Dutch, was 2-0. Le Havre marks the site of the USA’s most recent loss, a 3-1 setback to host France in the first match of 2019. The USA has run up a 34-0-3 record in its 37 matches following that defeat at Stade Océane and has won its last nine games on European soil – seven of which came during the USA’s run to the 2019 FIFA Women’s World Cup title.

U.S. forward Carli Lloyd is close to an historic milestone as her next cap will be her 300th in a U.S. uniform. Only two players – men or women – have played 300 international matches and both are Lloyd’s former teammates, Kristine Lilly (354) and Christie Pearce Rampone (311). Lloyd debuted in 2005 and this is her 17th year of international competition. Through 299 caps, the USA has an overall record of 249-15-35 in games in which she has played, good for a winning percentage north of 89%. She has appeared for the USA in three different decades, at four World Cups and in three Olympic Games. Not only has her longevity been truly remarkable, but her production as well. Her 124 career goals are fourth all-time in U.S. history and her 62 career assists are sixth all-time. While she has played forward in the latter part of her career, she is still the highest scoring midfielder in U.S. history. Lloyd might also add remarkable chapter to her career during this trip as her next goal would make her the oldest player in USWNT history to score a goal. Lilly is currently the oldest player to score a goal for the USA at 38 years, 264 days. Lloyd will be 38 years, 268 days old on April 10 when the USA squares off against Sweden.

The most recent on-field action for the USA ended in a trophy lift as the USA won the 2021 SheBelieves Cup, presented by Visa in emphatic fashion, clinching the championship with a 6-0 victory over Argentina on February 24. After wins over Canada (1-0) and Brazil (2-0) to open the tournament, the USA powered its way to the finish in the final game of the tournament, led by a brace from Megan Rapinoe, first half goals from Lloyd and Kristie Mewis and second-half scores from Alex Morgan and Christen Press. Rose Lavelle was awarded the Visa SheBelieves Cup MVP award for her performance over the course of the tournament.

With the win, the USA clinched its fourth SheBelieves Cup title, becoming the first back-to-back champion in the tournament’s six-year history and the first team to not allow a single goal over the course of the competition.

The USA enters the match against Sweden on a 37-game unbeaten streak and having won its last 16 games overall. The current 16-match winning streak is the third-longest in program history. The USWNT won a record 18 straight matches from July 25, 1990, to May 25, 1991, and recorded 17 straight wins immediately before this run, from March 5 to October 3, 2019.

One driving force behind the win streak has been the USA’s high-octane offense. The USA has scored in 66 consecutive matches – the longest such streak in USWNT history – and has averaged just more than three goals per game in that time. During this 66-game run the USA has outscored the opposition 221-34.

Defensively, the USA has recorded six consecutive clean sheets, last allowing a goal in the 58th minute of its 3-1 victory over Japan on March 12, 2020. During its 16-game winning streak, the USA has outscored the opposition, 60-3. Two of those three goals were scored by Sweden in the first game of the win streak, which was also Andonvoski’s first match as head coach of the USWNT, a 3-2 victory on Nov. 7, 2019 in Columbus, Ohio.

The USA has played Sweden 40 times dating back to 1987 – the fourth most of any country behind Canada, China PR and Norway. In the last 15 matches with Sweden dating back to 2010, the USA is 7-3-5, making for one of the most competitive rivalries among top teams in recent years. This will be the first meeting between the teams since Vlatko Andonovski’s first match in charge of the USA. That came on Nov. 7, 2019 in Columbus, Ohio and the USA won 3-2 on two goals from Carli Lloyd and one from Christen Press. Both of Sweden’s goals were scored by forward Anna Anvegard, who is not on the roster for this match.

While the USA and Sweden have met quite often in world championships – including five times in a row at the World Cup – this will be just the fourth matchup between the teams to be played in Sweden, with the USA winning the previous three meetings.

TEN TEAMS IN, TWO TO GO FOR TOKYO

Ten countries have secured their berths into the Olympic tournament: the USA and Canada from Concacaf, Australia and Japan from Asia, Great Britain, Netherlands, and Sweden from Europe, New Zealand from Oceania and Zambia from Africa. One of the remaining two berths will be decided when Cameroon faces Chile in a two-leg intercontinental play-off scheduled to take place on April 10 and 13 in Antalya, Turkey. The other berth will go to South Korea or China, which opened its two-leg series on April 8 with a 2-1 China victory in South Korea. The visitors took the lead in the 33rd minute in Goyang through Zhang Xin, but the Chinese advantage lasted only six minutes before Kang Chae-Rim equalized for the Koreans. A penalty kick from Wang Shuang in the 73rd minute settled the first leg, giving China the one goal advantage to defend on April 13 in Suzhou. With two away goals conceded, South Korea will need to win the second leg by two clear goals, or score at least three in a victory, to secure their first Olympic appearance.

The Final Draw for the 2021 Olympic Football Tournament was scheduled to take place on April 1 but was moved to April 21 and will be held virtually in Zurich, Switzerland. The women’s draw will place 12 teams into three groups of four teams each.

The Aspen Institute will host two days of online programming on the current state and future of the American economy next week. Dubbed “Aspen Ideas:...
Read more
World News

An unrelenting winter weather pattern – one of the most merciless in years – showed no signs of letting up Tuesday as it left a trail of...
Read more

The federal program intended to save jobs at small businesses during the pandemic supported at least 250,000 workers in Maine but nearly a third...
Read more
World News

A whole three days after the Kankara kidnapping, Boko Haram said it was behind the attack. And, once again, many international outlets presented their...
Read more

“I think the overall prognosis is very good, for a couple of reasons, one there’s just pent-up demand, everything that New Orleans offers, the...
Read more
Cryptocurrencies

What Are The Hottest Cryptocurrencies In China, Korea & Japan? – Forbes

Do Chinese and Japanese cryptocurrency traders have a different take on what's worth buying? Not ... really....
Read more
Cryptocurrencies

John McAfee at a Florida hotel in February 2012. (Michele Eve Sandberg/Corbis via Getty Images)McAfee Antivirus creator John McAfee is being indicted in the...
Read more

The mayor has a plan. Cutting off the lifeblood of cannabis tourism, she believes, will deter that type of visitor and reduce the kind...
Read more
Economy

That’s essentially what has happened in the last few decades as China has gone from being isolated to being deeply integrated in the world...
Read more
USA

The acquisition was made by Tigre USA, a company established in the United States for 15 years. Its market presence opened up gradually, with...
Read more