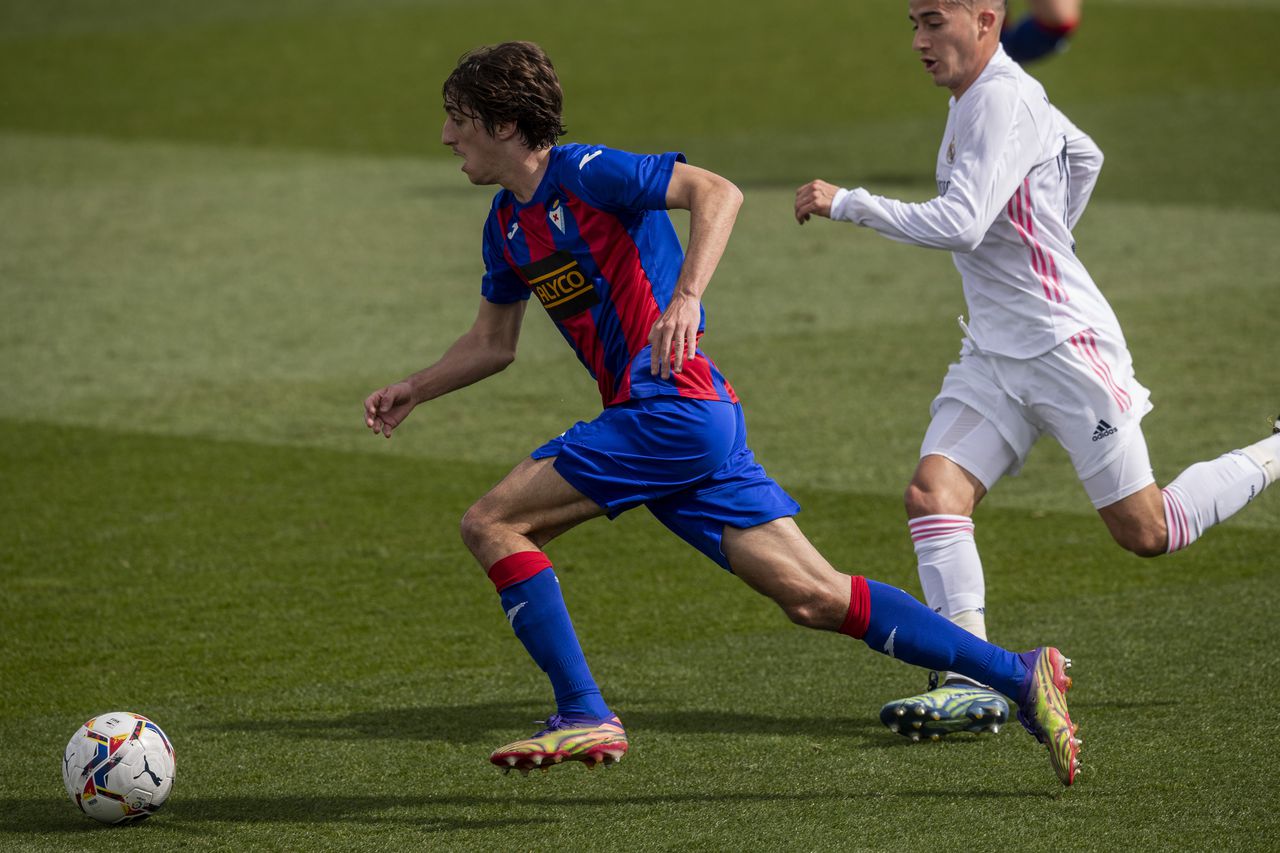 The UEFA Champions League’s Quarterfinals continue this week, with a match between Real Madrid and Liverpool highlighting the four matches of action in the top European football competition on Tuesday, April 6.

Real Madrid vs. Liverpool is one of four Quarterfinal matches scheduled for this week in the UEFA Champions League. The game will be broadcast on TUDN in Spanish. All four matches can be live streamed on fuboTV and Paramount+. Paramount+ is the only place to get all four matches in English for viewers in the United States.

Liverpool finds themselves mired in a terrible season. Last year saw them win the Premier League title, but this year they find themselves sitting in seventh place 27 points from leaders Manchester City. The Champions league appears to be the last hope for Liverpool. They will be looking to star forward Mohamed Salah who has 26 goals on the year to hopefully provide a catalyst as the team pursues a win Tuesday against Real Madrid.

What is the UEFA Champions League TV schedule for the Quarterfinals

Where can I live stream the UEFA Champions League for free?

Paramount+ is the best place to stream the UEFA Champions League for fans in the United States. Paramount+ has English-language live streams for all four matches this week, and the entire Round of 16, which carries on into March. Paramount+ comes with a 1-week FREE trial.

Champions League matches on CBSSN can also be live streamed on fuboTV (1 week free) and Hulu with Live TV. Matches on Galavision and TUDN can be streamed in Spanish on fuboTV. These services are available on Amazon Fire, Apple and Android devices, Apple TV, Chromecast, Roku and more devices.

Preview from The Associated Press

The Champions League talking points ahead of the first set of first-leg matches in the Quarterfinals on Tuesday and Wednesday:

While City could hardly be in better shape, Dortmund has been plunged back into uncertainty and self-doubt. City, the runaway Premier League leader, headed into April still on track for an unprecedented “quadruple” of major trophies this season and has won 26 of its last 27 games in all competitions. The Champions League will be the toughest title to claim and there will be much focus on the approach Pep Guardiola takes for the game, with the Spanish coach often accused of overthinking his tactics on the big occasions. Dortmund’s hopes of qualifying for next season’s Champions League were dealt a major blow by the 2-1 loss to Eintracht Frankfurt on Saturday, which left Edin Terzić’s team seven points behind fourth-place Frankfurt with seven rounds of the Bundesliga to go. Speculation over star striker Erling Haaland’s future has added to the concerns, with City among the many clubs reportedly interested in the Norway international. Dortmund failing to qualify for Europe’s premier competition would add to the likelihood of Haaland’s departure. He is the Champions League’s top scorer this season with 10 goals.

It is a meeting between two of the aristocrats of European soccer — they have won the competition 19 times between them — and they come into the quarterfinals in good form. Madrid, a 13-time champion, is unbeaten in all competitions since Jan. 30 and is back in the title race in the Spanish league, not least because of the brilliant form of striker Karim Benzema. The Frenchman has scored nine goals in his last seven games, including against Atalanta in the Champions League’s last 16. Liverpool’s improvement has been more recent — and chiefly due to the return of Fabinho to central midfield after a spell filling in at center back as well as Diogo Jota after injury. The soon-to-be-deposed English champions have kept clean sheets in their last three games but there are still concerns about their defense, especially at center back where understudies Ozan Kabak and Nat Phillips are holding the fort. Real Madrid will remain without the injured Sergio Ramos, but there’s a chance Eden Hazard may return to the squad after another injury layoff.

With a ninth consecutive Bundesliga title almost certain, Bayern Munich can turn its full attention to defending its Champions League crown. Bayern opened a seven-point gap in the Bundesliga with a win over closest rival Leipzig on Saturday and promptly set its sights on Wednesday’s visit from PSG. Parisian Kingsley Coman scored the only goal as Bayern beat the French team in last year’s final, and he may have to do it again with top striker Robert Lewandowski out with a knee injury. Leon Goretzka stepped up with the winner against Leipzig, with Thomas Müller and Joshua Kimmich both involved. All three have been outstanding this season and will be tasked with making up for Lewandowski’s absence. PSG will be without its two best midfielders. Marco Verratti has contracted the coronavirus for the third time and the tough-tackling Leandro Paredes is suspended for the first leg. Danilo Pereira and Idrissa Gueye could find themselves under a lot of pressure to stop Bayern from dictating the game, so PSG’s wide players will probably have to drop back and help out.

Porto is the most surprising team in the last eight after eliminating Cristiano Ronaldo and Juventus in the round of 16. The Portuguese club is trying to make it to the semifinals for the first time since winning the European trophy in 2004. It also was a quarterfinalist in 2019, being eliminated against eventual champion Liverpool. Chelsea has drastically improved since Thomas Tuchel replaced Frank Lampard as manager in January. It was unbeaten in 14 games under the German — including back-to-back wins over Atletico Madrid in the Champions League’s last 16 — until a stunning 5-2 loss to lowly West Bromwich Albion in the Premier League on Saturday. Chelsea had previously conceded only two goals in Tuchel’s tenure. Defensive midfielder N’Golo Kante is set to miss the game after sustaining a knee injury during the international break.

Paramount+ is a streaming service available for $5.99 a month (you can cancel any time, so if you wanted to sign up Monday and then cancel on Wednesday, you’d only be charged for one month). Paramount+ gives you access to a huge library of shows on demand like “NCIS,” original series like “Star Trek: Picard” and “The Twilight Zone,” and live streaming of events, news and sports like The Grammys, your local CBS News station, live NFL broadcasts and more.

Cable and satellite packages like Spectrum, Verizon and DirecTV don’t give you access to everything Paramount+ has to offer, even if they do include other CBS/Viacom stations, so if you want to watch Paramount+ exclusives, you’re going to have to pay the $5.99 subscription fee. Unlike other streaming services, Paramount+ also gives you full access to live broadcasts of its regular TV programming across CBSN, CBS Sports HQ and ET Live.

How much does Paramount+ cost?

The basic subscription is for $5.99 per month, and includes limited commercial breaks. You can also subscribe for $9.99 per month for commercial free viewing (although live streams of TV stations will still have commercials).

Note to readers: if you purchase something through one of our affiliate links we may earn a commission.

Ant, which owns online payments platform Alipay, was criticized by regulators for its behavior toward competitors and...
Read more
Economy

US economy will be ‘enormously strong’ at end of 2021: Art Laffer – Fox Business

The stock market could double by 2030 because COVID has ‘utterly changed’ the policy environment: analyst – MarketWatch

MARKETWATCH FRONT PAGE A prominent stock-market analyst throws in the towel as the S&P 500 index nears his end-of-decade target with “eight-and-a-half years to...
Read more

India's economy may shrink in the current quarter as Covid-19 cases surge, but the country could recover in the next one, according to two...
Read more
Cryptocurrencies

Betting beyond bitcoin: Other cryptocurrencies are even hotter – WRAL Tech Wire

The dramatic rise in bitcoin may seem overly speculative. Yet bitcoin has actually lagged the surges for some other cryptocurrencies. While bitcoin has soared 15%...
Read more

In this discombobulated time, period western “News of the World” (December 25, Universal) is just the sort of big-screen entertainment in short supply for...
Read more
USA

According to trade and development body UNCTAD, the global economy posted its sharpest annual drop in output since records began to be aggregated in...
Read more

“Small businesses are the backbone of our global economy and the beating heart of innovation and opportunity in communities around the world. We’re launching...
Read more