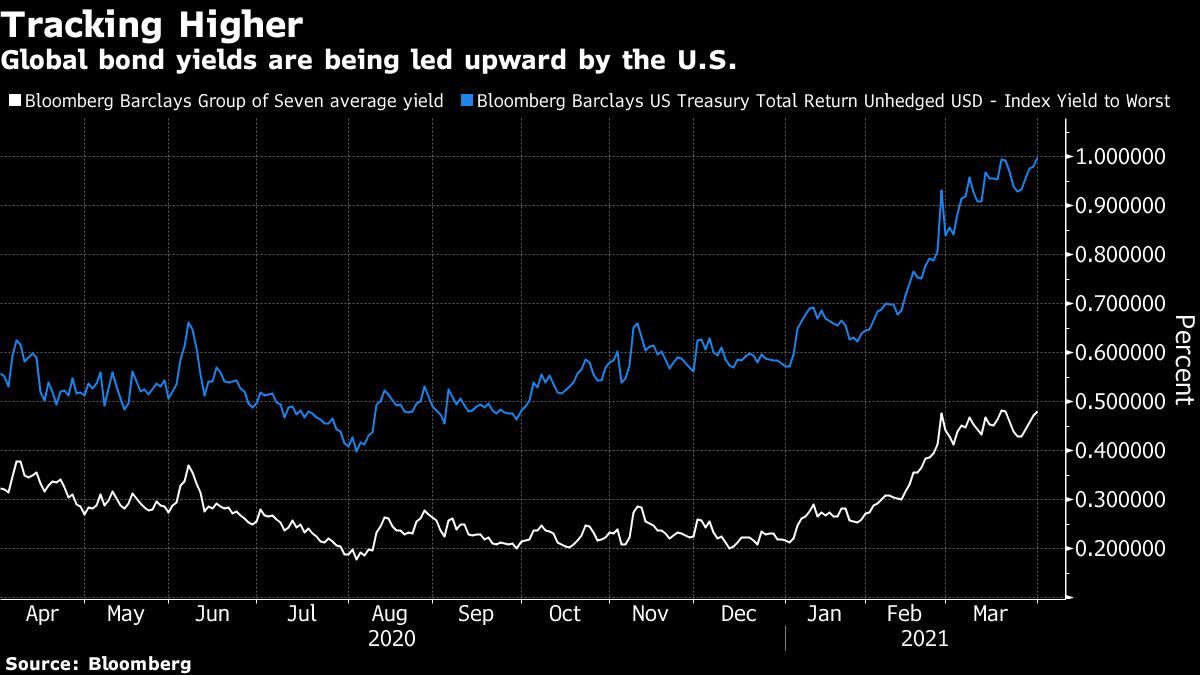 (Bloomberg) — The U.S. bond tantrum is sending a chill through indebted countries which have for years paid less to borrow more.

As the American economy powers ahead, government bond yields from Australia to Italy are taking the cue and following those of the U.S. upwards. Those higher costs threaten to undermine a flagging recovery in Europe, which is losing control of the pandemic and extending curbs. They’re also unwelcome for emerging markets reliant on dollar funding.

“This is something investors are watching,” said Thomas Wacker, head of credit at UBS Global Wealth Management. “Any increase in interest rate costs reduces countries’ fiscal headroom and adds to future deficits when it could have been spent on investments and reforms. Debt sustainability is a valid concern.”

Yields on Group of Seven government debt have more than doubled since the start of the year after climbing 27 basis points to 0.48%, according to Bloomberg Barclays index data, as Treasury yields set a blistering pace. U.S. 10-year yields traded at 1.72% as of 7:17 a.m. in New York, near a 14-month high set at the end of March.

While it’s hard to pin down how much of that is down to what’s happening in the Treasury market, analysts at ING Groep NV point to the U.S. as the driver, going as far as to assert that no reflation trade would be happening in Europe in a world in which it was isolated from the U.S.

Regardless of whether they can blame run-it-hot American economic policy, the rising price of government debt has become a headache for policymakers and investors alike.

In an interview with Bloomberg Television, European Central Bank President Christine Lagarde last week said that policy makers won’t shy away from using all their powers to stop bond yields moving higher. The ECB has accelerated bond buying to push back against rising borrowing costs.

The math goes something like this: Every 10 basis-point move across Europe’s debt structure would translate into about 11 billion euros ($12.9 billion) of annual interest. That’s based on a back-of-the-envelope calculation of the region’s debt at 11 trillion euros, according to European Commission data, and the average rate of interest at 1.6%, or 181.42 billion euros over a four-quarter rolling period.

For now, funding conditions in the euro region are still low compared with costs of existing debt. Italian 10-year bonds sold with a coupon of 4.75% almost a decade ago are likely to be refinanced at a much lower rate given their current yield of 0.631%.

Across the Atlantic, there’s even less cause for worry, this year anyway. Interest payments on the national debt fell last year and are on track to continue sliding — even after all the pandemic spending and amid the highest 10-year borrowing costs in a year.

But a period of belt-tightening down the line could harm the economic recovery and eventually require more stimulus from central banks, according to Mark Nash, a money manager at Jupiter Investment Management.

“The market will have to look for austerity in the future,” Nash said. “There is just too much debt. The recovery is masking this so far, but fragilities are growing for markets.”

Nash says the “canary in the coal mine” is the developing world, already feeling the impact of rising costs to borrow in U.S. dollars. A benchmark gauge of emerging-market stocks has trimmed gains to just 3.4% for the year amid concern poorer nations will lag efforts to deliver vaccines to their population and stimulus to their economies.

Emerging-market nations owe more than $4 trillion in dollar debt, according to estimates from the Bank for International Settlements. The burden gets bigger as U.S. yields rise, with the potential that their debt troubles spill over into other markets, according to Nash.

Cash Is King for Emerging Markets Facing Off With Yield Surge

While the causes are different from the taper talk that wreaked havoc on markets in 2013, there may be parallels with the chaos sparked by then Federal Reserve chief Ben Bernanke suggesting monetary stimulus would be pared at some point in the future.

This time bond markets have become unruly because the U.S. has unleashed trillions of dollars in fiscal stimulus, according to Steve Major, the head of fixed-income research at HSBC Holdings Plc.

“For all the talk of another taper tantrum, we may have already had something similar but this time it was brought on by the government’s aggressive fiscal loosening. Shall we call it a ‘fiscal tantrum’?” Major said. “Whatever the reason, the economy is not going to be helped by higher yields.”

The data schedule for the coming week is thinEuro area Sentix investor confidence for April on Tuesday is the only forward-looking number; German factory orders for February are published Thursday, followed by industrial production for the same month FridayThe U.K.’s data calendar is also light, leaving investors to focus on March construction PMI numbers from Markit/CIPS on ThursdayThere are no central bank speeches scheduled but the ECB publishes its March policy meeting account on ThursdayThere are no notable sovereign rating reviews

All the while, the true believers and veterans of the 12-year-old digital currency industry insist that the underlying tech is real and transformative and...
Read more
Business

Though billionaire investor Mark Cuban has warned people to be cautious with cryptocurrency, he recently said digital assets — from digital goods to cryptocurrencies...
Read more
Sports

Of the fandoms smothered by the coronavirus pandemic in 2020, sports suffered at least as much as the movies, if not more. Since sports...
Read more
Economy

In 1788, George Washington predicted that America would be “the most favorable country of any in the world for persons of industry and frugality,”...
Read more

Due to a small cluster of recent COVID-19 cases that led to quarantining athletes on five varsity teams, Northeastern has canceled games and practices...
Read more
Economy

The US economy added 916,000 jobs in March and the unemployment rate edged down to 6 per cent in a sign that the recovery...
Read more

The stock market could double by 2030 because COVID has ‘utterly changed’ the policy environment: analyst – MarketWatch

LONDON — A dozen of the world’s richest and most storied soccer clubs on Sunday announced that they had formed a breakaway European club...
Read more
Cryptocurrencies

What is Cryptocurrency Bill 2021; how it will impact bitcoin investors – Business Today