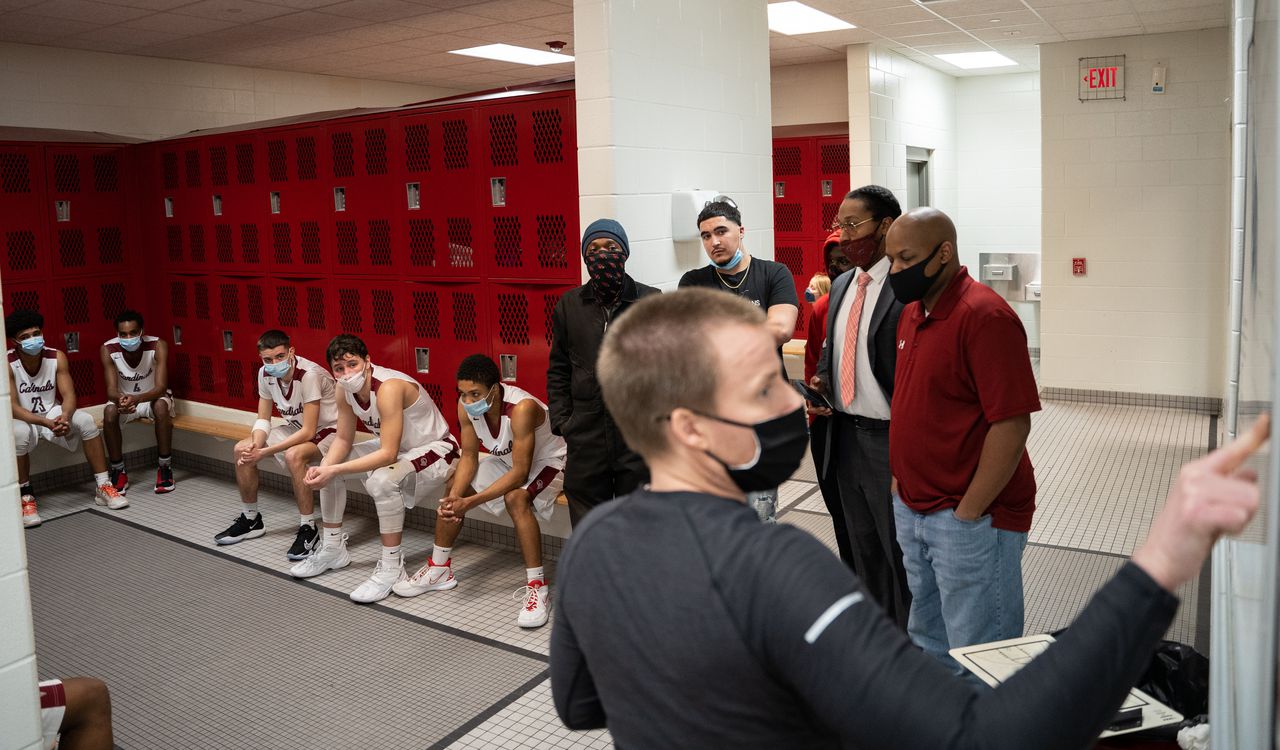 When mandated weekly testing revealed a couple of COVID-19 cases on the Muskegon Orchard View wrestling team, the school district used extra caution to test the boys basketball team, whose members had some close contacts with the positive cases.

While weekly testing wasn’t required for the basketball players because they competed while wearing masks, the district tested them anyway. It revealed a half dozen positive COVID cases that abruptly ended a historic season that saw the Cardinals capture their first conference title since 1981.

It was a “really difficult pill to swallow,” Superintendent Jim Nielsen said, but in line with the district’s proactive approach to ensure the safety of student-athletes during the pandemic.

“We see athletics as a very integral part of a lot of students’ school experience, starting in middle school and moving on through high school,” Nielsen said. “We’ve wanted to do athletics right from day one, but part of doing it right is making sure we’re doing it safely.”

COVID-19 cases have surged in Michigan – particularly among young people – leaving schools across the state to make unpopular decisions like reverting back to virtual learning or putting sports seasons on pause. The state is now only behind New York in the seven-day average of new cases in the U.S., and has the nation’s fastest-growing increase, data shows.

In the past three weeks, Michigan residents younger than 20 have accounted for 22% of new cases compared to 13% during the first year of the pandemic. Daily average cases since March 5 are up 131% for children younger than 10 and 147% for ages 10-19 compared to the average for the previous year, state data shows.

Outbreaks in K-12 schools also are on the rise, with new and ongoing school-related cases increasing by 22% in the past week alone, according to school outbreak data from the state. The uptick in cases has impacted sports, as well, with more than 100 boys and girls basketball teams withdrawing from the state tournament since mid-March.

Along with cutting short the boys basketball and wrestling seasons, Orchard View’s student-athlete outbreaks also forced the district to switch its high school to remote learning. With many students returning from spring break next week, that switch remains a necessity, Nielsen said.

“I think high school kids tend to get together more often than maybe some of the other younger students,” Nielsen said. “I think that probably, in part, (led) to the spread in our district.”

Nielsen’s observations align with many other schools across the state that are seeing outbreaks, particularly in high schools. And the Michigan Department of Health and Human Services (MDHHS) has attributed more recent outbreaks to extracurricular activities, rather than classroom exposure.

MDHHS Spokeswoman Lynn Sutfin said the department is seeing increases in cases involving student-athletes, as opposed to transmission in the classroom. Throughout the month of March, 512 COVID-19 cases were identified among organized local or school sports teams, Sutfin said, a “marked increase” from January and February where 344 cases were identified.

“It’s highly possible this transmission is happening on the sidelines or during events after the games or practices such as team dinners or athletes hanging out together without masks,” Sutfin said. “The presence of more infectious variants, such as the B 1.1.7 variant, threatens the state’s progress in controlling the pandemic and MDHHS continues to monitor the data closely.”

As Ann Arbor Public Schools prepared to welcome students back to the classroom last week for the first time in more than a year, officials became aware of a “definitive uptick” in COVID-19 cases among sports teams, Superintendent Jeanice Swift said, even though high school students were still in remote learning.

AAPS opted to pause spring sports as the rise in teen cases is a “concern for all of us,” Swift said.

“It mirrors what we’re seeing in other districts and in other school communities,” Swift said. “We know from contact tracing that this seems to be a pattern resulting from social events.”

“If you know that kids had a sleepover or a party, that might be the most reasonable explanation because nobody’s watching them and people aren’t masked,” Kraut said. “The truth is a lot of kids who play on a team together are friends socially. Some households have been extremely careful about social activities and others less so.”

While it’s unfortunate parties, sleepovers and social gatherings may have contributed to some teams withdrawing from boys and girls basketball tournaments this year, Michigan High School Athletic Association Spokesman Geoff Kimmerly argues a majority of teams – 92.5% – have still been able to compete.

MHSAA doesn’t have plans to pause the spring sports season, despite Michigan’s uptick in COVID cases because the sports are safer because they don’t involve as much contact and are able to be played outdoors, Kimmerly said.

“Obviously, the social element is an enjoyable and popular part of a typical season – but our schools and students and families know and must continue to follow precautions that limit that kind of activity right now if they want to guarantee their best chance of continuing to play without quarantines,” Kimmerly said.

“It’s important to remember that states all over the country are playing school sports right now – and they are not showing the same statewide COVID metrics as Michigan and a few others in bad spots.”

More than a year into the pandemic, Geoff Bontrager doesn’t know what to think of the latest reports saying Jackson as one of the nation’s COVID-19 hotspots.

“Let’s wait a couple of weeks and I’m sure it will be someplace else,” said Bontrager, Northwest Community Schools superintendent. “Although our rates are higher, we have more knowledge of COVID and how it spreads than we did a year ago.”

Despite some challenges, including an outbreak of Northwest High School student cases in early March, the district is navigating the COVID-19 pandemic more effectively now, Bontrager said.

Northwest had around 10 staff members who recently tested positive for the virus, Bontrager said. All of them hadn’t been vaccinated, he said, noting that none of the fully vaccinated staff have tested positive or have needed to quarantine.

Overall, Bontrager said cases haven’t been noticeably higher among his district’s sports teams, which he believes in some cases “have been even more careful” in following health and safety protocols. Other area schools, however, have had to move back to remote learning or end sports seasons.

At Northwest, the only team ending its season prematurely was the girls basketball team, which forfeited its regional semifinal this week due to a lack of active players available after several spring break opt-outs.

Northwest students return from spring break on April 5, and that presents the next challenge, said Bontrager, noting Northwest sent out its usual recommendations of social distancing, masking and washing hands prior to students’ week off.

Ultimately, he said, there is only so much you can control.

“Unless it’s some order from the state, you are treading on thin ice forbidding or trying to regulate people’s travel,” Bontrager said. “We take more of the philosophy of, ‘Live life, but proactively be as safe as you can.’”

AAPS is following Centers for Disease Control and Prevention guidance and recommendations encouraging families – even those who have been vaccinated – to delay travel and stay home during spring break, Swift said.

AAPS will begin testing around 1,500 student-athletes upon their return from spring break on April 5, providing a “baseline” of where the district is at in terms of spread. That is a “tremendously helpful tool” it didn’t have last fall, Swift said.

“We’re very near the end of this, but we’re not at the end of it,” Swift said. “So it’s even more critical to follow those (mitigation) steps.”

To help you navigate this complicated school year, we’re pleased to offer you a simpler way to get all of your education news: Our new Michigan Schools: Education in the COVID Era newsletter delivered right to your inbox. To receive this newsletter, simply click here to sign up.

Every NFL team who could be in need of a new quarterback has their eyes on the situation in Houston this...
Read more
USA

As the coronavirus pandemic has changed the world around us, organisations have had to adapt to a new, remote way of working, and in...
Read more

‘Explosion of economic activity’ may put inflation fears in check. Here’s why – CNBC

SAN FRANCISCO — One by one, they left. Some quit. Others were fired. All were Black.The 15 people worked at Coinbase, the most valuable...
Read more

Getty Images It was another busy weekend of European soccer action with plenty of movement at both ends of league tables...
Read more
Economy

The Clash of Liberal Wonks That Could Shape the Economy, Explained – The New York Times

The problem, he says, is that the plan’s total size reaches a scale that risks major future problems. In particular, the total money being...
Read more
Cryptocurrencies

With bitcoin near all-time high, this is where Visa’s CEO sees crypto going – CNBC

Every day, in every corner of the Earth, people have a choice of how to spend, whether it is cash, checks, or using Visa,...
Read more

Coronavirus: What’s happening in Canada and around the world Saturday – CBC.ca

The latest:Roughly 5,000 workers at an Amazon warehouse near Toronto are staying home for at least two weeks because of an ongoing outbreak of COVID-19...
Read more
USA

Resurgent economies, led by the U.S., and a burst of demand for consumer goods are heaping pressure on already strained supply chains, with a...
Read more