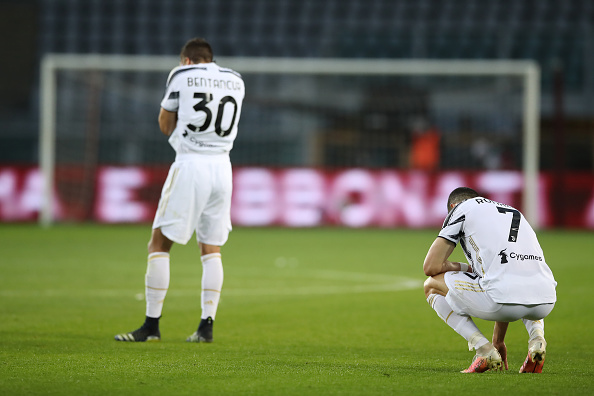 Club football has returned with a bang this weekend following the latest international break. But, with the season edging towards its business end, several of Europe’s established order find themselves in danger of missing out on European qualification for the Champions League spots.

Recent years in the Premier League have seen some of English football’s juggernauts miss out on a place in the top four as the so-called ‘big six’ has taken form. However, this season has seen similar patterns occur among other clubs across Europe’s top five leagues, as certain clubs usually assured of a place in the Champions League face a race to the finish line.

European Qualification Not Certain for Some of Europe’s Heavyweights

In Italy, defending champions Juventus are looking likely to surrender their crown to one of the Milan clubs. Having drawn away to strugglers Torino on Saturday, Andrea Pirlo‘s side now sit nine points behind Antonio Conte‘s Inter Milan, having played a game more.

Much like Celtic in the Scottish Premiership, Juventus have found winning a tenth consecutive league title to be one hurdle too far. While the Scudetto looks out of reach, The Old Lady may find themselves slipping out of the top four if their inconsistent form continues until the end of the season.

The defending champions are only ahead of fifth-placed Napoli on goal difference, and were once again indebted to the evergreen Cristiano Ronaldo at the weekend – the Portuguese forward netting his 30th goal of the season to secure a point.

While club bosses have acknowledged that Pirlo’s first season as manager would never pass without its fair share of setbacks, they might find themselves with an uncomfortable decision to make if Juve were to fail to reach next season’s Champions League. The Italian giants were eliminated from this year’s edition by Porto in one of the upsets of the tournament.

One club in desperate need of Champions League football next season is Borussia Dortmund. However, it is looking increasingly likely that Edin Terzic will fail to guide the club to a top-four finish between now and the end of the Bundesliga season.

Indeed, it has been a tumultuous season for Dortmund so far. The club’s young stars were supposed to lead the charge at the Signal Iduna Park under the guidance of experienced manager Lucien Favre. However, this failed to materialise, and Favre was sacked midway through the campaign.

Interim manager Terzic has failed to oversee an upturn in form, and Dortmund currently find themselves seven points adrift of fourth-placed Eintracht Frankfurt.

And this despite the goalscoring form of Erling Braut Haaland, whose 21 goals in 22 league appearances have not been enough to pull his side up alongside the teams currently occupying the top four European qualification places.

Premier League – Teams at Risk of Missing Out on European Qualification

And what of the Premier League? Liverpool may only be two points off the Champions League spots but its a far cry from where the Reds expected to be this season.

The Blues’ defeat will have been equally well-received by Tottenham Hotspur boss Jose Mourinho, who will be plotting a way into the Champions League positions knowing that his side has a superior goal difference to those of their London rivals.

Also in the mix are Carlo Ancelotti‘s Everton, who have not lost hope of making a last-ditch leap into Europe’s elite competition.

With so much still to play for across Europe, the Champions League will certainly be missing some of its most familiar names and faces next season.

NASHVILLE, Tenn. — Peter Gibson said he woke up to news Christmas morning that a massive explosion had ripped through downtown Nashville and quickly...
Read more
Economy

The writer is a finance professor at Peking University and a senior fellow at the Carnegie-Tsinghua CenterWill China double the size of its economy...
Read more

Here’s what you need to know:The I.M.F. forecast for global economic growth has climbed to 6 percent for the year.Credit...Andrew Harnik/Associated PressThe global economy...
Read more

5 Cryptocurrencies To Buy Other Than Dogecoin Or Bitcoin – Yahoo Finance

TipRanks3 Monster Growth Stocks to Beat the VolatilityVolatility is back on the menu. Last week brought January’s trading to a close in what amounted...
Read more
Cryptocurrencies

Ethereum’s ether cryptocurrency came within a hair’s breadth of a new record high on Tuesday, amid expectations that the recent GameStop trading saga would...
Read more
World News

Fans in the USA and Canada will be able to get their Sky Super Rugby Aotearoa fix from this weekend with news that all...
Read more
Sports

In a recent development, the Securities and Exchange Commission of Pakistan (SECP) has published a position paper on the regulation of virtual asset...
Read more