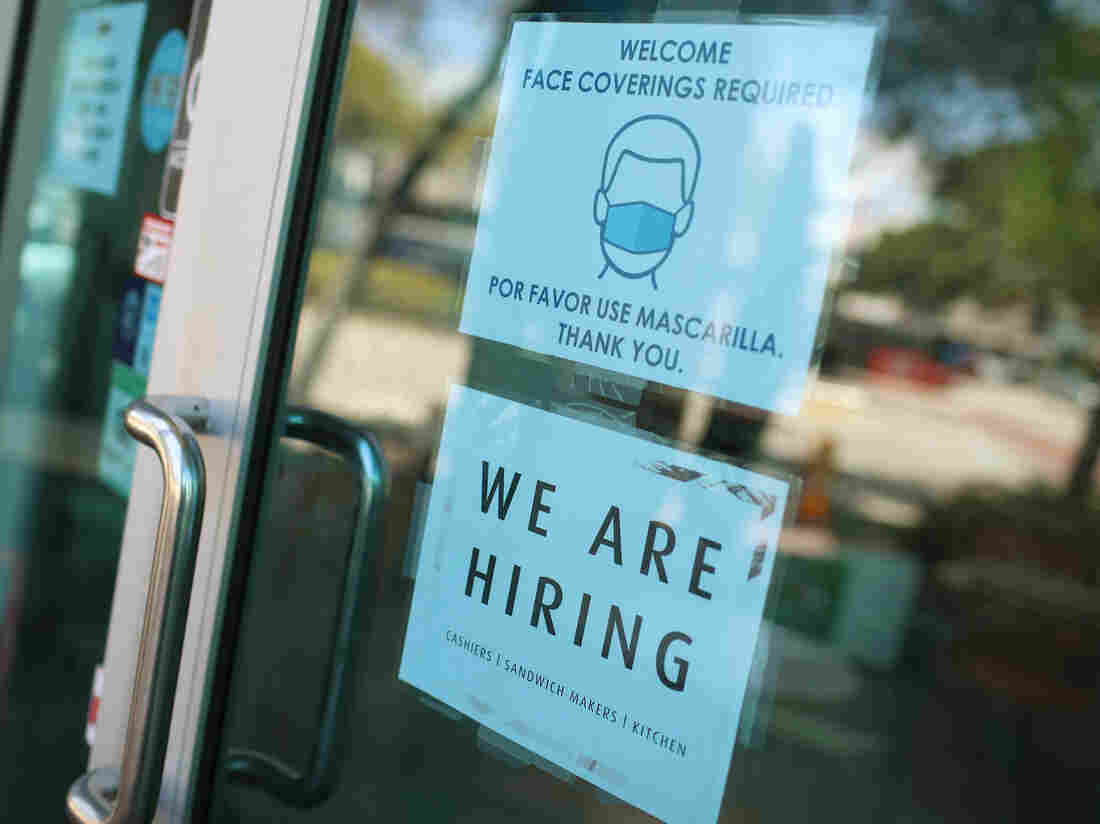 A store in Miami displays a “We are hiring” sign on March 5. U.S. employers added 916,000 jobs in March, the biggest number since August, amid an improving pandemic outlook and trillions of dollars in stimulus passed by Congress. Joe Raedle/Getty Images hide caption 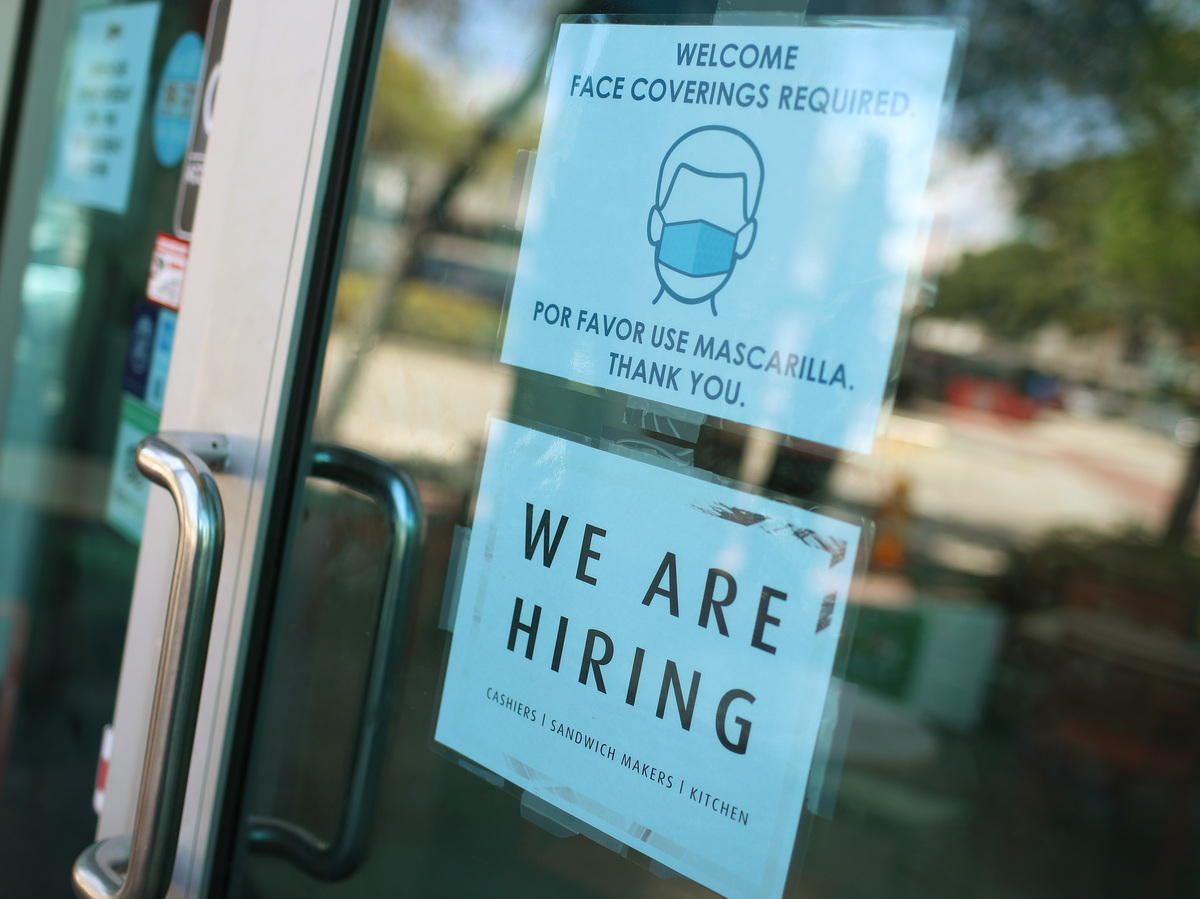 A store in Miami displays a “We are hiring” sign on March 5. U.S. employers added 916,000 jobs in March, the biggest number since August, amid an improving pandemic outlook and trillions of dollars in stimulus passed by Congress.

Hiring accelerated last month as U.S. employers added 916,000 workers to their payrolls. It was the largest job gain since August, fueled in part by an improving public health outlook and a new round of $1,400 relief payments.

President Biden cheered the encouraging jobs report during remarks to reporters at the White House.

Job growth has improved in each of the last three months after a winter surge of coronavirus infections brought hiring to a standstill in December.

“The labor market recovery has awakened from its winter slump,” said Nela Richardson, chief economist at the payroll processor ADP.

Job gains for January and February were also revised upward.

Over the past year, bars and restaurants have been particularly sensitive to the ups and downs of the pandemic. Those businesses added 176,000 workers in March.

“The weather is getting better. People want to get out. They’re enjoying themselves more than they did before,” said Ray Sandza, vice president of data and analytics for Homebase, which provides payroll software to restaurants and other small businesses. “Businesses can see the corner rounding, so they’re willing to bring more people on.”

Construction companies added 110,000 workers in March after a slowdown in February when winter storms blanketed much of the country. Schools and colleges added 190,000 workers as in-person education gradually resumed.

As more schools reopened, some women who had been forced to stay home with children were able to return to work. The labor force participation rate for adult women rose by four-tenths of a percentage point, more than offsetting a slight drop in the participation rate among men.

Forecasters expect the job gains to continue, provided a recent uptick in coronavirus cases doesn’t erupt into a full-blown wave.

Coronavirus vaccinations have ramped up rapidly with an average of 2.9 million shots given daily over the past week. But new infections are also climbing again after falling sharply in February and early March.

“It’s almost like a race to try to get the maximum number of people vaccinated before the virus has a chance to mutate into something that we can’t handle,” said Raphael Bostic, president of the Federal Reserve Bank of Atlanta.

Despite the solid job gains in March, the U.S. is a long way from full employment. There are still 8.4 million fewer payroll jobs in the U.S. now than there were before the coronavirus took hold a year ago.

“Even at a million [additional] jobs a month — which would be an incredible number — we’re still looking at least into 2022 before we get to pre-pandemic levels,” added Bostic, who was speaking during a presentation to the World Affairs Council of Atlanta on Tuesday. “We’ve still got a ways to go on the employment front before I think we’ll be in a position to really exhale and let the marketplace play out as it will.”

This week, Biden proposed an additional $2 trillion in federal spending on infrastructure and other measures, which he described as an investment in the nation’s long-term growth. The president plans to meet with lawmakers from both parties to discuss that plan when Congress returns from its Easter recess.

“Debate is welcome,” Biden said. “Compromise is inevitable. Changes is my plan are certain. But inaction is not an option.”

The president stressed that progress on both the public health and economic fronts could be reversed.

New claims for unemployment unexpectedly rose last week with 719,000 people applying for state benefits and another 237,000 seeking help under a federal program for gig workers and the self-employed.

Manufacturing has recovered more quickly from the pandemic than businesses that rely on in-person services. Factories added 53,000 workers last month.

A survey of factory managers in March found some of the strongest business conditions in decades, putting a strain on parts suppliers and delivery networks.

“That’s simply because demand is so great,” said Tim Fiore, who compiles the survey for the Institute for Supply Management. “They’re great headaches to have.”

Factories report rising prices for steel, plastic and other raw materials, which ultimately may be passed on to consumers.

“If demand is not relaxing, people are going to have to pay whatever it costs,” Fiore said.

The Federal Reserve expects overall consumer prices to climb by 2.4% this year but says that jump in inflation is likely to be temporary.

In a pre-print study with The Lancet, the research team - from Oxford, Nanoro in Burkina Faso and the US - reported the trial...
Read more
Sports

With the NCAA’s authority quickly eroding, significant change is ahead for major college sports – CBS Sports

Getty Images The NCAA will publish the latest edition of its manual on Aug. 1. The 464-page tome is the foundational...
Read more
Stock

After winning with ‘disruptive’ stocks, this five-star manager has a few more ideas to share – MarketWatch

The world is about to step out of a dark hole and into the bright sunshine, so investors should drop the anxiety already. That...
Read more
Economy

They call economics the dismal science, and Diane Swonk normally exemplifies her profession's penchant for gloominess. "People say, 'You're always talking about the downside,'"...
Read more

Famous landmarks in cities such as Paris, Moscow, Athens, Rome, Berlin and Rio de Janeiro have turned off their lights to raise awareness of...
Read more
Sports

Silverstone's Stuart Pringle: "If F1 should decide that Silverstone is the right venue for a sprint race then we would be totally...
Read more
World News

The recent rallies and volatility in the stocks of video game retailer GameStop and movie theater chain AMC can be linked to a term...
Read more
Cryptocurrencies

It wasn't even a month ago that PayPal announced that it would let its customers use cryptocurrencies and hold them in their wallets, but...
Read more