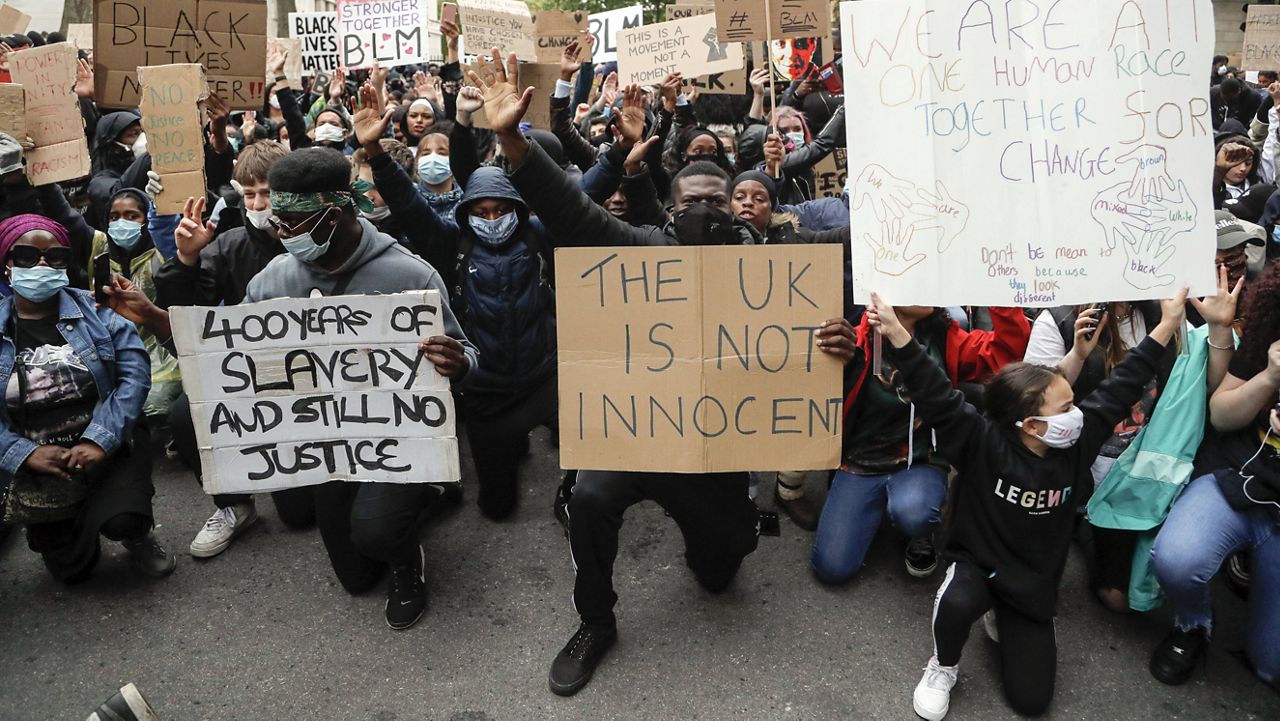 A report commissioned by the British government has been met with swift and resounding backlash after it concluded there is “no institutional racism” in the country.

The 258-page report was requested by Prime Minister Boris Johnson in response to Black Lives Matter protests in the U.K. last year. It said that Britain “should be regarded as a model for other white-majority countries” when it comes to the strides it has made over the last half-century.

“Put simply we no longer see a Britain where the system is deliberately rigged against ethnic minorities,” it says.

The analysis was conducted by the Commission on Race and Ethnic Disparities. Nine of the 10 experts who worked on the report are from ethnic minority backgrounds, although critics charge they were selected because their views align with the agenda of Johnson and the Conservative government.

Samuel Kasumu, Johnson’s senior most Black adviser, has resigned, the government said Thursday, one day after the release of the document.

The government denied any link between Kasumu’s departure and the report. The prime minister’s office said Kasumu would leave his job as a special adviser for civil society and communities in May, as had “been his plan for several months.

But Simon Woolley, a former government equalities adviser and a member of the U.K. House of Lords, said Kasumu’s exit was connected to the “grubby” and “divisive” report.

“(There is a) crisis at No. 10 when it comes to acknowledging and dealing with persistent race inequality,” Woolley said.

Citing strides to close gaps between ethnic groups in educational and economic achievement, the analysis said race was becoming “less important” as a factor in creating disparities that also are fueled by class and family backgrounds.

“The impediments and disparities do exist, they are varied, and ironically very few of them are directly to do with racism,” the report says. “Too often ‘racism’ is the catch-all explanation, and can be simply implicitly accepted rather than explicitly examined.”

Many anti-racism activists were skeptical of the findings, saying the commission ignored real barriers to equality.

“Institutionally, we are still racist, and for a government-appointed commission … to deny its existence is deeply, deeply worrying,” said Halima Begum, chief executive of the Runnymede Trust, a racial equality think tank.

Doreen Lawrence, who became a leading anti-racism campaigner after her 18-year-old son Stephen was killed in a racist 1993 attack in London, said the report’s authors were “not in touch with reality.”

“Those people who marched for Black Lives Matter? It’s denying all of that. The George Floyd stuff? It’s denied all of that,” she said.

The report was also widely disparaged by academics and scientists, who said it ignored the interplay of factors such as poverty, class and race in creating inequality.

The coronavirus pandemic has highlighted racial fault lines, with Britons from Black African and Black Caribbean backgrounds dying from COVID-19 at more than twice the rate as their white compatriots. Jobs, underlying health conditions and deprivation are all factors in the divide.

“Its attempts to undermine the well-established and evidence-based role of ethnicity on health outcomes will lead to a worsening of systemic inequalities, putting more ethnic minority lives at risk,” the authors said.

Black people in Britain are also three times as likely as white people to be arrested and twice as likely to die in police custody.

Like other countries, Britain has faced an uncomfortable reckoning with race since the death of George Floyd, a Black American, at the knee of a U.S. policeman in May 2020 sparked anti-racism protests around the world.

Large crowds at Black Lives Matter protests across the U.K. last summer called on the government and institutions to face up to the legacy of the British Empire and the country’s extensive profits from the slave trade.

The toppling of a statue of 17th-century slave trader Edward Colston in the city of Bristol in June prompted a pointed debate about how to deal with Britain’s past. Many felt such statues extol racism and are an affront to Black Britons. Others, including the prime minister, argued that removing them was erasing a piece of history.

Johnson insisted Thursday that his government was not downplaying racism. He pointed out that the commission made 24 recommendations, including setting up an office for health disparities, sending low-level drug offenders into the public health system rather than the criminal justice system, and ensuring police forces better represent the communities they serve.

“There are very serious issues that our society faces to do with racism that we need to address,” he said. “We’ve got to do more to fix it, we need to understand the severity of the problem, and we’re going to be looking at all the ideas that (the commission) have put forward, and we’ll be making our response.”

The Associated Press contributed to this report.

WASHINGTON – Charges against police officers, public safety workers and military veterans in the Jan. 6 insurrection at the Capitol have reignited concerns among...
Read more
Stock

When Tesla tumbles, it drags down many stock-market dreams – Moneyweb.co.za

Tesla Inc.’s plunge has cost its shareholders about $300 billion in 2021 but the toll it is taking on speculative sentiment throughout the market...
Read more
Cryptocurrencies

The U.S. Government Is Targeting Cryptocurrency to Expand the Reach of Its Financial Surveillance – EFF

One of the most important aspects of cryptocurrencies from a civil liberties perspective is that they can provide privacy protections for their users. But...
Read more

Habib hasn't heard from his brother for two years, since he was taken captive by Kurdish forces. But he knows that Bekim's wife and...
Read more
Sports

India Covid: The agony of watching a catastrophe from afar – BBC News

"It's just such a surreal feeling to be sitting on the opposite side of the world, seeing a funeral unfolding on your screen, seeing...
Read more
Economy

Over the next five years Eskom is expected to have an electricity supply shortage of 4 000 megawatts (MW). However the shortfall could increase...
Read more
Economy

DoorDash began trading on the NYSE on Wednesday. Courtesy of NYSE An IPO...
Read more