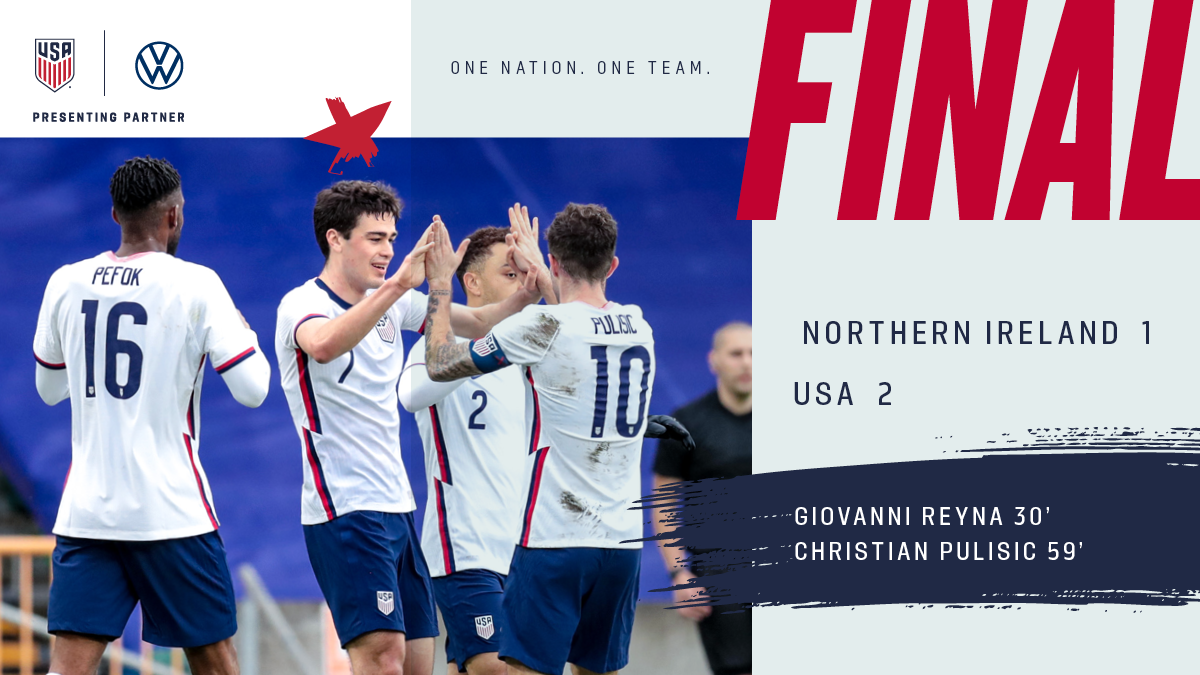 BELFAST, Northern Ireland (March 28, 2021) – A goal in the first half from Gio Reyna and a penalty kick score in the second from Christian Pulisic helped lift the U.S. Men’s National Team to a solid 2-1 victory against Northern Ireland on Sunday evening at the National Stadium at Windsor Park.

For the 18-year-old Reyna, the goal marked his second in four career senior international matches while Pulisic became the 13th MNT player to reach 15 career goals. The goal was Pulisic’s first for the USMNT since 2019.

The win – which extends the USA’s unbeaten streak to nine (8-0-1) – was the USA’s first against a European opponent on the road since June 10, 2015, when the Americans defeated defending World Cup champion Germany. It also snapped an 11-game away winless streak dating back to a victory against Cuba on Oct. 7, 2016.

Playing with three center backs and two wing backs for the first time since 2019, the U.S nearly opened the scoring within minutes when Pulisic played left wing back Antonee Robinson into the penalty box. Robinson whipped in a cross that skidded across the goalmouth just out of the reach of two U.S. attacking players.

In a match that was at times physical, Northern Ireland caused the USA a few nervy moments on set pieces, but the defense was up to the task and prevented any clear attempts on frame.

The U.S. broke through after 30 minutes when Reyna took a pass from defender Tim Ream and ripped a shot from 24 yards out almost exactly in the middle of the field. The shot took a big deflection off a Northern Irish defender and plowed into the net past wrong-footed goalkeeper Conor Hazard.

After Northern Ireland forced a diving save from USA goalkeeper Zack Steffen, Reyna and newcomer Jordan Siebatcheu – making his first start for the USMNT – nearly combined for a goal. Reyna did well to bring down a long ball with his chest, setting up Siebatcheu’s first-time shot from 18. However Northern Ireland defender Daniel Ballard’s last second lunge blocked the blast.

The U.S. took greater control of the match in the second half with Pulisic in particular very active all over the field. The USA captain was rewarded near the hour mark when he was tripped in the area and converted the penalty kick for his first goal with the USMNT since October 11, 2019 against Cuba. His 15 goals now ties him with National Soccer Hall of Famer Cobi Jones for 12th all-time.

USA second half substitute Daryl Dike was unlucky not to extend the lead as the thundering forward was twice denied by Hazard with Pulisic the catalyst on each occasion. On the first chance, he played a seeing-eye through ball between lines to spring Dike, who close-range shot was kick-saved at the last moment by the Northern Irish goalkeeper. Pulisic then found Luca de la Torre in the middle, who helped off a defender, advanced forward with speed, and slipped a ball to Dike into the penalty area. His low shot at the near post again forced Hazard to again make a great save. Dike also barely missed on a flicked header that flew inches outside the right post.

Northern Ireland cut into the lead late in the match with a well-taken goal from Niall McGinn as his powerful strike from a sharp angle flew over U.S. goalkeeper Zack Steffen, but the USA did well to close out the match to win its third game of the year.

The USMNT will next take on No. 16-ranked Switzerland on May 30 in St. Gallen. The match will be shown live on the ESPN and Univision networks from kybunpark with the kickoff still time to be finalized.

That match will serve as a final tune up for three significant competitions, starting with the Concacaf Nations League Final Four where the USMNT will face Honduras in one semifinal while Mexico and Costa Rica will square off in the other. The winners compete for the inaugural Nations League title. The matches are scheduled for the FIFA window in the first week of June, with the venues and times still to be determined.

The following month, the U.S. will compete in the 2021 Concacaf Gold Cup in search of its seventh Confederation title, followed by the start of Concacaf 2022 FIFA World Cup Qualifying in September.

USA – GIO REYNA (TIM REAM), 30th minute: Having done well to keep possession up high, the U.S. broke through at the half hour mark off the right foot of Gio Reyna. Veteran defender Tim Ream settled the ball up field on the left side, and with little pressure calmly played Reyna in the center of the field. The 18-year-old lost his mark with a quick dribble to the inside to create separation and fired a shot from 24 yards out that took a deflection off defender Ciaron Brown and settled in the back of the net as goalkeeper Conor Hazard had already committed the other way. For Ream, it was his fourth career assist. NIR 0, USA 1

USA – CHRISTIAN PULISIC (PENALTY KICK), 59th minute: A quick developing play saw Reyna find Jordan Siebatcheu at the top of the box. In his first start, Siebatcheu laid off the ball to the on-rushing Pulisic, who took a touch towards center and was cut down by the foot of defender Daniel Ballard. Pulisic stepped up and hit a low shot just right of center past Hazard for his 15th career goal and first since 2019. NIR 0, USA 2

NIR– NIALL MCGINN (KYLE LAFFERTY), 88th minute: Northern Ireland spoiled the clean sheet with a blast in the dying minutes. Receiving a long ball into the box, Lafferty held off two USA defenders and slightly advanced the ball on the right to McGinn, who hit a first-time dipping volley from a tight angle over Steffen that hit the underside of the crossbar on its way into the net to cut the lead in half. NIR 1, USA 2

USA– ZACK STEFFEN, 38th minute: Northern Ireland’s Jordan Thompson’s first-time pass from midfield sprung teammate Shayne Lavery towards the U.S. end just right of center. With center back Matt Miazga in his way, Lavery was still able to get off a shot from 18 yards out across his body, forcing Steffen to quickly stretch out to his right to parry the shot away.

Do you know a high school sports team that deserves recognition?  Tell us about it. The Southwest Florida High School Sports Awards, presented by Babcock Ranch,...
Read more
Economy

The recent rallies and volatility in the stocks of video game retailer GameStop and movie theater chain AMC can be linked to a term...
Read more
USA

The Business Council of Alabama today launched a campaign against any calls for national economic lockdowns to curb the spread of COVID-19.“Keep Alabama Open”...
Read more
Business

One business reopens with help of a Fort Wayne beerhall during pandemic – wpta21.com

FORT WAYNE, Ind. (WPTA21) -- The ongoing pandemic has affected many businesses. But, one beerhall is helping another Fort Wayne business. Back in...
Read more

The Economy Is Still Vulnerable. Trade Could Be a Refuge. – The Wall Street Journal

Only a year ago, trade was a big worry for investors, and the strong domestic economy a source of comfort. How times change. The...
Read more
World News

Early in the COVID-19 pandemic, María Teresa Arzamendia began working night shifts. The 40-year-old says she had been employed by the owners of a...
Read more

These four states have been hit hard by COVID-19 yet balked at strict mask mandates. What is it like to live there? – USA...

In an already divided America, the holidays are going to look different this year.Arkansas still allows indoor dining, albeit with limited capacity and reduced...
Read more
Cryptocurrencies

It is not only India, governments across the world have started banning them. The cryptoprophets expected this, but they underestimated the power of the...
Read more
USA

Neuberg Diagnostics launches NCGM, its first Laboratory in the USA – The Mountaineer