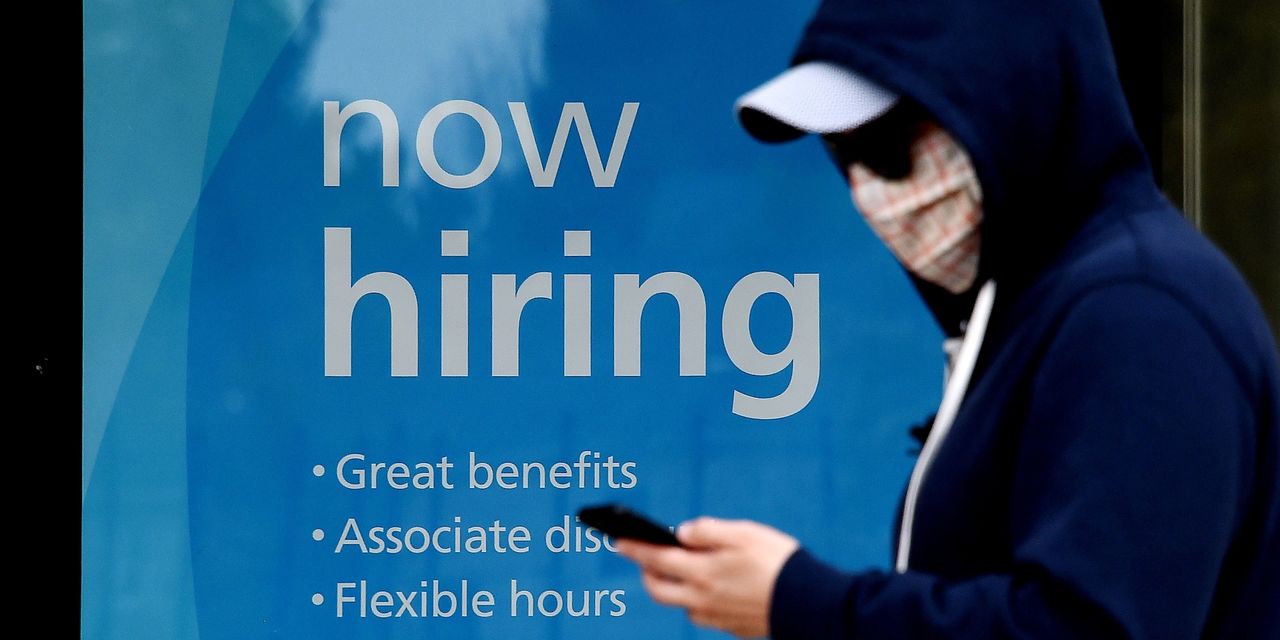 U.S. stock benchmarks rebounded sharply Friday afternoon in whipsaw trade, as the rise in bond yields steadied, after a stronger-than-expected monthly jobs update from the Labor Department that offered evidence of an economy recovering from the effects of COVID-19.

All major sectors in the S&P 500 index gained while the tech-heavy Nasdaq climbed more than 1.5% as giants Amazon.com Inc. and Apple Inc. recovered but the index still closed lower for the week.

How are stock benchmarks performing?

Markets are wrestling with good news on the economic front and what that means for bond yields after the U.S. created 379,000 new jobs in February—marking the biggest increase in four months. Economists surveyed by Dow Jones had expected 210,000 jobs to have been added. The unemployment rate slipped to 6.2% from 6.3%, although economists widely believe the real rate is much higher.

“Is good news good news, even if it means higher rates? I’m not sure the market has answered this question just yet,” he said.

The jobs data suggest that vaccination distribution and fiscal stimulus from Congress is providing a jolt to the economy and may push up inflation in the aftermath of the recession caused by the public health crisis .

“At a time when the market was already grappling with the steep rise in bond yields, the significant upside surprise to nonfarm payrolls will not be welcomed by bond investors,” wrote Seema Shah, chief strategist, at Principal Global Investors.

Friday afternoon, the yield on the 10-year Treasury note TMUBMUSD10Y, 1.567% was down about 1 basis point to 1.553%, after a sharp rise this week in the wake of comments from Federal Reserve Chairman Jerome Powell on Thursday that were seen as insufficiently concerned about the possibility of inflation as the economy recovers with help from another dose of fiscal stimulus from Washington.

However, Powell did say that the bond market selloff during the past few weeks has his attention and the central bank wouldn’t sit back and let the financial market conditions tighten broadly.

Meanwhile, the President Joe Biden’s $1.9 trillion COVID-19 financial aid plan is inching through the Senate and is expected to gain approval sometime over the weekend.

“Implications for the markets are mixed,” McMillan said. “Faster job growth means rates are likely to keep edging up, as faster growth likely means more demand for capital, and potentially more inflation. That is hitting valuations for both bonds and stocks, which should be a headwind for markets,” he added.

The market’s volatility reflects a so-called rotation out of highflying technology stocks, viewed as expensive by some measures, to other areas of the market considered undervalued, including energy and financials, amid the rise in bond yields.

Which stocks were in focus?

How did other assets fare?

In a first-of-its-kind deployment for the huge, swing-wing bombers, four US Air Force B-1 bombers and approximately 200 personnel from Dyess Air Force in...
Read more
European Premier League

Eswar PrasadJesse WinterBy redistributing power away from the government and Wall Street and to the people, cryptocurrency will democratize finance, enthusiasts of the digital...
Read more

USA TODAY is keeping track of the news surrounding COVID-19 as a pair of vaccines join the U.S. fight against a virus that has...
Read more
World News

“There is a widespread misconception that younger kids cannot get covid, cannot pass it and cannot get severely ill from it,” Eckard said. “And...
Read more
Stock

The plans would see clubs qualify for Europe based on previous performances in the competition rather than their position in the table ...
Read more
Economy