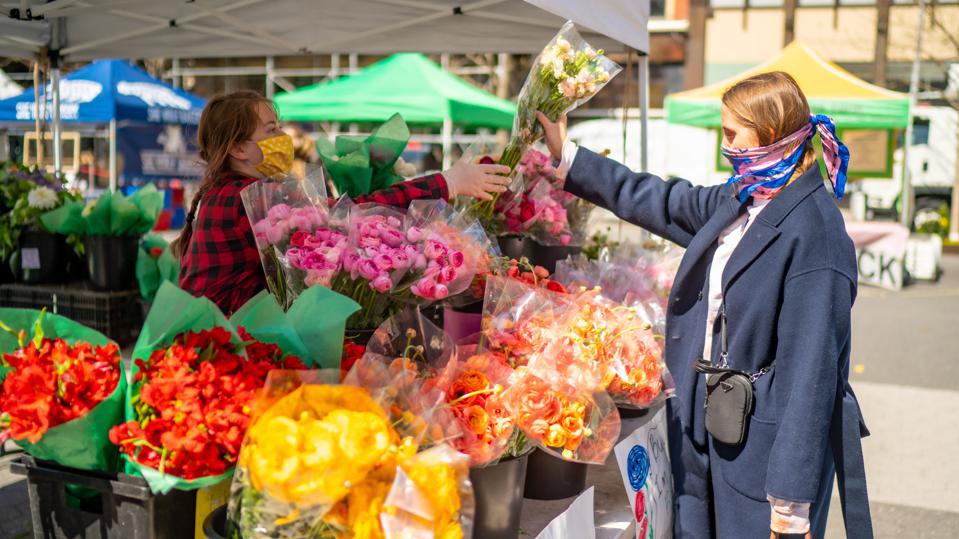 The shortest month of the year was not short on stock market surprises. February started with the S&P 500 notching a 5.4% gain in a six-day winning streak—its longest since August—only to end the month with investors dumping stocks amid a surge in bond yields.

Two dynamics help to explain the recent moves in stock and bond markets. Interest rates are rising amid optimism about the pace of U.S. economic growth, accompanied by some nervousness about higher inflation. In February, the yield on the benchmark 10-year Treasury jumped from 1.08% to 1.52%, its highest level in a year.

Rising interest rates can be interpreted as a sign of optimism. The yield increases are coming because markets have glimpsed an end to the pandemic, says Jamie Cox, managing partner and a financial advisor with Harris Financial Group in Richmond, Va. The markets aren’t alone in this; Americans in general are more hopeful about economic recovery and the end of the pandemic, according to the Forbes Advisor-Ipsos U.S. Consumer Confidence Weekly Tracker.

So what drove the late February stock sell-off? In part, it’s the speed with which yields have jumped higher. What’s more, rising interest rates make stocks somewhat less attractive because bonds now are paying more than the dividend yield for the S&P 500.

Meanwhile, there’s been a broader shift underway within the stock market. Investors have started betting on those stocks that should benefit most from the economy reopening, like restaurants or travel-related companies, and they’re ditching some of the pandemic favorites, like tech stocks. While the S&P 500 ended February up 2.6%, the tech-heavy Nasdaq 100 fell 2.4%—and former market darlings like Tesla (TSLA) tumbled more than 15%.

March offers opportunities for reflection and for optimism. March 23 marks the one-year anniversary of the S&P 500’s low of the short-lived bear market and the start of the current bull market. In the month ahead, the Covid-19 vaccine rollout, already well underway, could pick up speed, and Congress may pass another stimulus bill to help those Americans still struggling from the economic toll of the pandemic.

Things Are Returning to Normal, for Some

The Covid-19 pandemic continues to be a major theme, but the focus has largely shifted from the number of cases (and deaths) to the number of people who have been vaccinated. As of late February, 14% of the U.S. population has received at least one dose of a vaccine, according to figures from the Center for Disease Control.

A one-shot vaccine developed by Johnson & Johnson has also been added to the mix, bringing the total number of available options in the U.S. to three. The vaccine rollout could give investors some reason to be optimistic, notes Ross Mayfield, an investment strategy analyst with Baird based in Louisville, Ky.

“It certainly started out rocky but it’s picking up speed,” Mayfield says. “We’re still well on our way to our goal of getting a majority of people with the opportunity to get vaccinated by mid-2021, though slip-ups and bumps and bruises along the way were bound to happen.”

Cox anticipates there could be a reckoning of sorts that may be positive for stocks. “Markets are going to come to realize that herd immunity could happen faster than what had been previously predicted,” he says, adding that Americans may pull forward demand for things like travel that had been pushed to the back half of the year. “A return to normal work for parts of the economy that have been sidelined could be a lot closer than we thought.”

To gauge how consumers are feeling, Cox says he’ll monitor the retail sales report for February, which is scheduled for release by the Census Bureau on March 16. Consumer spending jumped 5.3% in January, more than economists had expected. “Retail sales are starting to accelerate some because people have so much cash and they’re looking to spend it on anything,”

Cox will also watch for a drop in the number of Americans filing for unemployment claims, as reported each Thursday by the Department of Labor. “If you start to see that number decline, then you know the recovery is for real, and people are being asked back to work,” he says.

Expectations for a Stimulus Deal Are Baked In

There may be optimism among investors about the economy improving, but the reality is that many Americans continue to struggle. More than 10 million people were unemployed as of January, and thousands of businesses have been forced to shutter. For example, more than 110,000 restaurants nationwide were closed either temporarily or permanently as of December, and the industry finished 2020 with 2.5 million fewer jobs, according to estimates by the National Restaurant Association.

The disparities of the so-called K-shaped recovery, in which some people are doing well while others are struggling, may be increasingly difficult to ignore. There’s an eviction crisis brewing, as renters owe $57 billion in unpaid rent, according to Moody’s Analytics. Even though the housing market has otherwise been “crazy strong,” the pandemic-era problems are still here, Cox notes.

“A lot of the problems—particularly financial—have been pushed off by heavy Fed intervention and government spending on stimulus,” Cox says. Looking ahead, it’s plausible that “very, very good news” will be tempered by a more sober reality, such as how to deal with this mountain of unpaid rent, he adds. “And there are going to be similar things that are going to happen that we have not even thought of yet.”

A risk to the stock market is that politicians ease up on assistance too early, Cox notes. For now, that doesn’t appear likely. President Joe Biden proposed a $1.9 trillion stimulus bill before taking office in January, and now the clock is ticking on getting something passed by Congress because both expanded unemployment benefits and an expanded eviction moratorium are set to expire in mid-March.

“March is going to be a huge month for whatever the next stimulus bill looks like,” Mayfield says. In 2020, Congress approved about $4 trillion in Covid relief measures. Current proposals include stimulus checks of $1,400, a proposal to raise the minimum wage to $15 an hour and extra federal unemployment benefits.

With Democrats in charge of both houses of Congress and the White House, Mayfield says passage of the next stimulus bill is already baked into the stock market. Any debate among politicians, then, will be about whether the amount of aid is too much, so it’s possible the total price tag for the bill will be reduced, he says.

“It’s a massive amount of spending by any measure,” Mayfield says. The targeted stimulus checks sent directly to Americans and expanded unemployment benefits have been a “super, super powerful tool to fight any recession, and especially this one,” though.

Still, there’s the risk that a stimulus bill doesn’t get passed by Congress by mid-March, which could create some “drama” around the expiration of benefits, Cox says. “That will cause a little consternation in the market as the deadline approaches and could be a small blip on the radar of what could otherwise be a pretty good month,” he says.

Making Sense of a ‘Funny’ Market

As the end of February shows, even by dynamics that might seem positive for the economy can rattle investors. The approaching one-year anniversary of the end of the Covid crash and subsequent recovery in stock prices, is yet another reminder that the market and the economy don’t always move in sync.

The comparisons to what was happening in March of 2020 will be mixed. While the one-year returns for the market are going to look “incredible,” year-over-year comparisons for some economic data will “get weird” this March, Mayfield says. That includes inflation, which investors are worried about right now, he adds.

A rotation that’s been underway in the market for months, with investors favoring cyclical and value stocks, is likely to continue, Mayfield says. And sectors like financials, energy, industrials and materials could outperform the broader market, he adds. “We believe the cyclical rotation continues in the near term, and any hiccups along the way are transitory,” he says.

As a result of that rotation, other sectors have fallen out of favor, especially the high flyers of the early months of the bull market. “I think it’s going to be tough sledding for some tech companies,” Cox says.

Still, what matters most to Mayfield in the month ahead is the same list of things he’s been focused on for months: vaccines, stimulus and how corporations are faring. “It’s a funny market,” he says. “There’s a ton going on, but it really boils down to a few specific things.”

The settlement allows all high school sports to resume in California. All players and sports will follow protocols put in place for college and...
Read more
Stock

U.S. stocks ended a wild session not far from where they started, thanks to a bounceback in shares of technology companies. The broad S&P...
Read more
Cryptocurrencies

Bitcoin: Nigeria bites back against cryptocurrency trading – Mail and Guardian

This story originally appeared in The Continent, the pan-African weekly newspaper designed to be read and shared on WhatsApp. Subscribe here. Bitcoin. The...
Read more

The latest on the coronavirus pandemic: Live updates – CNN

NASHVILLE, Tenn. – A tip, a hat and a pair of gloves provided all the evidence authorities needed to identify the remains of a man...
Read more
Sports

ernick protested police brutality and racism with a peaceful protest, he incited a harsh backlash and wasn’t signed back to the San Francisco 49ers...
Read more
Cryptocurrencies

SEC V. Ripple: The Cryptocurrency Trial Of The Century – Forbes

On Chairman Jay Clayton's last day, the SEC filed a lawsuit against Ripple, which many consider an ......
Read more
World News