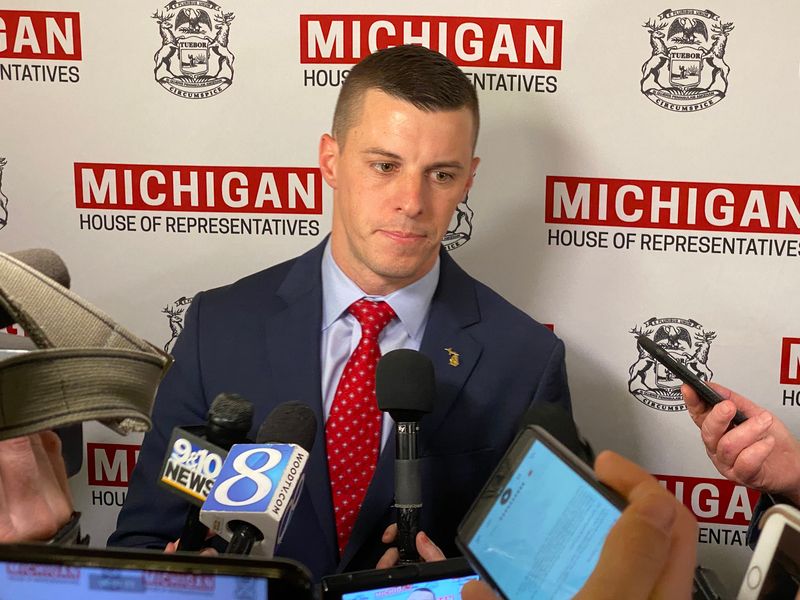 One of Kalamazoo’s most prominent business leaders has few kind words to say about the hiring of Lee Chatfield as the CEO of the region’s economic development organization.

The Republican former state House speaker was named as CEO of Southwest Michigan First last week. The appointment has set off partisan rancor and questions about Chatfield’s qualifications for the position, given that the 32-year-old who was term-limited out of office after six years has no economic or business development experience.

But it’s the “divisiveness” affiliated with Chatfield’s hiring that’s most concerning to Larry Bell, founder and chairman of Kalamazoo-based Bell’s Brewery Inc., which employs about 500 people in the city, the largest in the region.

“Southwest Michigan First is a private organization and they can obviously do what they want, but they are very visible in the region,” Bell told Crain’s on Tuesday. “The hiring of Mr. Chatfield is welcoming divisiveness. He’s certainly one of the most divisive politicians in the state. His actions toward the LGBTQ community have not aligned with how the majority of people in Kalamazoo feel.”

To that end, Chatfield’s past political stances on LGBTQ rights and most notably, his reluctance as House speaker to support legislatively expanding the state’s Elliott-Larsen Civil Rights Act, led to the Kalamazoo City Commission on Monday evening unanimously voting to withdraw from Southwest Michigan First’s Council of 100.

City Commissioner Erin Knott, who is also the executive director of Equality Michigan, introduced a motion at Monday’s commission meeting to withdraw $10,000 in annual funding to the organization, MiBiz reported.

In an interview with Crain’s on Tuesday, Knott said that the pulling of funding was “symbolic” and intended to help push the organization to further support adding protections for the LGBTQ population.

“Mr Chatfield in his personal life can have whatever views and thoughts,” Knott said. “But now as a CEO and a leader of an economic development engine in Southwest Michigan, it is his duty, in my opinion, to stand up for what’s right and to approach the work with a diversity, equity and inclusion lens.”

Knott also called on businesses and organizations to withdraw their memberships. Kalamazoo County, which pays the group about $75,000 a year, may do so, The Detroit News reported Tuesday afternoon.

Last week, Knott in a news release blasted Chatfield’s hiring for what she called his “anti-LGBTQ extremist” and said he does not share the values of Kalamazoo County or Southwest Michigan.

In response to criticisms, Chatfield in a tweet on Tuesday announced that Southwest Michigan First had “updated our official handbook … to more clearly articulate that we prohibit discrimination based on gender identity or sexual orientation in our hiring process.”

The statement from Chatfield continued: “Though it has always been a practice to treat one another with an equal amount of dignity and respect free of discrimination throughout our company’s existence, we are taking this important step today to make sure it is official. We have listened. We have heard. And now we are taking action.”

Chatfield’s appointment has brought an unusual amount of political attention and backlash to an economic development organization.

“If (Southwest Michigan First) is changing its focus more on being a business advocacy group and maybe not so much on attracting businesses and job creation, then that would make sense hiring him,” said Dean Whittaker, an economic development and real estate consultant and CEO of Holland-based Whittaker Associates Inc., told MiBiz. “If you want to turn the organization into a lobbying organization then that would make sense.”

While Knott acknowledged that Chatfield’s appointment to the role is done and she now wishes to work with his organization on advancing the matter, Bell continued to push back against the former lawmaker’s hiring.

“Lee Chatfield is the wrong person for CEO at Southwest Michigan First,” Bell wrote to Crain’s in a text message. “In an era when virtually all businesses and organizations are working on (diversity, equity and inclusion) policy, bringing in an individual who believes that granting rights to the LGBTQ community would infringe on religious rights of others does not make sense. Changing wording in a handbook does not change the long held and documented views of Mr.Chatfield.”

Bell also took issue with Chatfield’s political record of supporting the Line 5 oil pipeline in the Straits of Mackinac, noting that the beer business is dependent on clean water in the Great Lakes. Bell is the co-chair of the Great Lakes Business Network fighting to have the line shutdown.

Chatfield and Southwest Michigan First board members were unavailable or declined through spokespeople to answer questions posed Tuesday by Crain’s on the criticisms.

Chatfield assumed leadership of the more than 30-year-old economic development group on Monday, following the resignation late last year of longtime CEO Ron Kitchens, who took a similar position at an organization in Birmingham, Ala.

None of the qualifications on the position’s “opportunity profile” require specific economic development experience. However, the first qualification advertised for the position asks for “at least ten years of progressively responsible senior leadership experience, with a track record of success and proven results in leading a complex organization.”

Chatfield has no specific background in economic development or business recruitment. Before being elected to the state House, Chatfield was an athletic director, teacher and coach at Northern Michigan Christian Academy in Burt Lake.

Chatfield served in a leadership position for a total of four of his six years in the state House, the last two as speaker, meaning he led the GOP majority.

Jorgenson Consulting, which specializes in recruiting for nonprofit and economic development organizations, sent out its official search notification for the position on Jan. 13, according to an email obtained by Crain’s.

One economic development source noted that executive-level searches, such as the one undertaken by Southwest Michigan First, often take months, but that Chatfield was appointed CEO in less than a month.

Jorgenson Consulting Managing Partner and Principal Todd Jorgenson did not respond to a Crain’s request for comment.

Chatfield’s salary in the new position is unclear. Federal filings with the IRS show that former CEO Kitchens in 2018 made just more than $720,000. The advertisement for the job says the salary would “be competitive and commensurate with experience and qualifications.”

For his part, Chatfield previously told Crain’s that he’s “eager” to learn the economic development and planning business as the new leader of Southwest Michigan First.

The native of rural northern Michigan said he and his wife would move their family of five children from Levering to Kalamazoo area after the current school year ends.

“We were really excited about this opportunity because it was a nonpartisan role where I could take some of the experiences I built in the Legislature, dealing with different economic developers, and put it to practice,” Chatfield said Friday in an interview with Crain’s. “… I’m eager to take some of that experience (in the Legislature) and some of the context I’ve built and incorporate it into economic development and learn all I can about it and see what we can do to make Michigan more on the map and more competitive with many of our surrounding states.”

How the pandemic drove massive stock market gains, and what happens next – CNBC

After a volatile first week of 2021, the second week of the year has started in a slightly calmer fashion. Having said that,...
Read more
Economy

The Economy Can’t Wait Until January – The Wall Street Journal

The U.S. economy has recovered from the coronavirus shock faster than most economists expected. Unfortunately, things aren’t where they should be and additional progress...
Read more

Players involved in a breakaway European super league would be banned from competing in the World Cup and European Championships, Fifa and...
Read more
World News

At the beginning of any emerging disease outbreak, says health law expert Lawrence Gostin, it's always chaotic. "It was always going to be very...
Read more
Business

Ten mind-opening books of 2020 HBRP,Penguin,Springer,Macmillan,CharlesMorris,MagicSieve Too many business books are scarcely-disguised marketing materials for the...
Read more

Greetings from the land of leftovers. Cut yourself a slice of cold pie and catch up on the business news you need to know...
Read more
Business

News broke this morning that real GDP grew at an annualized rate of 33.1% in the third quarter...
Read more

Saturday in the Premier League starts with Liverpool's trip to Brighton. Will the Reds bounce back quickly from their midweek defeat? Dave Tindall previews....
Read more
Economy

Federal Open Market Committee members at their most recent gathering reaffirmed that the central bank will be keeping policy loose well into the future,...
Read more
Sports