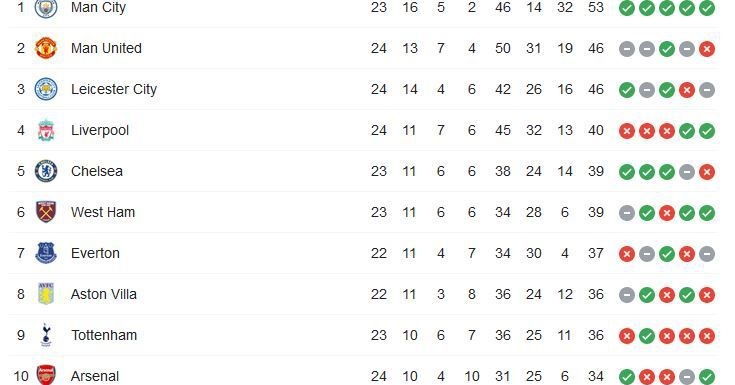 I just wanted to take a moment to appreciate the complete and total craziness that has been and will be the Premier League this season. The phrases “anything can happen” and “that’s why they play the games” are overused in punditry and usually used as an after-the-fact description rather than a predictive outlook, but can you honestly tell me you have any idea what is going to happen with the remaining Premier League slate?

Well, other than Manchester City winning the league going away because they are monsters and are dominating everybody. And that’s without Kevin De Bruyne in the lineup. Beyond City claiming the title, I could make an at least semi-legitimate case as to why every side ranked 2-10 will finish in the Top Four. And I could do that same for why they won’t.

The question, which may not need an answer, is whether that is because there are so many strong teams or because all the teams at the top are flawed. Another question that may not need or have an answer: is this the craziest Premier League season in recent memory? Ever? The only season that comes close is the 2015-16 season. But in that one, the traditional powers rounded out the top 5 behind Leicester City’s title. This year, the PL might send West Ham, Everton, and Aston Villa to the Champions League. It has already had the most teams ever finish a matchweek top of the table. We’ve seen clubs all the way down the table to 14th-placed Crystal Palace look like they might make a run at a European place at some point this season.

It feels like any club can beat anybody on their day. Well, other than, like Fulham or West Brom beating City. That ain’t happening.

Circling back to the teams currently in the top half of the league, here are my thoughts:

The $64,000 question is whether their improved form will be enough to lift themselves out of the massive hole they dug from October to December. They’ll need to sustain the current level / keep improving, and they’re going to need some help. I recently read somewhere that Arsenal will likely need around 2 points per match to give themselves a good shot at a European place, which is doable but tough. Data website 538 gives them a 30% chance of finishing in an EL place and a 4% chance of a CL spot. There are a lot of teams between Arsenal and 4th, but the Gunners are only 6 points adrift.

Arsenal will need a “surprise” result or two to make a European place happen. The Gunners have seven matches remaining against the top half, but I feel alright about those tilts. Mikel Arteta has shown in his time in charge the ability to put together solid tactical plans against good teams. My bigger concern is with the other matches against the bottom half teams. Arsenal cannot afford any dropped points.

And the remaining matches against Everton and West Ham are absolutely massive. My gut tells me whoever wins those matches finishes above the other. I’m definitely biased, but I think Arsenal get to at least 7th, which means that if Manchester City beat Spurs in the League Cup Final, Arsenal make the Europa League again.

For posterity’s sake, my predicted end of season table:

However it plays out for Arsenal, the last three months of the season, again title race aside, are going to be fun. A club wins two or three in a row, and they jump four or five places in the table. Embrace the chaos.

Is There a Way Back for a Forgotten Soccer Star? – The New York Times

A List Of Every Premier League Team’s Youngest Player in Europe – Balls.ie

Ripple, its former CEO and founder Christian Larsen, and its current CEO Bradley Garlinghouse are being sued by the US Securities and Exchange Commission....
Read more
Cryptocurrencies

Yuriko Nakao/Getty Images Value of the cryptocurrency market topped $1 trillion on Thursday, after Bitcoin hit a record above $37,000. The entire crypto...
Read more

Viewpoint: From Ethiopia’s Tigray region to Yemen, the dilemma of declaring a famine – BBC News

In 2001, Ethiopia, then led by the TPLF, disputed the existence of famine conditions in the south-east of the country, where it was fighting...
Read more

LeBron James: I Will Never ‘Shut Up’ And ‘Stick To Sports’ – Forbes

This Japanese Shop Is 1,020 Years Old. It Knows a Bit About Surviving Crises. – The New York Times

This appals the Saudis. In Riyadh last autumn, shortly after the mysterious missile attacks on Saudi Arabia's petrochemical plants, I attended a press conference...
Read more

Opinion | The Year We Were Asked to Pick: Your Economy or Your Life – The New York Times

The end of the year has been awkward for Gov. Andrew Cuomo. As he promotes his new, self-congratulatory book about navigating New York through...
Read more
Stock

Being too bearish in this pandemic-stricken U.S. stock market can be costly. That is apparently the lesson that Jeremy Grantham, co-founder and chief investment...
Read more
USA