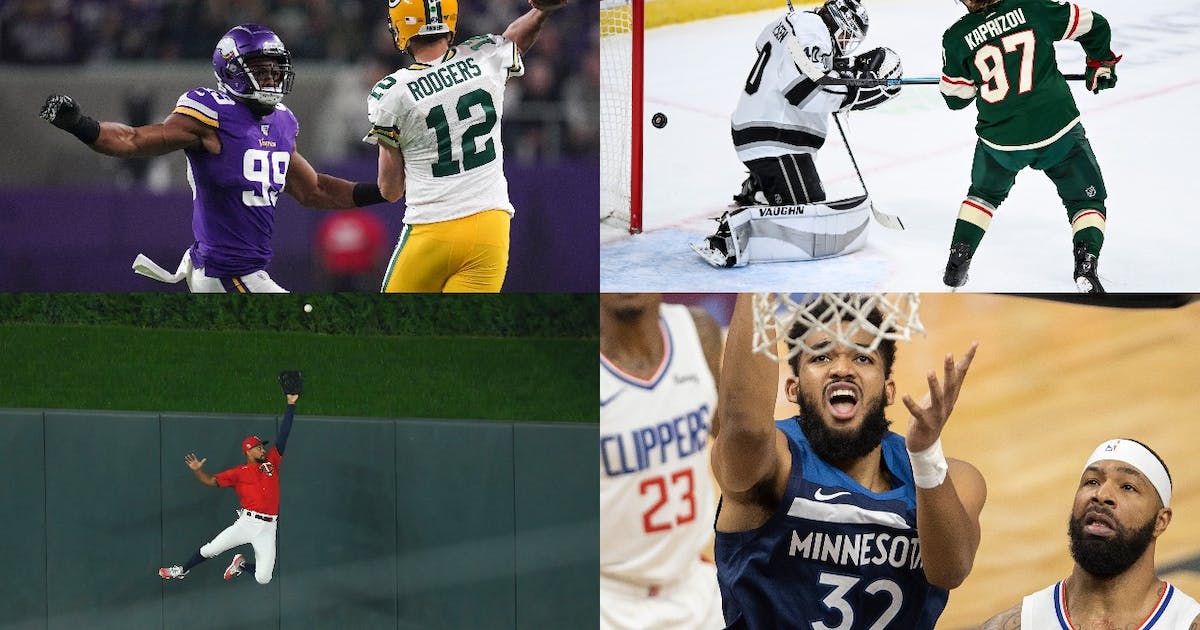 These are dark, cold, days for sports fans. The hockey and basketball seasons grind on, most of the games proving by the next week to have been meaningless, green grass is a cynical rumor, baseball is miles and months away, football is in rare repose, and even when a pandemic isn’t threatening us we huddle in our houses, sheltering from the cold.

Better times are ahead, and in sports as well as life, better times require health and normalcy.

Today, let’s dream of those times and what could make this an uncommon sports year for each major Minnesota sports team:

Vikings: Danielle Hunter and Michael Pierce return and give the Vikings’ defense the pass rusher and run stopper they need.

With no other upgrades, these two could vault the Vikings from seven to 10-ish victories and into the playoffs, and watching Hunter develop into an all-world defensive end has been one of the great thrills of watching the Vikings the past five years.

If you’re not a die-hard hockey fan who appreciates 2-1 games in which all of the goals scored banked off someone’s shin pad, the Wild have generally provided a boring, mediocre product for most of their existence. Kaprizov and Fiala have the skills to make the Wild thrilling, but they have yet to begin scoring goals the way they should.

If they get hot, the Wild could be more entertaining than at any point in their history.

Yes, he’s invaluable during the regular season, and has missed far too many games, but the Twins have reached a point where they are going to be judged by postseason performances, and Buxton has managed just six plate appearances in the past two postseasons.

With a deadened ball, his speed could become even more important, and he is the rare player who is capable of winning a game with his bat, arm or legs. He’s also the Twins’ most exciting player when healthy, and, if healthy, could combine with Andrelton Simmons to reprise Kirby Puckett and Greg Gagne’s brilliant up-the-middle fielding.

He lost his mother and a slew of relatives to COVID. He contracted COVID. He played in Charlotte on Friday after the Hornets had an outbreak of COVID. Here’s hoping we reach a point soon where he won’t have to worry about taking the court.

Gophers women’s basketball: Lindsay Whalen isn’t just one of the greatest athletes in Minnesota history, she’s one of the best role models. Winning at her alma mater would keep her voice at the forefront of social justice issues.

Lynx: Another trip to the WNBA finals. The Lynx have lost Whalen, Maya Moore, Seimone Augustus and Rebekkah Brunson. Rebuilding is in order. Instead, the Lynx made the league’s semifinals last year before losing to eventual champion Seattle, and are currently having one of the best offseasons in the sport.

In 2017, the Gophers were a No. 5 seed, but Nate Mason, the team’s star point guard, was bothered by a hip injury and managed just five points in a first-round loss to Middle Tennessee State.

In 2019, the Gophers won their first-round game against national power Louisville, but star forward Jordan Murphy’s back injury limited him to four minutes and zero points against Michigan State in a 70-50 second-round loss.

I want to see Marcus Carr healthy and at his best in this year’s tournament.

Saints: The right blend of fun, dynamic baseball in a wonderful ballpark.

Gopher men’s and women’s hockey: The return of crowds. Other sports can seem fine without crowds. Not hockey.

Sports quiz of the week: losers, maths and environmentally friendly shirts – The Guardian

At the Kapıkule border crossing between Bulgaria and Turkey, bitcoin is not accepted as a form of payment for the mandatory visa application fee....
Read more
Cryptocurrencies

Cryptocurrencies remain a popular option among many investors – WWAY NewsChannel 3

WILMINGTON, NC (WWAY) — Bitcoin has been around for more than ten years. But cryptocurrencies first became a household word...
Read more
Economy

Down But Not Out: Pandemic Likely Dealt Blow To Economy, But There’s Room For Hope – NPR

A sign noting a retail space is available for lease appears in San Francisco in December. A...
Read more

Why Automakers Are Raking In Blockbuster Profits Despite The Pandemic – NPR

It was a Saturday morning and Adam was feeling bold.  He'd made thousands of dollars on a single trade the night before, and...
Read more
USA

Newspaper headlines: ‘Anarchy in the USA’ and ‘the clap’s back’ – BBC News

WASHINGTON – Soon-to-be-ex-President Donald Trump left the White House early Wednesday and will spend his final minutes in office at his Mar-a-Lago estate in Florida – though he...
Read more
USA

Two BASE jumpers leaped from the outdoor rooftop bar of the Grand Hyatt Nashville on Friday, causing "mass panic" among the bar patrons who...
Read more
Cryptocurrencies

$40000 bitcoin in 2021? Cryptocurrency is quietly making its way back to record highs – Kitco NEWS

Editor's Note: Get caught up in minutes with our speedy summary of today's must-read news stories and expert opinions that moved the precious metals...
Read more

An often-cited measure of stock valuations, popularized by Warren Buffett, is affirming a growing fear on Wall Street: equity prices are richer than their...
Read more
Sports

Ethiopia’s prime minister has ordered federal military forces to launch a “final offensive” on the capital of the restive Tigray region after his 72-hour...
Read more