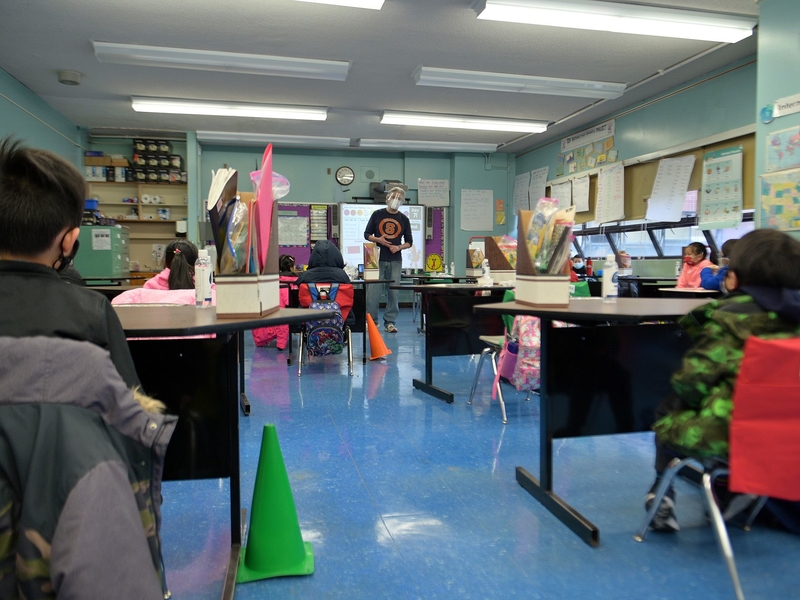 Democrats believe, correctly, that a strong recovery this year is crucial to both President Joe Biden’s economic agenda and his political prospects. That’s one reason they’re trying to push the $1.9 trillion American Rescue Plan through Congress so quickly.

For the plan to work, however, the economy has to be in a position to absorb as much stimulus as possible as quickly as possible. And that requires removing one of the largest supply-side impediments to growth: the slow pace of school reopenings.

From a public-health perspective, reopening schools is not a difficult call. The consensus is that, with proper safeguards, it’s largely safe to do so. The data suggests that the economics of reopening are favorable as well.

According to Burbio, which gathers information from school calendars nationwide, there is considerable variation throughout the U.S. Counties in the Mountain West and parts of the South are fully open or nearly so, while the West Coast, Southwest and Northeast remain fully or partially closed.\

The variation among counties reveals a substantial overlap between counties that have the highest levels of in-person instruction and those that have lowest unemployment rate. A similar pattern holds at the state level.

In December, near the height of the pandemic, seven states reported unemployment rates below 4%. Of those, four scored higher that 80% on the in-person index, while the other three scored above 60%.

None of this means — much less proves — that opening schools will lead to lower unemployment. It does, however, lend support to the contention that the effectiveness of the stimulus will be blunted if schools remain mostly closed. Even with wildly divergent initial economic conditions, there aren’t very many employment success stories in counties with little in-person instruction.

A strong message from the president himself, urging state and local governments to reopen schools, could help break the political gridlock that has caused some large districts to waver on their plans. Presidential support could create some space to allow them to demonstrate that reopening is safe and workable.

The partisan divide on the issue would lend particular power to Biden’s endorsement of school reopenings. Since last summer, Republicans and Democrats have differed sharply in both their willingness to support in-person instruction and their concerns regarding closures.

Republicans were much more likely to support five days per week of in-person instruction. They cited the possibility that children would fall behind in their academic progress and that parents would be unable to work as their chief concerns. On the other hand, a plurality of Democrats supported online-only education amid worries that both teachers and students would contract and spread the virus.

Since Biden has taken office, congressional Republicans have stepped up their criticism of Democrats for sacrificing the concerns of parents to the demands of teachers unions. At the state level, Democratic governors have expressed frustration with teachers unions but have been unwilling to cross them.

By strongly supporting a more rapid reopening of schools, Biden could undercut attacks from the right. He could also help create a bipartisan consensus at the federal level that would back up Democratic governors.

Publicly crossing the teacher’s unions would be a politically difficult move for a new Democratic president. Failing to get schools open as soon as possible, however, could prove to be politically disastrous for Biden — and devastating for the U.S. economy.

Karl W. Smith is a Bloomberg Opinion columnist. He was formerly vice president for federal policy at the Tax Foundation and assistant professor of economics at the University of North Carolina. He is also co-founder of the economics blog Modeled Behavior.

The Premiership’s festive fixture list is in tatters after London Irish’s match at Bath was cancelled due to a Covid-19 outbreak among the Exiles,...
Read more
Economy

According to Benjamin I. Sachs, a Harvard Law School professor, the board could also seize on a legal provision that allows the federal government...
Read more
Cryptocurrencies

LONDON — A Black ballerina at one of Europe's premier ballet companies has called out racism in the elite dance world.French national Chloé Lopes...
Read more
Economy

We keep being reminded that the stock market isn’t the economy. But then, is it possible for the market to go into a long...
Read more
Business

MTN Group remains committed to negotiating a US$65-million (R1-billion) sale of its 75% stake in its Syrian unit, the South African mobile...
Read more

USA TODAY is keeping track of the news surrounding COVID-19 as a pair of vaccines join the U.S. fight against a virus that has...
Read more
Economy

He added that the measures put in place to contain the spread of the coronavirus pandemic “are measures that we sought to assist those...
Read more
Economy

The American job engine has slowed significantly, stranding millions who have yet to find work after being idled by the pandemic, and offering fresh...
Read more

A third vaccine candidate, this one from AstraZeneca, has shown the capability to be up to 90% effective as pharmaceutical companies around the world race...
Read more