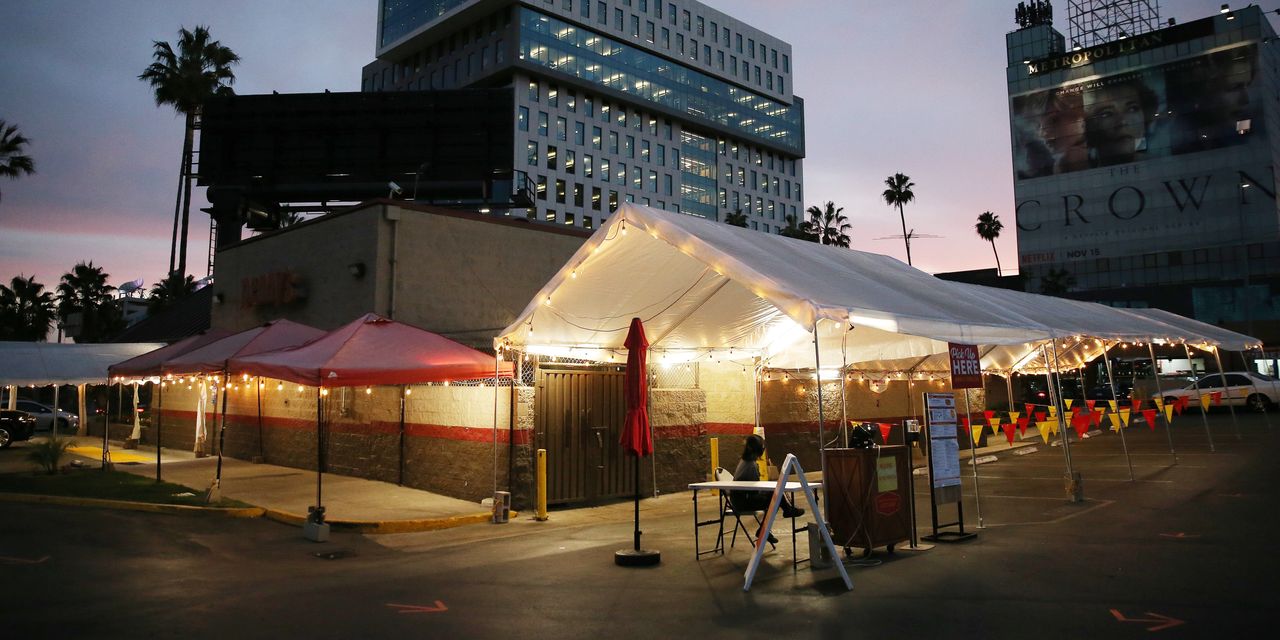 The numbers: The huge service side of the U.S. economy grew faster in January and companies added more workers, signaling better times ahead as the record surge in coronavirus cases receded.

A survey of top business leaders at non-manufacturing companies such as banks, hospitals and home builders rose to a two-year high of 58.7% from a revised 57.7% in the prior month, the Institute for Supply Management said Wednesday.

Readings above 50% signals that businesses are expanding, and numbers above 55% are usually a sign of broad strength.

A similar ISM survey of manufacturers was also strong in January.

“Respondents’ comments are more optimistic about business conditions and the economy,” said Anthony Nieves, chairman of the survey.

What happened: The amount of services that businesses provided in January largely held steady. The production index registered a healthy 59.9% down less than 1 point from the prior month.

Companies also increased orders for materials — food, paper products, computers and so forth — used to provide their services. The new orders gauge climbed 3.2 points to 61.8%.

A measure of jobs and hiring, perhaps the most critical part of the survey, jumped 6.5 points to 55.2% and hit the highest level since the pandemic began last March.

That’s an indication companies hired more workers or brought back employees in January as government restrictions were lifted.

It could be a good omen for a stronger monthly U.S. employment report on Friday from the U.S. Labor Department. Economists polled by Dow Jones and the Wall Street Journal predict a 105,000 increase in new jobs in January,

Fourteen of the 18 service industries tracked by ISM expanded last month, the same as in December.

Financial firms and construction companies were among the standout performers.

Businesses that deal more frequently and directly with customers, such as restaurants, retailers, hotels and entertainment venues, suffered another setback owing to new government restrictions that only began to be lifted in late January.

Big picture: The economy downshifted at the end of 2020 after a fresh onslaught from the coronavirus pandemic. Yet rising vaccinations, the lifting of business restrictions and the promise of more federal aid from Washington are giving companies a jump-start early in the new year.

“Business outlook for 2021 looks better. Companies are optimistic that conditions will start improving by the end of the second quarter,” said one senior executive.

What they are saying? “Prospects will improve as vaccinations pick up,
restrictions are lifted and the economy, in particular the
service side, reopens,” said Rubeela Farooqi, chief U.S. economist at High Frequency Economics.

The United Kingdom will formally end its transition period at 11 PM GMT on New Year’s Eve, meaning that the country will be officially...
Read more
European Premier League

‘We are all ruined’ without change: European Super League chairman hits back at criticism – CNBC

Amazon founder Jeff Bezos fulfilled his life-long dream as he travelled to space in his Blue Origin rocket lifting off from a Texas desert beyond the Karman line...
Read more

There will be another delay to the start of high school sports statewide, the OSAA announced Monday.Practices for the winter season originally were set...
Read more
Business

{{featured_button_text}} HONOLULU (AP) — Hawaii's commercial landlords would be prohibited from evicting tenants under a bill that state lawmakers are considering to help...
Read more
Stock

Anyone can beat the stock market, new research suggests – Fortune

A business was burglarized early Friday morning in Jefferson Park, police said. Officers responded to an alarm about 12:45 a.m. in the 4800 block...
Read more
Cryptocurrencies

Congratulations, the US got you cryptocurrency regulation for Christmas – The Verge

Under new proposed regulations from the Financial Crimes Enforcement Network, it may become much easier for the government to track bitcoin transactions. And while...
Read more

India’s government has ordered that all online news, social media and video streaming platforms such as Netflix and Amazon Prime are to be subject...
Read more
USA

CHICAGO (Nov. 10, 2020)— The U.S. Men’s National Team will return to the field for the first time since February when it faces Wales...
Read more
European Premier League

West Ham boss David Moyes is loving life in European football but has vowed not to take his eye off the ball in the...
Read more