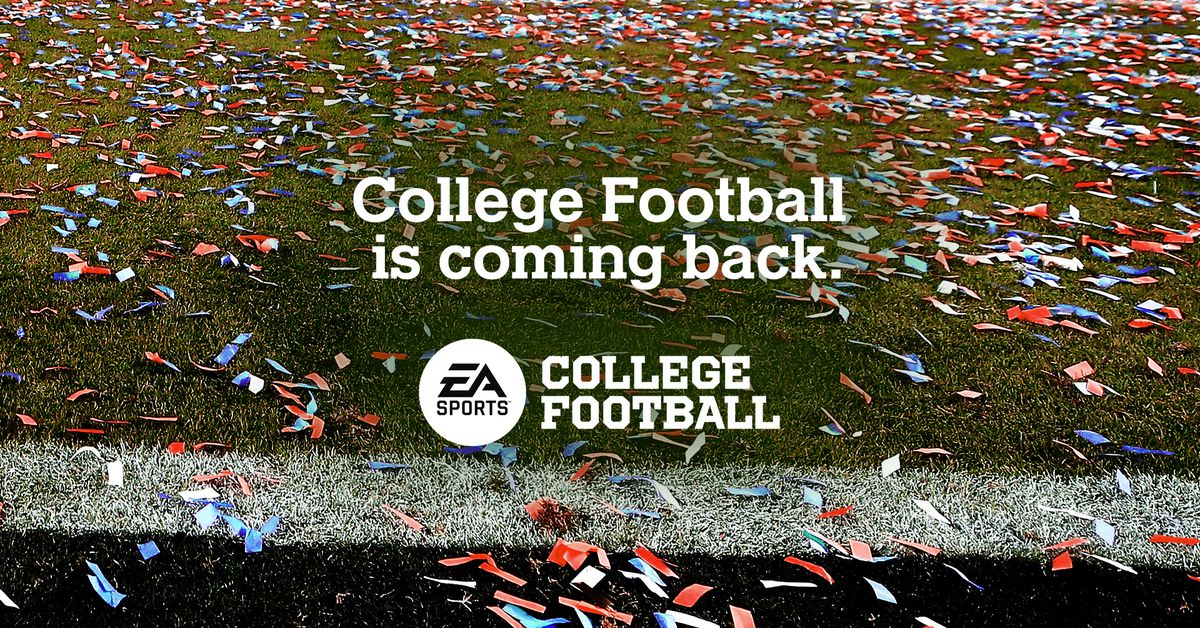 In a move that’s already lighting up the gaming world, EA Sports announced it would be rebooting its popular college football video game that had been discontinued since 2013.

According to ESPN, a return date or date to announce when the return will happen hasn’t been set. The game will not be available for the 2021 college football season, however.

“As we look for the momentum that we’re building on in sports, it all starts with the passion of our fans and the opportunities of what they are interested in,” EA Sports vice president and general manager, Daryl Holt told ESPN. “I don’t think a visit where I go outside wearing a piece of EA Sports branded apparel, that someone doesn’t go, ‘Hey, when is college football coming back?’ “

EA Sports has partnered with CLC, a collegiate licensing company, so that it could include the FBS programs, uniforms, traditions and playbooks, according to ESPN. More than 100 teams will be available.

The series was discontinued as the debate over student athletes being compensated for their names, images and likenesses (NIL) continued around the country and in legislative bodies. The old video game franchise did not use actual college football player names, but the roster closely mirrored the actual ones with player numbers and positions tied to general physical appearances of those playing on fields on Saturdays.

Legislation has advanced on the NIL issue, which could offer student athletes a chance to profit off of their time playing college football. Current NCAA rules forbid student athletes from selling their name, image or likeness while they are eligible in any athletic program.

Holt told ESPN that EA Sports would monitor changes to the NIL rules, but that the game would proceed either way.

“We’ll just keep tabs on everything as it develops and we’ll be ready,” Holt told ESPN. “That won’t be a problem for us. But it’s really, that’s not an answer for us right now to decide. We’re as much passengers as anyone else.

“So we make sure we deliver what our college football game players would want in a game. And that starts with just a very immersive experience and there’s lots of things we can do to bring the true college game play and game day to the virtual world.”

If certain NIL rights are changed, it could open the path for college football players to have their names, images and likenesses used in the game for monetary gain.

According to ESPN, the name of the franchise will change, with the plan to rebrand it as “EA Sports College Football.” ESPN also reported that the game is in its very early developmental stages.

In light of the recent US action against Ripple, cryptocurrency exchange Coinbase on Tuesday said it will suspend trading in XRP cryptocurrency...
Read more
Economy

MBOMBELA - A new R1.2 billiion fresh produce market in Mbombela, Mpumalanga, has been earmarked to drag the province out of economic recession.Its economy contracted by...
Read more
Sports

In the world of sports, this feels like an instant replay.Similar to what happened last March, the Michigan High School Athletic Association has shut...
Read more
Economy

As Some Deficit Hawks Turn Dove, the New Politics of Debt Are on Display – The New York Times

And while running big deficits might have once stoked fears about inflation — as too many dollars chased too few goods — price gains...
Read more
Sports

The Connecticut Inter Athletic Conference has approved the beginning of practices on Jan. 19, and games on Feb. 8, for high school winter sports,...
Read more

The federal program intended to save jobs at small businesses during the pandemic supported at least 250,000 workers in Maine but nearly a third...
Read more
European Premier League

Manchester City have been on a menacing run at the summit of the Premier League in recent weeks.  Pep Guardiola's side have toppled every opponent...
Read more

{{featured_button_text}} One league is ready to play. Another is getting close. A third is still in limbo.Local basketball teams are preparing to play...
Read more
World News

Cryptocurrency is a form of digital, "decentralized money" — not government-issued but managed via private encrypted databases, called blockchains.  Bitcoin is the original, and still...
Read more