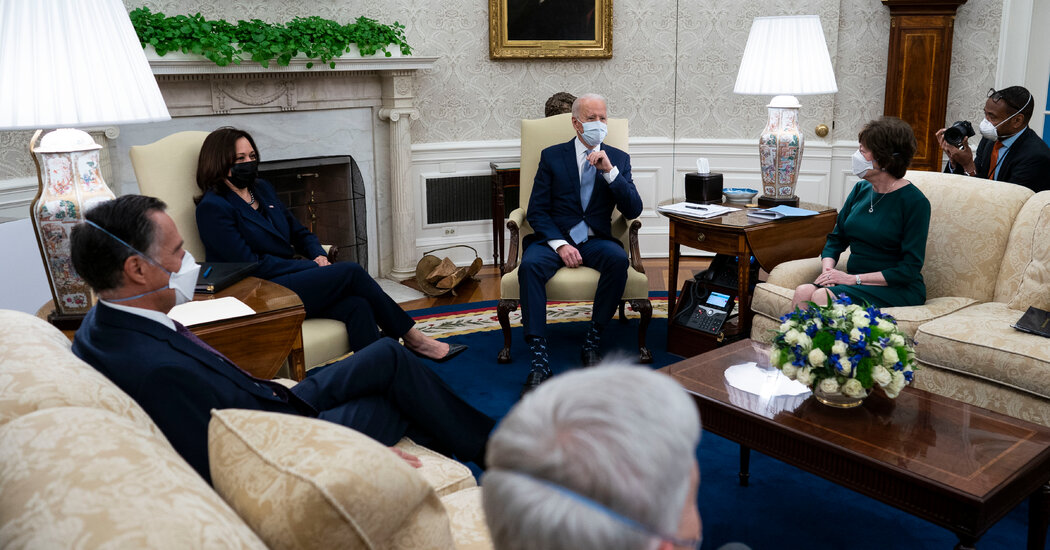 (Want to get this newsletter in your inbox? Here’s the sign-up.)

But administration officials warned that he wouldn’t accept their scaled-down proposal. In fact, Jen Psaki, the White House press secretary, emphasized his determination to push through his $1.9 trillion stimulus bill.

Shortly before the meeting at the White House, above, Democratic congressional leaders released a blueprint that could pave the way for passing the president’s plan with only Democratic votes through a process known as budget reconciliation.

The $618 billion Republican alternative plan omits a federal minimum wage increase that Mr. Biden included. It would also whittle down his proposal to send $1,400 checks to many Americans, and limit it to lower-income earners.

The coalition of center-right Republican senators, led by Susan Collins of Maine, billed its offer as a way for Mr. Biden to pass a pandemic aid bill with bipartisan support and make good on his inauguration pledge to unite the country.

2. The U.S. economy will return to its pre-pandemic size later this year.

That’s the projection of the nonpartisan Congressional Budget Office, which forecast a midyear recovery even if Congress does not approve any more pandemic aid. But it will be years before everyone thrown off the job by the pandemic is able to return to work.

The brightening outlook is a result of large sectors of the economy adapting better and more rapidly to the pandemic than expected, as well as increased growth from a $900 billion economic aid package that Congress passed in December. Above, empty businesses on Western Boulevard in Los Angeles last month.

The budget office expects the unemployment rate to fall to 5.3 percent at the end of the year, down from an 8.4 percent projection in July. The economy is expected to grow by 3.7 percent this year.

4. Deep-seated mistrust among Black families is holding back school reopenings.

Even as President Biden says schools can safely resume in-person education, hundreds of thousands of Black parents say they are not ready to send their children back.

Education experts and parents say decades of racism, institutionalized segregation and mistreatment of Black children have left Black communities to doubt that school districts are being upfront about the risks.

“Everything that has happened in this country just in the last year has proved that Black people have no reason to trust the government,” said Farah Despeignes, above center, a Black parent of two in the Bronx and a representative on the local school board.

And, if you’ve lost someone significant in your life to Covid-19, we want to hear from you for an upcoming article on grief during the pandemic.

5. A powerful winter storm pummeled much of the Northeast.

Travel was disrupted for millions of people along the Interstate 95 corridor, with two feet of snow expected in some places by Tuesday. Covid-19 vaccination sites were closed in New York City, Philadelphia and other areas. But there was little change for people working from home and students learning virtually.

Is it a blizzard? You might think so if you’ve been out shoveling in the blinding snow. But what has covered the Northeast is not technically a blizzard, according to the definition by the National Weather Service. It’s just a lowly nor’easter. Above, a snow blower out in Brooklyn, N.Y.

But it’s the pandemic, not the snow, that is making this year’s annual Groundhog Day tradition in Punxsutawney, Pa., a virtual event on Tuesday. The livestream to answer the question “Will the groundhog see his shadow?” (and therefore go underground for another six weeks of winter) is still planned for 6:30 a.m. Eastern time.

When the pandemic hit, banks cut credit to businesses that suddenly looked risky. Investors happily stepped in, buying their stocks and bonds and infusing them with funding to survive.

Stocks don’t normally rise as the economy flounders. But buyers were not acting from benevolence. For much of last year, they were hungry for some sort of return on their money, given that interest rates are near zero.

A different company that has welcomed investments is Robinhood, the online trading firm at the center of a trading frenzy over GameStop. It raised an additional $2.4 billion over the weekend, after needing to substantially increase deposits with the clearinghouse that processes its trades.

7. For this spaceflight, you don’t need a $55 million ticket.

Last week, we got word that three private citizens will each pay that price for an eight-day trip to the International Space Station as soon as next year.

Today, the 37-year-old billionaire Jared Isaacman, above, announced he would raffle off a seat on a separate private SpaceX flight for a three- or four-day trip in October.

He is giving two of the seats to St. Jude Children’s Research Hospital in Memphis, which treats children at no charge and develops cures for childhood cancers. One of those seats will go to a frontline health care worker at St. Jude.

Another seat will be raffled off to someone at random, with the goal of raising at least $200 million for St. Jude. You do not need to donate to enter, but each dollar donated counts as 10 entries.

8. Can a writing test predict if you’ll get Alzheimer’s?

Using an artificial intelligence program that looked for subtle differences in word usage, IBM researchers predicted, with 75 percent accuracy, who would develop Alzheimer’s disease, according to results published in a Lancet journal.

Such distinctive language patterns, investigators suspect, may serve as early warning signs for people with a wide variety of neurological illnesses besides Alzheimer’s.

And Tony Bennett, the 94-year-old singer whose popularity saw a resurgence over the past decade, has been diagnosed with Alzheimer’s. His symptoms first appeared in 2015.

“Life is a gift — even with Alzheimer’s,” Bennett tweeted this morning.

9. The case of the serial sperm donor.

A Dutch musician has fathered hundreds of children in more than a dozen countries. Some of the families are worried about the complications posed by having so many unwittingly related children.

A patchwork of laws ostensibly addresses who can donate sperm, where and how often, in part to avoid introducing or amplifying genetic disabilities in a population. But in practice, sperm banks are poorly regulated.

“The children are the victims in this case,” said a lawyer in the Netherlands who was contacted by 12 mothers who used the donor’s sperm. “The only thing these women can do is go to the public and hope everyone in the world knows not to use this guy.”

10. And finally, an entire film festival for an audience of one.

Organizers of the Nordic countries’ most important festival, the Goteborg Film Festival, decided to accentuate the pandemic’s sense of solitude as well as film’s ability to bring comfort by offering a chance for one person to screen the films on an isolated island off the west coast of Sweden.

“We wanted to experiment with that, to isolate that feeling, and take it to the extreme,” said the festival’s artistic director.

Lisa Enroth, above, a 41-year-old nurse from southern Sweden, was chosen out of 12,000 applicants. On Saturday, she arrived on a rocky outcrop called Pater Noster to watch the 70 films.

Have a cinematic evening.

Your Evening Briefing is posted at 6 p.m. Eastern.

Want to catch up on past briefings? You can browse them here.

What did you like? What do you want to see here? Let us know at briefing@nytimes.com.

What to watch as China rolls out an economic plan to overtake the US – Moneyweb.co.za

Congressional negotiators were down to a handful of issues on Saturday, as they sought to finalize an almost $1tn Covid-19 economic relief package.The Senate...
Read more
Economy

A surge in state investments has helped lift the Chinese economy from the effects of Covid-19, but likely has worsened one of its deepest...
Read more

The frantic pace of Transfer Deadline Day is fast approaching with clubs having just four days to complete business this month before the window...
Read more
Sports

Dozens of members of the far-right, anti-immigrant, all-male group Proud Boys, who have repeatedly been involved in violent street protests and were among those...
Read more

The US is on ‘inequality autopilot’ – how can Biden’s treasury pick help change course? – The Guardian

Teresa Marez has never heard of Janet Yellen, likely to be the next treasury secretary of the United States. But she and millions of...
Read more
Stock

In this article, we present to you the 16 Best Space Stocks to Buy Now. If you’re in a hurry, click to skip ahead...
Read more

NEW YORK, Feb. 16, 2021 /PRNewswire/ -- The excitement around cryptocurrencies continues to grow across the board, and it is driven by several factors....
Read more
USA

The U.S reported its 12 millionth case of COVID-19 on Saturday, days after the nation surpassed 250,000 deaths from the coronavirus — by far...
Read more
European Premier League

Could resale value, rather than revenue, be the real attraction of a European super league to England's top soccer clubs?Documents obtained by The Times...
Read more