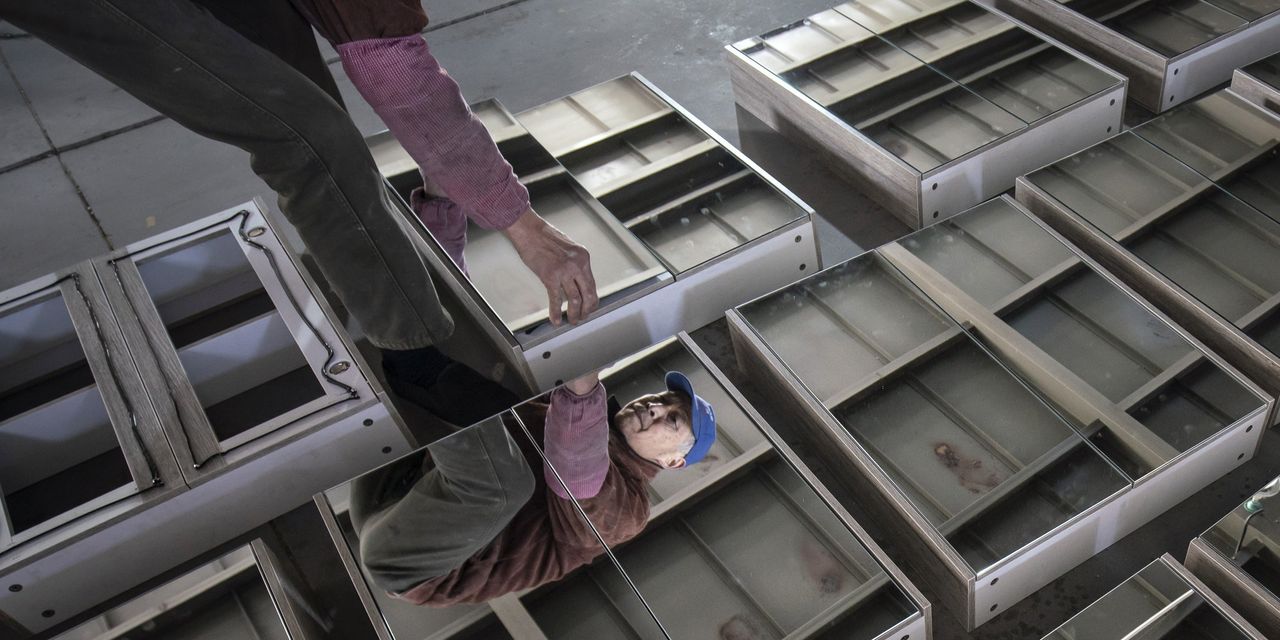 Official gauges of industrial and services activities eased more than expected in January, with demand taking a particular hit as authorities discouraged travel ahead of February’s Lunar New Year festival, according to data from Beijing’s National Bureau of Statistics.

China’s official manufacturing purchasing managers index softened to 51.3 in January, lower than December’s 51.9 reading and the 51.5 median forecast among economists polled by The Wall Street Journal.

The nonmanufacturing PMI, which includes services and construction activity, weakened even more to 52.4, from 55.7 in December, according to the statistics bureau.

A personal, guided tour to the best scoops and stories every day in The Wall Street Journal.

Though both indexes showed activity remaining above the 50 mark that separates expansion from contraction, the new-orders subindex for the nonmanufacturing sector, a key measure of demand, dropped below the 50 line—to 48.7 from 51.9 the previous month—marking the lowest level since February last year, when the Chinese economy was absorbing the very worst of the coronavirus shock.

Sunday’s PMI readings provided the first look at the economic damage wrought by fresh outbreaks of the coronavirus in northern China—the worst since the initial outbreak that began in Wuhan about a year ago. The latest wave has sickened hundreds and put restrictions on the movements of millions of people.

To keep the number of cases from rising further, government authorities nationwide are dissuading residents from traveling during the most important holiday of the year, Lunar New Year, which runs for a week beginning Feb. 12.

The stricter quarantine and testing requirements imposed during this frantic season—when hundreds of millions of people typically travel to see family and splash out on gifts and dining—are likely to restrain economic activity.

Hunter Chan, an economist at Standard Chartered Bank, expects the damage to persist through the end of the festival in late February, though he is optimistic that the economy will rebound.

“The economy will normalize quickly as effective control measures limit the prolonged impact,” he said.

As coronavirus restrictions threaten a second straight year of Lunar New Year festivities, local governments have in recent weeks rolled out shopping vouchers in hopes of enticing people to stay in place over the holiday and to keep spending.

China’s services and consumption sectors have lagged behind its broader economic recovery over the past year amid lingering concerns over infections and worker incomes that have been squeezed by the pandemic.

China’s 2.3% expansion in gross domestic product in 2020, which made it the only major economy to post growth last year, was powered largely by industrial production, exports and government-backed investment. Retail sales, by contrast, was one of the few closely watched economic indicators to finish 2020 lower than the prior year.

In addition to the weakness in the services sector, Sunday’s PMI reading also showed emerging signs of slowing momentum in the industrial sector, with both demand and production easing.

The subindex measuring manufacturing production fell to 53.5 in January, from 54.2 in December, while total new orders dropped to 52.3 from December’s 53.6 reading. The subindex tracking new export orders also eased to 50.2 from 51.3 in December, but remained above the 50 mark for a fifth straight month.

China’s statistics bureau said some workers had returned to their hometowns in anticipation of the tightening control measures, leading to a labor shortage at some factories.

—Grace Zhu contributed to this article.

Write to Jonathan Cheng at jonathan.cheng@wsj.com

EXCLUSIVE: While there has been question about big movies holding their theatrical release dates around the holidays in this COVID-19 moment, Universal’s News of...
Read more
European Premier League

Napoli president working on plan for new £8.5billion European division – but clubs will qualify based on me… – talkSPORT.com

“We were doing really crazy things,” Mr. Bry said. “We discovered that a lot of employees have home lab setups and are working on...
Read more
Cryptocurrencies

Due to a surge of cryptocurrency-fueled crimes, federal law enforcement is seizing a lot of bitcoin. Now the US government is figuring out what...
Read more
USA

Goal for Scioscia? Get Team USA the gold – MLB.com

NEW YORK -- Mike Scioscia has accomplished quite a bit during his 45 years in professional baseball. Besides being one of the best defensive...
Read more

How seismic was the stock-market move that kicked off the week following news of effective coronavirus vaccine candidate? It was the best week ever...
Read more
USA

The U.S. set another daily record for coronavirus cases and the world surpassed 50 million total cases Sunday as President-elect Joe Biden promised to do...
Read more

Last year when the COVID-19 pandemic hit, billions of people all over the world took to their homes, staying indoors to keep themselves and...
Read more
World News