The U.S. economy shrank in 2020 for the first time since the financial crisis, but grew rapidly in the fourth quarter and is forecast to continue recovering following its worst year since the 1940s.

A strong rebound in the second half of 2020 wasn’t enough to overcome the economic shock created by the pandemic earlier in the year. Measured year-over-year, the economy contracted 3.5% last year, the largest decline since just after World War II and the first since 2009 in the wake of the financial crisis. Measured from the fourth quarter to the same quarter a year earlier the economy shrank 2.5%.

Fourth-quarter U.S. gross domestic product—the value of all goods and services produced across the economy, adjusted for seasonality and inflation—grew at a 4% annual rate, the Commerce Department said on Thursday. That joined a record 33.4% annual rate of growth in the third quarter to further reduce losses from earlier in the pandemic.

How the 2020 Economy Shrank

Reduced spending on services accounted for most of the 3.5% annual contraction while spending on goods increased. 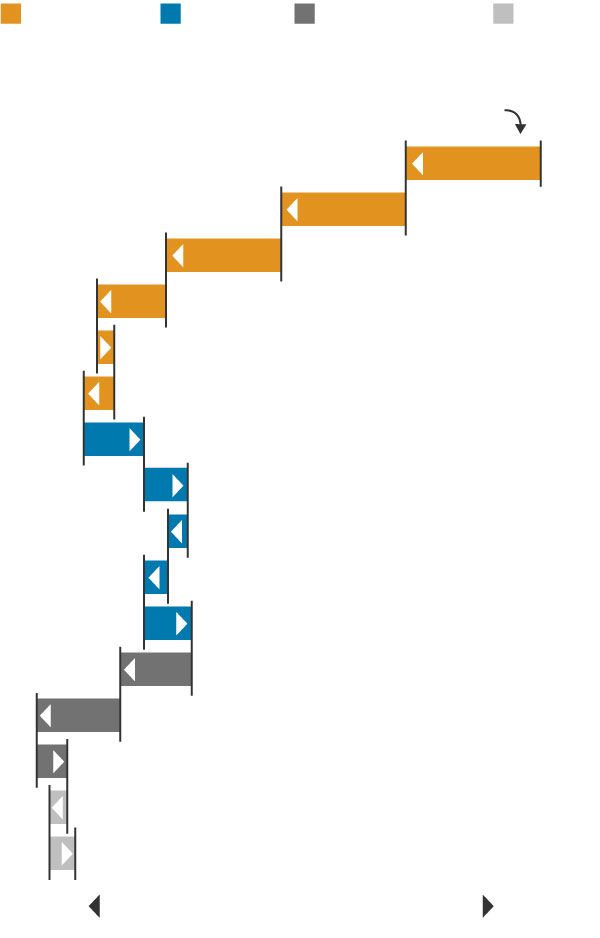 Lower food services spending accounted for 1.02 points of the drop

Economists project that growth will pick up this year once the pandemic is under control, though the coronavirus remains a threat to the global economy.

“We still have a ways to go, but it’s positive,” Beth Ann Bovino, U.S. chief economist at S&P Global Ratings, said of U.S. growth. “It’s a slow heal,” she added, pointing to still-hurting parts of the economy such as in-person services businesses and energy production.

Consumer spending, which accounts for more than two-thirds of U.S. economic output, slowed to a 2.5% seasonally adjusted annual rate in the holiday quarter, down from a 41% rebound in the third quarter, as consumers pulled back from shopping amid high coronavirus infection rates and business closures in some regions.

Overall spending on goods declined in the fourth quarter. And spending on durable goods—products designed to last at least three years such as furniture and washing machines—was flat, following increased spending in the prior quarter as households purchased home entertainment, fitness and office supplies as they worked from home.

Continued strength in corporate and residential housing investment, however, has helped set the economy up “for what could be a really good 2021,” said James Knightley, an economist at ING Financial Markets LLC.

He said stimulus checks from the December coronavirus-aid package, the prospect of additional government aid this year, high household savings and vaccination programs point to a continued recovery. “There’s basically a wall of money being thrown at the economy,” Mr. Knightley said.

The Labor Department separately said the number of workers seeking unemployment benefits dropped last week, indicating a recent easing in the pace of layoffs, though the labor market remains mired in a winter slowdown. New jobless claims, a proxy for layoffs, dropped to 847,000 in the week ended Jan. 23, down from a revised 914,000 the week before. Claims have for months remained well above the pre-pandemic peak of 695,000.

The coronavirus and related business restrictions put in place early in the pandemic upended the U.S. economy early last year, triggering business and school closures, a steep drop in demand for goods and services and record job losses.

The economy rebounded in the second half of the year as it reopened, with sharp gains in employment and consumer spending over the summer that were helped by trillions of dollars in government aid.

The International Monetary Fund expects the U.S. economy to grow 5.1% this year, while economists surveyed by The Wall Street Journal projected 4.3% growth, measured from the fourth quarter of the prior year.

Other factors at play include accumulated savings from those who continued to work but reduced spending during the pandemic.

Households saved an outsize share of disposable income in 2020. The personal-saving rate—the portion of after-tax income that consumers don’t spend—was a seasonally adjusted 13.4% in the fourth quarter, compared with 7.3% a year earlier. Economists say the extra financial buffer should support greater spending once pandemic restrictions ease.

What do you think the economic recovery will look like? Join the conversation below.

A pickup in spending would in turn lead to more hiring, particularly in some of the hardest-hit sectors such as restaurants, hotels, stores and personal services.

“We expect there to be plenty of growth over the late spring and summer as the service sector of the economy ramps back up,” said Daniil Manaenkov, an economic forecaster at the University of Michigan.

Several states, including California and New York, have recently rolled back restrictions, and many southern states essentially have no restrictions, Mr. Manaenkov said. That allows for activity to grow quickly once consumers feel good about heading out, he said.

U.S. employers are poised to add more than five million jobs this year, according to economists surveyed by the Journal. That would make 2021 the best year for employment gains in records dating to 1939, topping 4.3 million jobs created in 1946 at the start of the post-World War II expansion.

Still, even record-setting hiring this year would leave the U.S. millions of jobs short of pre-pandemic employment heading into 2022.

The impact of the pandemic has been unevenly felt across the country, with some regions such as the South holding up better than others.

And some industries have thrived, such as technology companies, logistics businesses and online retailers, while others such as in-person services businesses have struggled.

Patty Casey, manager of the Bellezza Salon in Omaha, Neb., said she is optimistic about 2021. “Anything’s going to be an improvement over 2020. People are going to get vaccinated and are going to feel better about coming in.”

The salon shut down for two months last spring and two weeks in November, but now “people are slowly starting to come back,” Ms. Casey said.

The housing market continued to perform strongly, as families confined at home bought bigger residences or spent money on improving their properties. Residential fixed investment rose at a 33.5% pace in the fourth quarter from the prior quarter, compared with a 63% rate in the third.

Businesses also spent at a solid pace. Nonresidential fixed investment—which reflects spending on software, research and development, equipment and structures—rose at a 13.8% rate from October through December.

Michael Stephans, co-owner of the Velvet Shoestring, a high-end furniture resale and décor shop in Williamsburg, Va., said business has been good and sales held steady during the holidays, months that are typically slower because “a sectional sofa is not a Christmas item.”

“I think a lot more people have conserved money on vacations and things like that. So they’re spending them in the house,” he said.

For Hank Saipe, who owns five self-storage facilities in Denver, Covid-19’s impact has been relatively minor. Occupancy rates are up from last year as more people are moving house and setting up home offices during the pandemic, which means he has been able to raise rental rates, too.

Regarding the pandemic more broadly, the 65-year old said he is “trying to be as strict as possible,” wearing masks and limiting travel until he gets a vaccine. It has been a year since he last visited a theater or went to the movies, and he does curbside pickup from restaurants rather than dining inside. “I’m looking forward to my daughter’s wedding in August. Hopefully, we can have it,” Mr. Saipe said.

—Eric Morath and Hannah Lang contributed to this article.

Write to Harriet Torry at harriet.torry@wsj.com

Is the Nigerian economy collapsing? – Vanguard

LOUISVILLE, Ky. – Clemson’s Valerie Cagle and the Oklahoma duo of Jayda Coleman and Tiare Jennings are the three finalists for the 2021 NFCA /...
Read more
Sports

The Jamaica Football Federation (JFF) in association with CONCACAF, will be hosting a team from the Union of European Football Associations (UEFA) Assist League...
Read more
Sports

As a lengthy discussion about the start date of the winter season continued, Thom Holdgate, a co-chair of the Massachusetts Interscholastic Athletic Association’s COVID-19...
Read more
Cryptocurrencies

The economy on the brink, Taliban rely on former technocrats – Associated Press

KABUL, Afghanistan (AP) — When the Taliban swept into power, they found Afghanistan’s economy fast approaching the brink and were faced with harrowing predictions...
Read more
USA

I have five thoughts about the USA men’s basketball team.And none of them are complimentary.Simply calling it a “national embarrassment” doesn’t cover it....
Read more
European Premier League

U.S. stocks on Friday headed modestly lower on the last day of trading for the month, with technology stocks set to register the sharpest...
Read more
Stock

The USA Men’s Basketball team will compete in the Tokyo Olympics this summer with a roster featuring NBA stars as well as former gold-medal...
Read more