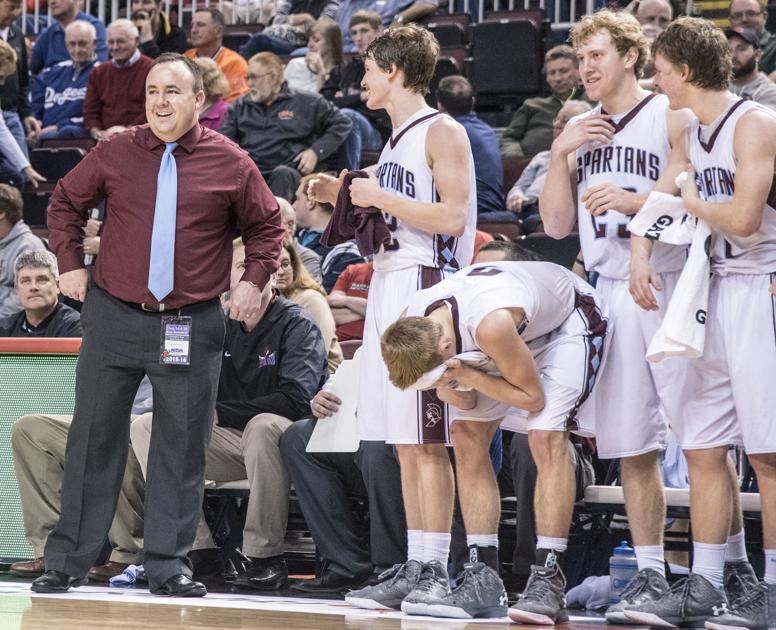 Pick any positive-describing adjective and the veteran St. Joseph-Ogden High School educator was experiencing it when students walked through the doors at SJ-O for the first time in more than five months.

“We all get into this to hopefully help kids and if not, then we shouldn’t be in this profession,” said Brooks, SJ-O’s superintendent and the last coach to lead an area boys’ basketball team to a state title when SJ-O won a Class 2A state championship in 2016. “When you saw the kids walk through the door, it was uplifting.”

The initial surge of exhilaration, however, that was palpable through the hallways that summer day slowly went away in the coming weeks and months. Brooks could see it in the students’ faces — even with them wearing masks because of the COVID-19 pandemic.

“Where my office is at, in a typical fall, I get the great fortune to hear our marching band practice during first period,” Brooks said. “We didn’t have the normal energy of a high school. All of a sudden, the reality hit us that we’re all here for school and academics, and that’s the easy answer, but at the same time, these kids get four years of high school. They want to be able to do those extra things they love to do.”

Like sports. SJ-O, with its enrollment of 467 students and winner of The News-Gazette’s Program of the Year 10 times since the award was established in 2005 by this sports department, has only offered boys’ golf, girls’ golf, boys’ cross-country, girls’ tennis and girls’ cross-country so far this school year.

But, good news appears to be on the way: Region 6 — which covers The News-Gazette’s coverage area — entered Phase 4 on Thursday, and Illinois Department of Public Health Director Dr. Ngozi Ezike said Friday all regions in Phase 4 can play sports.

What that process will look like will play out in the coming weeks trying to cram sports like basketball, football, wrestling, baseball, softball and so many more in during the next five months.

“In a perfect scenario, I’d love to see the spring sports get as close to a full season as they can and also have a true postseason,” Brooks said. “I hate to see any of these teams miss out, but a typical varsity athlete is in their junior and senior year. Some of them, in good programs, they don’t get a chance to play much until their senior year. If you go two years without a postseason for spring sports, we’ll have a group of varsity athletes that never had a chance to experience postseason play, and it’s incredibly sad.”

When Brooks coached SJ-O to a state title in 2016, four starters played multiple sports. What will a school like SJ-O do if seasons overlap?

“We’ve talked a decent amount about it administratively about how we want to approach it,” Brooks said. “We haven’t made any final decisions, but at the same time, we don’t want to take anything away from a kid. If we do have sports that overlap, in a normal year, we don’t let kids play multiple sports in the same season. We probably will ask our coaches to work with each other. I’m sure they will. It’s not easy for the kid. It’s not easy for the coach. At this point, in late January, after going through almost a year now of this, it’d be a good problem for us to have.”

In the end, Brooks is going about this with one goal.

“Let’s try to do as much as we can for these kids,” he said.

For Denver sports, it’s still the Broncos and everyone else. – Mile High Report

“I grew up with asthma as a kid, so bad air quality holds a visceral significance for me,” says Sidhant (Sid) Pai...
Read more
Stock

TipRanks3 “Strong Buy” Stocks That Could Reach New HighsThe markets have been on a tear of late despite the headwinds presented by the novel...
Read more
Cryptocurrencies

Yesterday, security researcher KrebsOnSecurity reported that several cryptocurrency platforms hosted by popular hosting provider Godaddy have been attacked over the past week.According to KrebsOnSecurity,...
Read more

When history looks back for a signature week of the Trump presidency, Christmas 2020 may win the prize.There was a pattern, and likely foreshadowing...
Read more
World News

Xi wants to make China more lovable around the world. He may have a tough job. – NBC News

Faced with widespread international criticism over China's approach to a litany of issues both at home and abroad, its leader has an idea: a...
Read more
World News

Germany will close most shops from Wednesday until 10 January and ban the sale of fireworks for New Year’s Eve, after Angela Merkel and...
Read more

Gannett's lawyers say the order is "unconstitutional", and invades the rights of both the news organisation and its readers, citing a Supreme Court judgement...
Read more
Cryptocurrencies

Could you earn interest on bitcoin and cryptocurrency? – This is Money

Hoping that cryptocurrency - be it bitcoin, ethereum or any other - appreciates in value is the main way to make money in the...
Read more
Business

"CLORALEN Disinfectant Bleach is the first product in AlEn's portfolio of household cleaning and laundry products, designed to be a trusted source of disinfection...
Read more
European Premier League

Scudamore (left) stepped down from his role at the Premier League at the end of 2018There must be consequences for the six English clubs...
Read more
Business