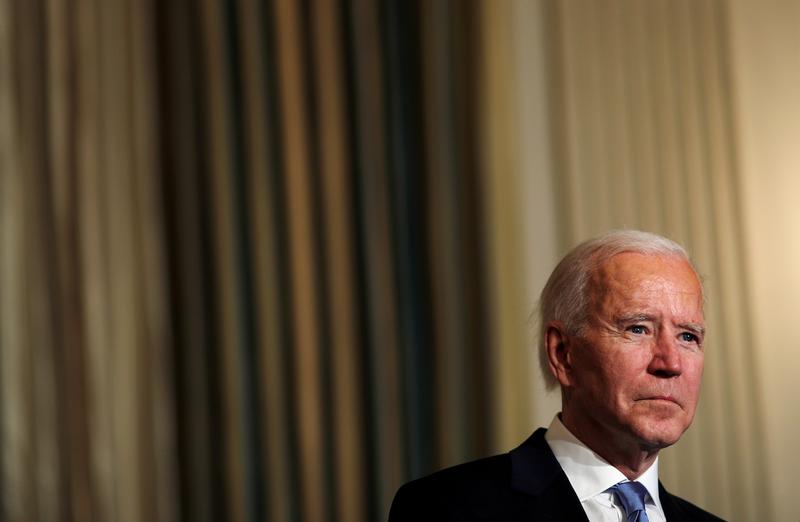 BENGALURU (Reuters) – U.S. President Joe Biden’s proposed fiscal package will boost the coronavirus-hit economy significantly, according to a majority of economists in a Reuters poll, and they expect it to return to its pre-COVID-19 size within a year.

Biden has outlined a $1.9 trillion stimulus package proposal to jump-start the world’s largest economy, which has been at the epicenter of the COVID-19 pandemic having lost over 400,000 lives, fueling optimism and sending Wall Street stocks to record highs on Thursday.

Hopes for an upswing in U.S. economic growth, helped by the huge stimulus plan, was reflected in the Jan. 19-22 Reuters poll of more 100 economists.

In response to an additional question, over 90%, or 42 of 46 economists, said the planned fiscal stimulus would boost the economy significantly.

“There are crosswinds to begin 2021 as fiscal stimulus helps to offset the virus and targeted lockdowns. The vaccine rollout will neutralize the latter over the course of the year,” said Michelle Meyer, U.S. economist at Bank of America Securities.

“And upside risks to our…growth forecast are building if the Democrat-controlled government can pass additional stimulus. The high level of virus cases is extremely disheartening but the more that the virus weighs on growth, the more likely that stimulus will be passed.”

For a Reuters poll graphic on the U.S. economic outlook:

The U.S. economy, which recovered at an annualized pace of 33.4% in the third quarter last year from a record slump of 31.4% in the second, grew 4.4% in the final three months of the year, the poll suggested.

Growth was expected to slow to 2.3% in the current quarter – marking the weakest prediction for the period since a poll in February 2020 – amid renewed restrictions.

For a graphic on Reuters Poll – U.S. economy and Fed monetary policy – January 2021:

Nearly 90%, or 49 of 56 economists, who expressed a view said that the U.S. economy would reach its pre-COVID-19 levels within a year, including 16 who expected it to do so within six months.

“Even without the stimulus package, we had already thought the economy would get back to pre-COVID levels by the middle of this year,” said Jacob Oubina, senior U.S. economist at RBC Capital Markets.

“With the new stimulus package there will be more direct money in people’s pockets, easily boosting the economy, provided a vaccine rollout progresses in a constructive manner.”

But unemployment was not predicted to fall below its pre-pandemic levels of around 3.5% until 2024 at least.

When asked what was more likely for inflation this year, only one said it would ease. The other 40 economists were almost evenly split between “a significant pickup” and price pressures remaining “about the same as last year.”

Still, the core Personal Consumption Expenditures (PCE) price index – the Federal Reserve’s preferred inflation gauge – was forecast to average below the target of 2% on an annual basis until 2024 at least, prompting the central bank to keep interest rates unchanged near zero over the forecast horizon.

“I don’t think it will be an increase in underlying (inflation) trend, it is sort of a rebound in prices that have been depressed during the pandemic,” said Scott Brown, chief economist at Raymond James.

(For other stories from the Reuters global long-term economic outlook polls package:)

The elder brother, 26-year-old Mads Moeller, had swastikas tattooed on his leg, but a witness denied in court that he was racist. The prosecutor...
Read more
Cryptocurrencies

App startups that offer trading, such as Revolut, eToro, and Luno, are seeing a boom in demand for cryptocurrencies on their platforms amid a...
Read more
Stock

The COVID-19 pandemic has upended the U.S. economy by forcing restaurants and stores to close and keeping Americans stuck at home. But the crisis is...
Read more
Cryptocurrencies

Bitcoin prices on Sunday were approaching a psychological milestone around $50,000. The weekend move pushed the world’s No. 1 digital asset to a...
Read more
Cryptocurrencies

Bitcoin tumbles by more than $2,000 as cryptocurrency bulls cash in on this month’s stellar run – Business Insider

Reuters/Lucas Jackson Bitcoin fell over 10% on Thursday as cryptocurrency traders cashed in on their Bitcoin holdings that have gained 20% in...
Read more

Remarks by President Trump on the Economy – Whitehouse.gov