Editor’s note: This is the third of a multi-part farewell series by retiring Chronicle staff writer David Barron. The first part covered changes in Houston sports media through the years; the second looked at local sports radio’s future and the third examined how the pandemic has affected Houston teams’ broadcasters and media departments.

Jason Bristol at KHOU (Channel 11) is the exception, but the CBS affiliate has a local product in Daniel Gotera, and Matt Musil has been on the job since 1980, so he has as much institutional knowledge as anyone imaginable in this market.

Local knowledge is a plus in these days of hyper-local coverage and expanding news holes at stations where newscasts now begin at 4 a.m. and continue almost unceasingly until 10:35 p.m.

I was curious to learn whether sports airtime had been reduced at the local stations in recent months, given the presidential election and the ongoing pandemic. Based on a recent random sweep of the local stations and observations from Channel 2’s McIlvoy, it would appear that sports continues to hold firm in the pecking order most nights.

“Except for early on, it really hasn’t been a factor,” McIlvoy said. “We’re getting our time and in some cases, we get more than we had before.

Staffing levels have been affected in some cases. Bob Slovak left Channel 13 last fall as part of cutbacks associated with the pandemic, and Berman remains a one-man band at Channel 26, albeit with the help of camera people and a producer.

On Wednesday, a busy news day that included the impeachment of Donald Trump and news about a local police officer identified as having taken part in the U.S. Capitol riot, stations devoted anywhere from 2½ to 5 minutes on sports, most of that devoted to the James Harden trade.

All the local stations continue to focus on high school sports along with the pros, and Channel 2 and Channel 11 retain their 30-minute Sunday night feature shows, joined by a Channel 13 show during Texans season, to offer expanded feature coverage.

“You do have to be creative in terms of finding stories and getting access,” McIlvoy said. “We’re still able to tell feature stories during the week, but they’re shorter, and we leave the long-form things until the Sunday night show. What we’re trying to do is tell more human interest stories and get a different look and feel.”

I first employed that phrase to encompass the-odds-and-ends portion of this feature back in 1997. Back then, of course, it was VCRs in an era before videotape gave way to digital video recorders.

As I wind up 24 years of weekly reporting on sports media in Houston, I have a library full of memories of great games I’ve seen or covered or watched, ranging from high schools to every Super Bowl that is available on videotape or disc. Maybe someday we’ll get a good look at the elusive Super Bowl I tape and somebody will find a copy of Super Bowl II.

Don’t ask me why — it seemed like a good idea at the time — but I also have all the prime-time Olympic coverage, and most of the daily coverage as well, from each Olympics beginning in 2000, the first of seven Olympics that I had the good fortune to cover.

I was always a big fan of NFL Films, so I’ve got hundreds of long- and short-form documentaries — the 1999 to 2003 series “Lost Treasures of NFL Films” may be my favorite — from that great company founded by Ed and Steve Sabol. I will always treasure memories of my conversations with Steve and with the great musical composer Sam Spence.

There are dozens and dozens of other great documentaries, among them the entire run of 200-plus editions of ESPN’s “SportsCentury,” the expanded “30 for 30” series, the outstanding “Sports of the 20th Century” series from HBO Sports and the collected works of the great Olympic filmmaker Bud Greenspan.

The very best, though, may be one of the first items I added to the collection. For the 1998 Nagano Winter Olympics, “60 Minutes” producer Draggan Mihailovich and anchor Bob Simon compiled a 30-minute documentary called “The Great Zamperini,” focused on the Olympic athlete and World War II prisoner of war Louis Zamperini.

Zamperini’s story later became the subject of the book and film “Unbroken,” but this was the first time I had heard about his story. It continues to inspire today after repeated viewings, and you can find it here.

As I wind down from full-time to part-time writing, maybe there will be time to reflect and rewatch some of these great films. And there will be more to come. HBO’s Tiger Woods two-parter bears watching, and ESPN no doubt has projects in the pipeline that will be award worthy.

I’ve been so fortunate to be able to watch and write about the great programs, the great games and the great announcers. I hope to continue doing so on a limited basis, as circumstances allow, as we move from DVRs to cloud servers to whatever storage mechanism awaits in our digital futures. 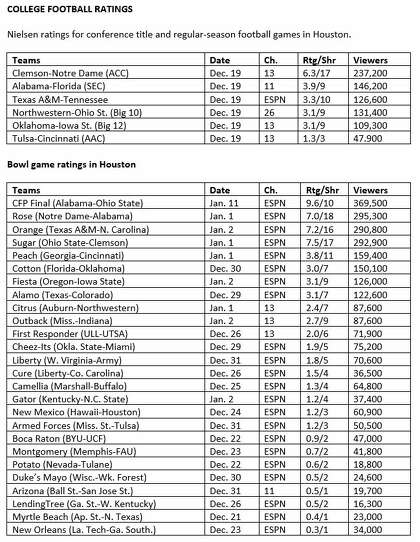 The United States now marks a wrenching 300,000 deaths from COVID-19. And the once-unthinkable threshold is expected to rise, as experts fear the country is hurtling nonstop toward the...
Read more
Business

Cristiano Ronaldo might have failed in the Champions League this week but 14-years-ago today he impressed against the whole continent! (Kind of)It wasn't always...
Read more
Business

Latino businesses have been hit hard by Covid-19. Here are tools for help. – NBC News

The Covid-19 crisis has hit Latino small businesses particularly hard, including not being able to access PPP funding at a similar rate to other...
Read more
USA

Our commenting has been temporarily disabled. You are solely responsible for your comments and by using TribLive.com you agree to our Terms of Service. We moderate comments....
Read more
World News

Price of cryptocurrencies, especially bitcoins have almost trebled in 2020. This trailblazing performance in a short period has again brought cryptocurrencies in the limelight,...
Read more
Economy

How the Fed took control of the economy – Axios

To brace the U.S. economy and stave off another Great Depression, the Federal Reserve has taken control of it through unprecedented intervention — manipulating...
Read more
World News