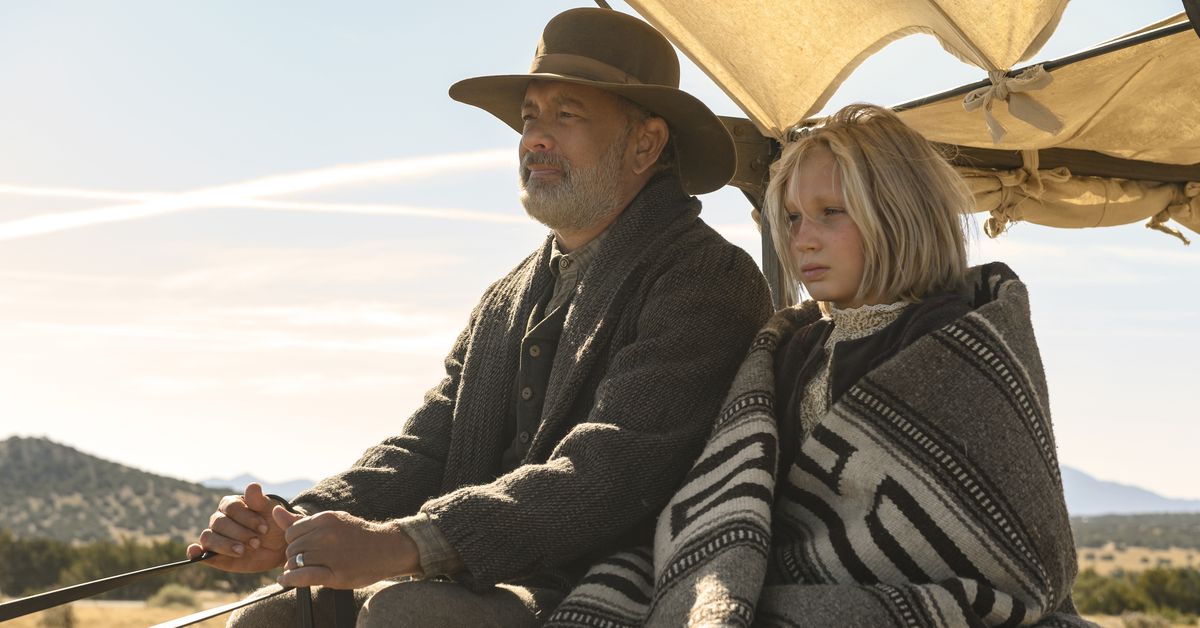 There was an era — and that era was the 1970s — when a Time magazine poll named news anchor Walter Cronkite as “the most trusted man in America,” and Watergate investigative heroes Bob Woodward and Carl Bernstein were largely responsible for the occupation of journalist regularly charting near the top of the rankings of most admired professions in the USA. (Even today, 99% of mainstream American journalists remain committed to delivering the truth, despite the delusional cries of “Fake News!” popularized by certain public figures.)

If we were to conduct a poll of the most trusted actors in America, I’d argue Tom Hanks would be near the top of that list — and Hanks is perfectly cast as an 1870 news anchor of sorts in Paul Greengrass’ gritty and visceral and deeply resonant “News of the World,” a rough-and-tumble Texas road-trip movie that plays like a hybrid of the John Wayne movies “The Searchers” and “True Grit” and even reminded me a little of George Clooney’s recent epic “The Midnight Sky.”

Hanks re-teams with his “Captain Phillips” director to play a very different kind of captain — one Capt. Jefferson Kyle Kidd, a Civil War veteran who fought for the Confederate Infantry and sustained injuries both external and internal, and has now carved out a unique way of making a living, i.e., he rides from town to town in the raw and rough state of Texas (where many haven’t fully accepted losing the war and racially motivated violence is lurking around every corner) and literally reads the news of the world to the townsfolk for 10 cents a head, bringing them the latest developments from near and afar, whether it be an outbreak of meningitis, a coal mine tragedy or a deadly ferry accident. (Hanks is such an all-American actor — and yet this is his first Western.)

Jefferson is a stoic man, a widower who keeps to himself, but his solitary, nomad life is upended when he happens across a 10-year-old girl named Johanna (Helena Zengel), who has spent much of her life as a captive of the Kiowa tribe and has been left with the authorities after her captors were killed. Jefferson takes on the responsibility of transporting the girl to her only surviving relatives in the far-off hill country of Castroville, and thus begins a long and arduous journey, made all the more difficult because Johanna is deeply resentful of this strange man, speaks not a word of English and doesn’t even understand the concept of a knife and fork. There’s a lot of learning to be had along the way.

With the lush and moving score by James Newton Howard setting the epic tone and director of photography Dariusz Wolski providing striking and stark visuals (New Mexico stands in for Texas), “News of the World” has a rather deliberate pace that allows for the inevitable bonding between the world-weary and tough but goodhearted Jefferson and the wild and rebellious Helena, who comes to trust perhaps the first adult who has ever shown her compassion and kindness. Jefferson has committed terrible atrocities in his life and has known great tragedy, and Helena’s first 10 years on this Earth have been filled with horror and sorrow, and though they don’t realize it at first, each is the other’s last best hope for salvation.

We know these two will run into nearly insurmountable obstacles along the way, and director Greengrass does his usual superb job of amping up the suspense, whether Jefferson is dealing with a racist power broker named Mr. Farley (Thomas Francis Murphy) in one town who forces Jefferson to read Fake News propaganda, or engaged in a prolonged and deadly shootout with a band of nasty outlaws led by Michael Angelo Covino’s suitably hiss-worthy Almay, who wants to capture Johanna and turn her into a child prostitute. (The very dimes Jefferson charges to read the news of the world come in extremely handy during this confrontation, and I’ll leave it at that.)

Director Greengrass is a master at combining sympathetic character studies with docudrama, staccato action sequences in films ranging from his Matt Damon “Bourne” trilogy to nonfiction-based films such as “Green Zone” and “United 93” and the aforementioned “Captain Phillips,” and he’s at the top of his game here in this expertly crafted adaptation of the 2016 novel by Paulette Jiles. “News of the World” works at the highest levels as a story of two lost souls who find one another, and as a crackling good, blood-spattered Western.

The top entertainment stories, features and must-read reviews, sent to you weekly.

DODGE CITY -- In the midst of a worsening pandemic, as coronavirus cases climbed, elected leaders in a former frontier town famous for its...
Read more
Economy

Green jobs could light the way in a post-pandemic economy – Channel3000.com – WISC-TV3

Before the COVID-19 crisis, clean energy jobs were growing one and a half times faster than overall employment in Wisconsin. January 3,...
Read more

Facebook hopes the cryptocurrency it backs will launch in 2021, top exec says – CNBC

WASHINGTON—President-elect Joe Biden’s transition team is outlining plans to reverse many of President Trump’s policies during the first 10 days of the new administration,...
Read more

ANKARA Crude oil prices increased on Thursday on positive economic recovery signs in the US and with a large draw on the country’s fuel...
Read more
Sports

Effects of coronavirus outbreak on sports around world – 41 NBC News

Listen to the content of this post: The Latest on the effects of...
Read more
World News

Representative Ilhan Omar tried to head off a growing furor over a tweet suggesting she equated the U.S. and Israel with the Taliban and...
Read more

Analysis: Can Joe Biden recreate the U.S. economy he grew up with? – Reuters

By Howard Schneider6 Min ReadWASHINGTON (Reuters) - Joe Biden will almost certainly be the last U.S. president born as a member of the “silent...
Read more
Sports

N.J. high school sports to reopen for parents to be spectators at games, sources say – NJ.com

Gov. Phil Murphy is set to announce that a limited number of parents in New Jersey will be allowed to watch their children play...
Read more
World News

Israel to end curbs – as it happened – The Guardian

This blog is now closed. Australia’s lack of clear triage protocols more than a year into the Covid-19 pandemic means clinicians...
Read more