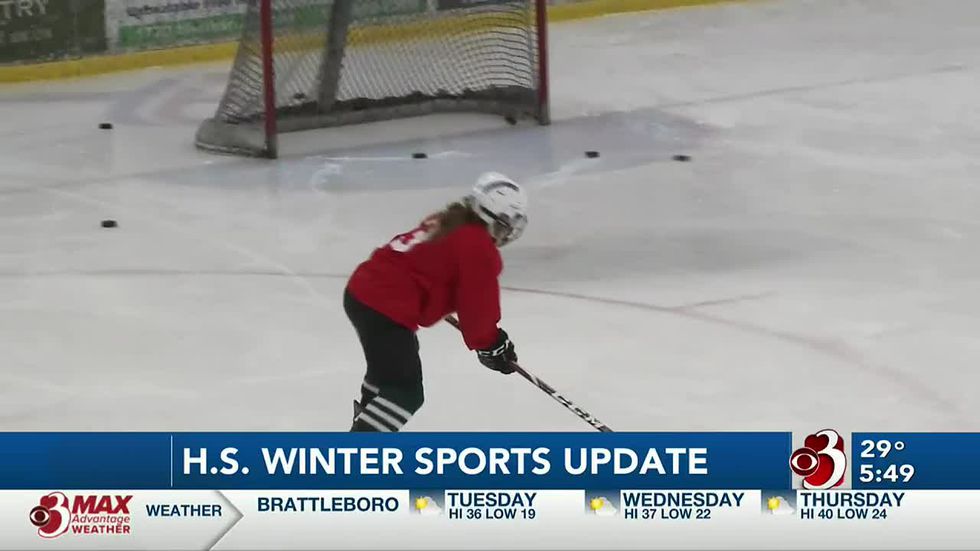 The start of the winter season was delayed four weeks, from late November, to just after Christmas. when Governor Phil Scott gave the OK for teams to hold workouts. Those workouts allowed for individual skills, strength and conditioning training, but no contact, and required physical distancing and mask wearing.

Some schools begin immediately, others waited until students returned from winter break. The state’s largest school, Essex, was set to begin on Monday, but the district switched to remote learning for two days after a positive COVID test within the school community. Essex athletic director Pat Merriam told Channel Three Sports he hopes practices can begin on Wednesday.

Bob Johnson of the Vermont Principals’ Association says that even once the Governor and state health officials give permission for teams to full practices and scrimmages, teams would need to hold ten practices before they could begin competitions against other schools, so the best possible scenario has a start date for game now looking like late January or the first week of February.

Johnson says one thing that has stood out to him about the start of the winter season so far is that some schools are telling him that they have had fewer students come out for their teams than they would in a typical year.

Johnson says that, unlike the fall and spring where almost all sports are played outdoors, the fact that most of the winter sports take place indoors, and will still have masking wearing requirements and other restrictions that would impact the excitement and atmosphere of those sports, could be a factor in those lower numbers choosing to participate.

Now, not all of the high school winter sports are held indoors. The VPA offers three outdoor winter sports, alpine skiing, cross-country skiing and snowboarding. They are also all individual sports, where social distancing measures could be established for both practices and competitions.

Johnson says the VPA feels those sports could be moving forward with their seasons, and in fact, those sports are seeing a strong turnout this season, but that state is insisting that all high school winter sports follow the same timetable for when they will be allowed to move forward.

“We haven’t gotten any further on that discussion at all, which is unfortunate, because the (outdoor) winter teams are seeing probably record numbers coming out for their teams because they could do something.”, says Johnson. “Even though it’s only skills and drills cross, the country team can you still get out there and they can ski. So we were a little surprised with it, but at this point right now they have to wait just like everybody else does.”

MANCHESTER UNITED have the most sustainable squad in Europe.That is the headline news from a study which suggests United should be challenging for glory...
Read more
Business

In 2020, life went online. Between 2019 and 2020, phone usage jumped from three hours to four hours per day, according to App...
Read more
Cryptocurrencies

The leader in blockchain news, CoinDesk is a media outlet that strives for the highest journalistic standards and abides by a strict set of...
Read more

ROCKFORD (WREX) — The sports world shut down for some of 2020, with some seasons not even getting played due to COVID-19. But there...
Read more
Economy

The coronavirus pandemic and its economic fallout will help China rise past the US to become the world’s largest economy, a new report shows. Beijing...
Read more
Cryptocurrencies

A string of military figures on the list of Iranian presidential hopefuls is stirring unease over a possible militarisation of the Islamic republic's politics. ...
Read more
Cryptocurrencies

Bitcoin, Ethereum, Dogecoin, Tether, Polkadot. With so many crypto assets grabbing headlines these days, it can be hard to keep them all straight.Here we...
Read more
World News

Covid-19: The U.S. Has Its Own New Worrisome Variants – The New York Times

Here’s what you need to know:Genomic sequencing can detect and track virus variants, but the United States is sequencing relatively few coronavirus test samples....
Read more