The best cryptocurrencies… The mere thought of such a list is enough to make many of the best investors snicker. And then dismiss the topic altogether.

Investing rock star Warren Buffett has called Bitcoin rat poison, a mirage and worthless. He also noted that cryptos are basically worthless because “they don’t produce anything.”

Carl Icahn has gone on record describing cryptocurrencies as “ridiculous.” But at least he also noted that he just might be too old to understand them.

Dallas mavericks’ owner Mark Cuban has said that he’d rather have bananas than Bitcoin… After all, at least you can you can eat bananas. But you could also trade a single Bitcoin for more than 150,000 bananas. So that might not be the sagest advice Mr. Shark Tank has imparted.

Then there’s JPMorgan Chase CEO Jamie Dimon. He’s referred to digital currency as a “fraud.” He also said that people stupid enough to buy it will pay the price for it in the future. He was close… It turns out Bitcoin investors have been paid a price. And a substantial one at that.

Even “the fools” that jumped in on Bitcoin during its 2017 highs have seen a return on their investment. Even if it did take a few years. And for those that waited for the 2017 crypto frenzy to die down have been even luckier.

Here’s a straightforward chart from Coindesk showing the past year of Bitcoin’s value (perceived or otherwise, Mr. Buffett). 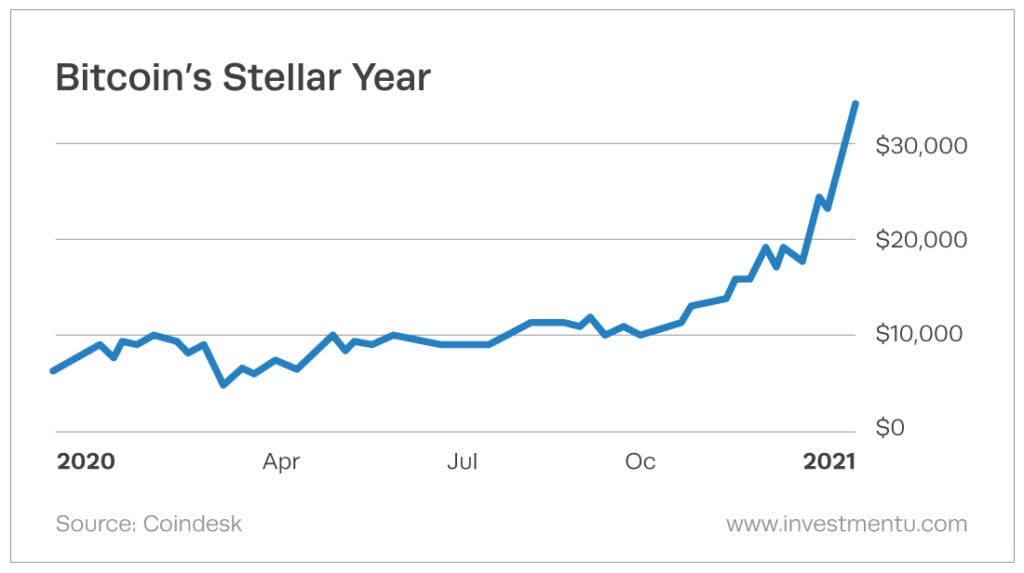 So, without further ado, here are…

The Best Cryptocurrencies to Invest In 2021

There are close to 6,000 different cryptocurrencies out there. And a whole lot of them aren’t worth the space they take on your hard drive. Take internet darling Dogecoin for instance. This alt coin was created in 2013 and just recently cracked into uncharted territory when it was worth (*checks notes*) an entire cent.

But this also helps explain part of the draw of cryptocurrencies. There are plenty of folks out there that threw a couple hundred bucks at it a while back when it was worth a fraction of a cent. In March of 2020, a single Dogecoin was worth $0.001774.

Fast forward less than a year and a buy-and-hold strategy (or hodl, if you will) would have brought in gains upwards of 460%. That’s a solid return no matter what kind of investment it is. Which brings us to the best cryptocurrencies to pick up and hodl for the foreseeable future.

Sure, it’s the most obvious one. But that’s for good reason. Afterall, there’s something to be said for the cryptocurrency that started it all. With a market cap of more than $600 billion, it’s without a doubt the strongest cryptocurrency out there.

But its steep price keeps many potential investors on the sideline. But that needn’t be the case. I happened to have just picked up $17 worth of Bitcoin in my Robinhood account.

Sure, that only scored me a quantity of 0.00046577 a Bitcoin. But that small holding stills grants me exposure to the most prominent and one of the best cryptocurrencies out there.

For every Batman, there’s a Robin. And while Bitcoin rules the crypto roost, Ethereum is a potent second fiddle with lots of upside potential. Like Bitcoin, Ethereum is seen by enthusiasts as an alternative to fiat currency. But its blockchain technology (AKA database) is more focused on decentralized applications than digital currency. But that hasn’t slowed this alt coin’s rapid rise in value.

While operating as a software platform, it enables decentralized applications to be built and run without fraud or third-party interference (take that Apple and Google). The applications run on its platform operate via its own cryptographic token. That makes this crypto a sought-after one by developers looking to develop and run apps within this network.

Ethereum also happens to one of the few cryptos that can be used on exchanges to buy other cryptocurrencies. While its market cap pales in comparison to Bitcoin’s, it has slowly been making headway. And with momentum on its side, Ethereum is an easy pick for one of the best cryptocurrencies available.

Founded by former Google employee, Charlie Lee, this crypto shares a lot of similarities with its big brother, Bitcoin. It was developed with the intention of improved transaction times (roughly 2.5 minutes) and lower transaction fees. It has a substantially faster block generation rate than Bitcoin. And unlike most cryptos, the list of merchants than accept Litecoin is growing rapidly.

As Litecoin usage becomes more commonplace, it stands to reason that its value will only grow. And that makes this one of the best cryptocurrencies out there… Whether you want to hold it and watch it grow or use it as a form of payment.

Bitcoin Cash will forever hold a special place in the history of cryptocurrency. It is one of the earliest hard forks from Bitcoin. And thus far, the most successful one.

Because cryptos are decentralized in nature, when there is debate about possible issues to its underlying code, no changes can be made without a consensus. If miners and developers can’t come to an agreement, the digital currency can be split – or forked.

In this case, there was a heated debate about Bitcoin’s scalability. Bitcoin remained the same. And Bitcoin cash was created with updates to its code. This code change increased the size of blocks from one megabyte to eight. This allowed for much faster transaction times.

Although it still has some catching up to do with some of its competitors, Bitcoin Cash’s scalability could allow to accrue value even faster than much of the competition.

Binance is the largest cryptocurrency exchange in the world based on volume. And it’s not even close. Binance Coin, naturally, is the official token of the Binance exchange. It allows users to trade in other cryptos with seamless efficiency. Binance Coin can also simplify transaction fees and even pay for goods and services. There is even a Binance Card available now. This allows folks to pay for things just like they would with their regular credit card. The only difference is they load up the card with Bitcoin or Binance Coin and pay for groceries or a new crypto hard wallet.

Based on usability alone, Binance Coin is easily one of the best cryptocurrencies available. And as of right now, it’s also the most affordable.

The Not-So-Great Cryptocurrencies To Date

Two of the biggest cryptos out there that didn’t make this list missed it for two big reasons. One is under investigation. The other doesn’t exist yet.

Ripple (XRP) has been one of the most widely known cryptos for years. It’s had similar ups and downs in value just like the others. But while many are surging upward, Ripple is floundering in a big way. At the end of 2020, Ripple took a big hit and it’s uncertain how long the damage will last. But in all likelihood, it’ll be for a while.

The Securities and Exchange Commission (SEC) filed suit against Ripple Labs Inc and two of its executives at the end of 2020. The allegations are that $1.3 billion were raised through an unregistered digital asset security offering. That’s a big no-no. And the price of Ripple has dropped dramatically. Will it return to its former heights? That remains to be seen. But for now, investors should steer clear. Or at the very least be extremely weary.

Then there’s Diem (formerly known as Libra). It may be the most hyped-up crypto ever. Heck, it’s responsible for Congress trying to wrap its collective brain around what exactly cryptocurrency is. While it’s no shocker that our politicians are still largely in the dark, the opportunity allowed Facebook’s future cryptocurrency lots of time in the spotlight. And when it’s released sometime this year, it wouldn’t be too shocking if name recognition rewards early adopters.

There’s a lot of competition out there in the world of cryptos. And volatility is a characteristic of many of them. That’s why this list of the best cryptocurrencies is mostly intended for the buy and hold crowd. With maybe the exception of Binance Coin – simply due to its convenience – ignoring daily and weekly price swings might be in your best interest.

If you’re looking for faster opportunities… And the chance to get in and out of altcoins a little faster and turn a profit, we suggest signing up for the Manward Press e-letter. This will give you easy access to a whole new world of investing and the chance to discover fast-moving cryptocurrencies with tons of upside potential.

Why Web 3.0 Tokens Might Be the Next Hot Trade in Cryptocurrencies – CoinDesk – CoinDesk

Medical World News® Inside the Practice: CancerNetwork® and Duke Herrell on a Novel Suturing Technique for Transurethral Anastomosis – Cancer Network

May 4, 2021CancerNetwork® shares its latest investigation into novel practices for rendering surgical management of prostate cancer from experts at Vanderbilt Institute for Surgery...
Read more

STOCKHOLM, May 17, 2021 /PRNewswire/ -- LeoVegas has entered into an agreement to launch the LeoVegas brand in New Jersey, USA. The State of...
Read more
Business

The Week in Business: Prices Are Rising on Cars, Groceries and Even Burritos – The New York Times

Good morning and happy Sunday. Here’s what you need to know in business and tech news for the week ahead. — Charlotte CowlesCredit...Giacomo BagnaraWhat’s...
Read more
Sports

CARTERVILLE (WSIL) -- Let's get you caught up on local sports scores from around the area for Thursday, April 22nd. Baseball: Massac County 3,...
Read more

USA TODAY is keeping track of the news surrounding COVID-19 as a pair of vaccines join the U.S. fight against a virus that has...
Read more
Sports

What are the new Olympic sports for 2021 Tokyo Games? – The Washington Post

Skateboarding: The men’s street competition will be held July 25, followed by the women’s on July 26. In the street discipline, athletes navigate a...
Read more
USA

The uniforms the U.S. men's and women's golf teams will wear at the Tokyo Summer Olympics have been ... unveiled....
Read more

The latest in the NBA playoffs, the NFL's decision to end the practice of "race norming," and an upcoming boxing match between former...
Read more
Cryptocurrencies

Most major crypto assets are starting the day off with a dip. Bitcoin shed off 6.51% over the past 24 hours, confirming predictions of a...
Read more