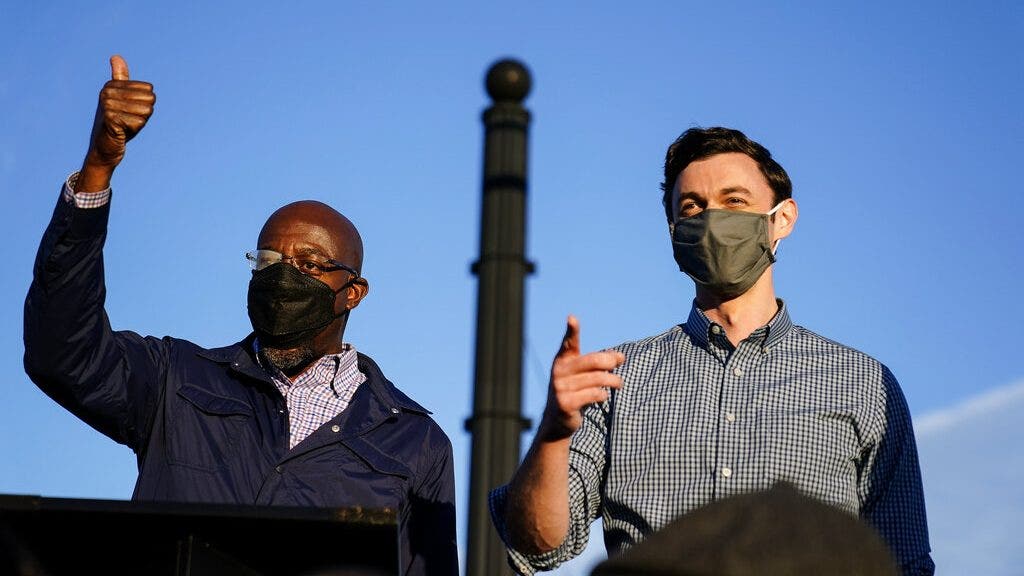 According to multiple media outlets, Democratic challenger Raphael Warnock has defeated Republican incumbent Sen. Kelly Loeffler. Jon Ossoff has also officially been projected the winner in his race against incumbent Sen. David Perdue. These results give Democrats 50 seats in the Senate and the majority because Vice President-elect Kamala Harris can break all ties.

As a result, Democrats have a governing trifecta that will allow them to implement their anti-business agenda of massive tax hikes, a health care public option, and energy, environmental, and labor regulations. Small businesses, which have been decimated by the pandemic yet were optimistic about 2021, will bear the brunt of the fallout.

According to the Tax Foundation, President-elect Joe Biden’s plans to increase taxes by $3.3 trillion, including raising rates on businesses structured as corporations by 33 percent.

He also plans to raise taxes on businesses structured as pass-throughs. Biden’s plan to eliminate the income cap on payroll tax will make employment, hiring, and wage increases far more costly at the worst possible time.

One-party rule means Democrats will implement the Congressional Review Act, which allows them to nullify the Trump administration’s recent executive actions. These include pro-business measures such as tip-pooling and the relaxing or clarifying of numerous energy and environmental regulations.

Senate control will give Biden an easy time getting even his most radical Cabinet picks confirmed. These include Neera Tanden, the head of the far-left Center for American Progress, to run the Office of Management and Budget, and Xavier Becerra, California’s Secretary of State, to lead Health and Human Services.

Such Cabinet picks will implement an anti-business regulatory regime that will make former President Barack Obama’s look mild by comparison.

To pass their more radical legislative agenda, Senate Democrats will need to eliminate the legislative filibuster that requires 60 votes to pass laws. Incoming Senate Majority Chuck Schumer has already admitted that he is willing to break with Senate tradition to take this step. “Now we take Georgia,” he said ominously in November, “then we change America.”

Without filibuster protections, the Democratic Senate can pass two big-ticket Democratic priorities: the Green New Deal (GND) and a health care public option. Both of these policies would significantly hurt small businesses.

Through its labyrinth of green energy mandates, the GND would dramatically raise energy costs, which are one of small firms’ biggest inputs. For a vision of the future under the GND, look to California, which has $4 a gallon gas and some of the nation’s highest electricity costs (along with recurring blackouts) due to its green taxes and regulations.

A health care public option will make it very difficult for employers who provide health coverage because they’ll have to compete with a “free” government option that entices young and healthy workers. Without these plan participants to offset the costs of older and sicker workers, healthcare costs for businesses will rise.

Democrats will also look to pass labor regulations such as a national $15 national entry-level wage and overtime and “joint-employer” regulations. These costly rules will put some low-margin employers out of business, including those that offer employment opportunities in bad parts of town.

It’s going to be another challenging year for entrepreneurs. Just as they are about to put the pandemic in their rearview mirror, they will confront another massive roadblock in the form of Democrats’ big-government agenda. Yet if anyone can emerge from this one-two punch, it’s American small businesses.

Alfredo Ortiz is the president and CEO of the Job Creators Network.

One point separates third-placed Chelsea and fifth-placed Leicester City with one game to goIt's two from three for Champions League places as the Premier...
Read more

BELFAST, Northern Ireland (March 28, 2021) – A goal in the first half from Gio Reyna and a penalty kick score in the second...
Read more
World News

Schoolchildren, along with a number of business and political figures, have been kidnapped at various times and released after a ransom was paid -...
Read more

Why is the price of Bitcoin and other cryptocurrencies falling? – CBS News

The price of Bitcoin fell as much as 29% Wednesday after the China Banking Association warned member banks of risks associated with digital currencies....
Read more
Business

3 ways to make social impact run through your business, not around it – The Next Web

Sherry will be hosting a session on this topic at Boost on April 15th — along with Uber’s Eugenie Teasley. Secure your ticket now. Until...
Read more
Stock

Why India needs bitcoin and other cryptocurrencies? – The Financial Express

China, which has allowed cryptocurrency exchanges to flourish, is also the home of the largest number of blockchain start-ups.In the last fortnight, Bitcoin and...
Read more
Business

Just two weeks after getting the green light to reopen Amano at the end of May, Ondrej Rakosnik was forced to pull the shutters...
Read more