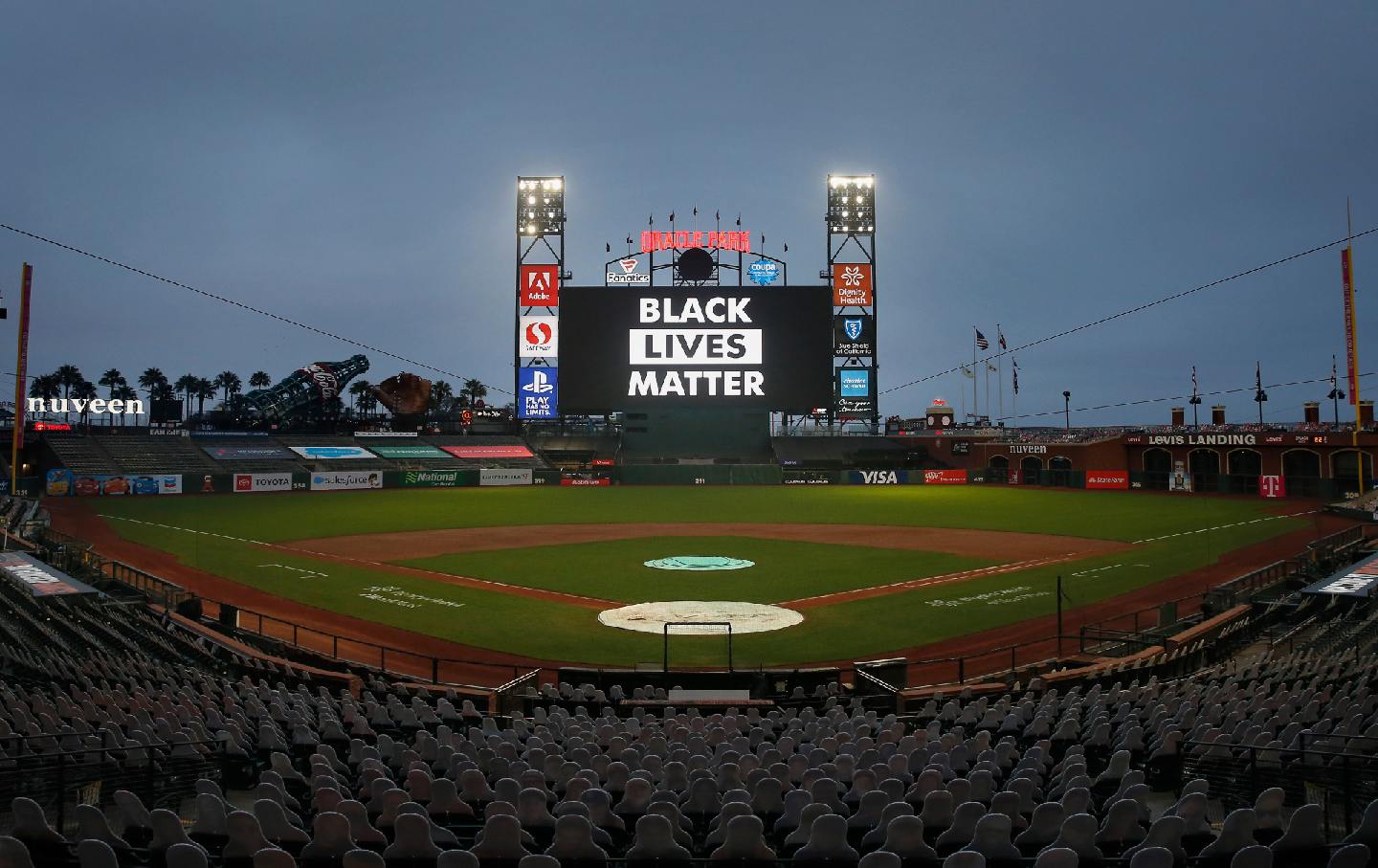 The Nation is reader supported: Chip in $10 or more to help us continue to write about the issues that matter.

The Nation is reader supported: Chip in $10 or more to help us continue to write about the issues that matter.

Did you know you can support The Nation by drinking wine?

This cursed year of 2020 should be remembered as the time when sports was put in a meat grinder, mixed with all manner of offal and served to us as hope.

Professional sports, we were told, represented a “return to normalcy” in a time that was anything but normal. “The games must go on” was the mantra, with athletes presented as “essential workers” by sports leagues and colleges desperate for their billion-dollar fix of television cash.

Think about how quickly sports were shut down in March after Utah Jazz center Rudy Gobert tested positive for Covid-19, sending a warning to the country that tough times were ahead. Then think about how in a matter of weeks, sports were repackaged and games resumed for our collective distraction.

NBA and WNBA players were sent to live in a hermetically sealed bubble, locked away from their families and the outside world. College players in the revenue-producing sports were involuntary guests of honor at an infection frat party, with no pay, no semblance of union protections, and no voice. Instead, they were put on the field to keep the rickety financial tentpole of college football erect on the neoliberal campus.

Major League Baseball gave us tradition freaks a Dodgers World Series victory, only to have it marred when third baseman Justin Turner took the field after the game to celebrate while knowingly having Covid and proceeded to embrace everyone within spit-bubble distance, including his cancer-survivor manager, Dave Roberts.

Think of the games played in front of empty stands, giving an I Am Legend, post-apocalyptic field to the contest. What a bizarre scene, as coaches wore ill-fitting masks, flapping in the breeze, as announcers spoke to each other through plexiglass, again pushing an illusion of safety while players sweated and expectorated all over one another on the field and court. At least the Thunderdome had fans.

Sports, as scribe Jane McManus reminded us early in the year, is a sign of a functioning society. Our society is profoundly dysfunctional, ripped apart by disease and inflamed by racism, and sports reflected that. Far from being a respite of hope, it was a sclerotic reminder that so many of us lived this year either in a state of isolating agony or abject and dangerous denial. They served us slop and called it hope, which provokes the question about whether that’s crueler than serving nothing at all. Some of us believe slop is superior to starvation, yet 47 percent of the American public said to the Marist pollsters that they were watching less sports than a year ago, showing that many pushed away their plates.

Meanwhile a new crypto-fascist strain of sportswriting appeared to blame the low ratings on Black athletes. The hate-tract analysis—always presented without facts—was that ratings were down not because of Covid’s sucking the life out of our society but because “fans” (read “white fans”) were repulsed by Black and white players’ speaking out in solidarity with Black and brown people after the police murder of George Floyd. This explanation failed to account for why ratings were down so dramatically for golf and NASCAR, sports not exactly delivering sermons on the mount. It was just more profitable poison to pour into a body politic barely able to stand.

The players, however, withstood the avalanche of hate and did more than send tweets with hashtags, amplifying the latest atrocity. In a sports world built this year on an altar of false hope, the players gave us something real. The very same week that the Republicans used their national convention to bleat about “law and order” and “Black Lives Matter anarchists burning down our cities,” the players went on strike for Black lives in August, after the police shooting of Jacob Blake in Kenosha, Wis.

These athletes changed the conversation, reminding all of us that the problem is not protesters but police violence. They also brought the question of the strike into the struggle for Black Lives and gave many of us a sense of hope. Real hope, completely unprocessed and unfiltered. It was hope not staged by league marketeers hoping to attract a young and diverse fan base. It was real struggle—substantial, authentic—and it sparked rage in all the right people. To see it cascade over the course of days from basketball, to baseball, to soccer, to tennis was to see labor at long last flex its power against state violence.

Yes, we don’t have a functioning society at the moment. But maybe—just maybe—the actions of athletes as workers, played a vital role in something more important than just merely a return to normal. Sports didn’t deliver normalcy in 2020. But they did nudge us toward justice.

Jobless claims are near the lowest levels since the pandemic struck last spring in the midst of signs of a broader economic recovery. Economists...
Read more
European Premier League

Photo by Carlos Rodrigues/Getty ImagesBenfica have rejected a £25 million bid from the Premier League for Goncalo Ramos with Bruno Lage’s Wolverhampton Wanderers side...
Read more
Economy

China ended the Year of Covid in many ways stronger than it started, accelerating its movement toward the center of a global economy long...
Read more

U.S. stock futures ticked higher Tuesday, pointing to muted gains at the opening bell ahead of manufacturing data that will give fresh insights into...
Read more
European Premier League

Manchester (United Kingdom) (AFP) – Cristiano Ronaldo surpassed even his own expectations as he delivered on the hype of his return to Old Trafford...
Read more

Story Links TEXARKANA, Ark. – Middle Tennessee will have some ground to make up Tuesday during the second round of the Conference...
Read more
Economy

VENICE, Italy — For some it was a welcome sight, for others, a return to the bad old days.As the first cruise ship since...
Read more

The flags of the U.S. and China.Holger Gogolin | iStock | Getty ImagesBEIJING – The outlook for U.S. businesses in China is improving, whether...
Read more
Business