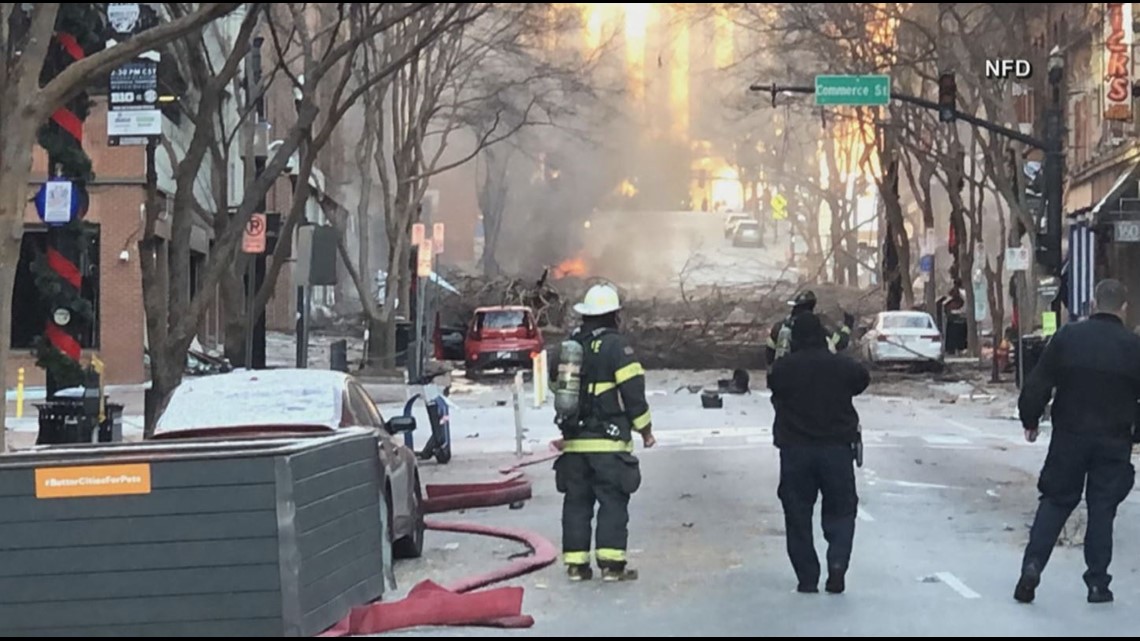 Christmas morning was a break that people had been looking for in a year full of tragedies, but it turned into just the opposite.

NASHVILLE, Tenn. — It was a terrifying Christmas morning before a mystery started unfolding in Nashville as investigators raced to find who was behind an RV explosion that destroyed more than 40 businesses and injured at least three people.

It came with a loud message that played over speakers, warning people to evacuate ahead of the blast at 6:30 a.m. this morning.

10News reporter Amelia Young spoke with people who lost their homes and businesses due to the blast.

Christmas morning was the break people had been looking for in a year full of tragedies, but it turned into just the opposite as devastation hit Nashville once more in 2020.

Malory Luciane was in the middle of it all.

“I saw my wall and my window come into my apartment and I just screamed and called 911,” she said.

Her 2nd Avenue apartment was hit when the explosion when off.

“When you walked out it looked like a warzone,” she said. “There were fires on the side of the street, debris all over. It was insane, glass all over the street.”

She heard what sounded like gunshots around 5 a.m. It got to the point where she began to check on others. She said she texted her neighbor, asking if she was hearing the same thing.

One hour later, her apartment was gone.

Beside her apartment, dozens of businesses were gone too. One of those belonged to Peter Gibson — Pride and Glory Tattoo.

“Speechless really; I can’t even explain it. It’s heartbreaking really,” he said, after finding out his shop was destroyed. “You don’t really prepare for this or think something could happen right in front of your door.”

Gibson wasn’t there when it happened, but when he heard the news he came rushing for it. He said that the shop was his baby and that he poured countless amounts of effort into building it.

The explosion destroyed all his hard work.

“It’s indescribable, just a lot of things going through my head right now,” he said. “I’m just happy everyone is safe.”

Both are still trying to grasp everything that happened.

“It’s unreal. It’s unexplainable. I normally have words for stuff but this is something new,” said Gibson.

They said that their next step was simply taking care of each other.

The FBI has set up tip lines and a $33,000 reward is being offered for information related to the explosion.

The Dow Jones Industrial Average rose on Tuesday, building on its sharp gains from the previous session as a market rotation out of names...
Read more
Business

In Other News, Mysterious Monoliths Keep Appearing All Around the World, With 200 Reported Sightings to Date – artnet News

Monolith mania is showing no signs of abating as the strange sculptures continue to appear around the world. There have been as many as 200...
Read more

Biden will have a long list of economic fixes to make: Experts say these are the top 3 – NBC News

Economists and market analysts say that when President-elect Joe Biden takes the oath of office in January, he will inherit a battered economy. While...
Read more
Stock

LONDON (AP) — Trucks waiting to get out of Britain backed up for miles and people were stranded at airports Monday as countries around...
Read more
Stock

(Sean Williams) What a difference a year can make. At this time last year, uncertainties surrounding the coronavirus had fully gripped the...
Read more
Stock

The Dow Jones Industrial Average rallied on Tuesday, breaking above 30,000 for the first time amid positive vaccine news, hope for a strong economic...
Read more

"I’m a risk player, I take risks. I want to take risks every time and I will take the risk every time," said Bruno...
Read more
World News

Jon Gluyas, Ørsted/Ikon chair in geoenergy, carbon capture and storage at Durham University, adds that the real question is whether it is cost-effective to...
Read more
Economy

Biden’s stimulus may be too big amid economic recovery, should be targeted at those most impacted – CNBC

President Joe Biden signs an executive order after speaking during an event on his administration's Covid-19 response with U.S. Vice President Kamala Harris, on...
Read more