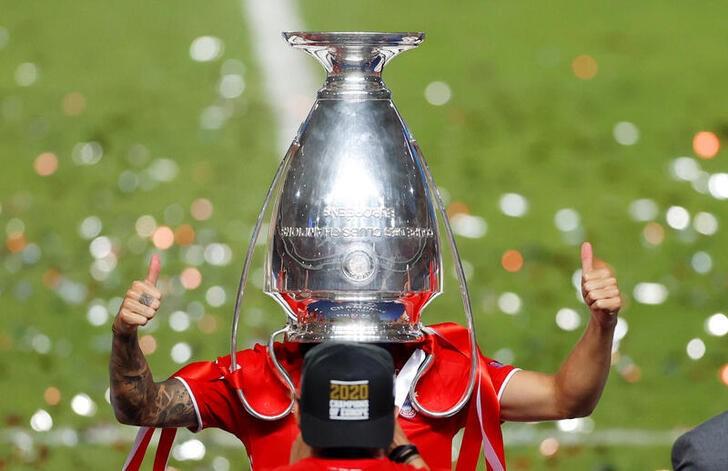 LONDON (Reuters Breakingviews) – In soccer, sudden death occurs when the result comes down to a single penalty kick. Europe’s professional clubs face a similar nail-biting outcome as mostly empty seats leave them facing financial relegation. To return to health, the beautiful game will have to import an idea from American sports.

Vacating stadia due to Covid-19 cost clubs in Europe’s top tier some 3.2 billion euros in collective revenue last season, according to the European Club Association. The loss of an estimated 15% of sales compared with pre-pandemic projections may seem modest compared to other poleaxed industries. But exorbitant player salaries, which already absorbed 60% of total revenue during the 2018/19 season, have pushed even rich clubs such as Manchester United and FC Barcelona into the red.

Even with a vaccine, fans are unlikely to refill arenas soon. The ECA, headed by Italian business magnate and Juventus Chair Andrea Agnelli, reckons grounds will be at just 20% of capacity from the beginning of 2021, resulting in a nasty 3.1 billion euro tackle to this season’s top line. As a result, stars like Paris Saint-Germain’s Brazilian forward Neymar could on average pocket an eye-watering 76 cents of every euro of revenue.

Putting a cap on player largesse would avoid such economic own goals. America’s basketball, ice hockey and football leagues all place a limit on what their stars can earn. In the National Football League, players’ share of revenue stands at 48%.

Fitting a cap won’t be easy. American wages are dictated by collective agreements between heavily unionised players and a single national league. Any attempt at salary control would probably violate European labour laws, meaning the European Commission would have to intervene. Besides, spending limits which fail to address how TV money is divided could entrench national differences. In England’s Premier League, for example, a more equitable division of media income means champions Liverpool collect a smaller share of television cash than Real Madrid does in Spain.

Yet the prospect of mostly empty stadia will push clubs deeper into financial extra time. To avoid future sudden-death outcomes, players will need to tighten their belts.

This is a Breakingviews prediction for 2021. To see more of our predictions, click here.

Reuters Breakingviews is the world’s leading source of agenda-setting financial insight. As the Reuters brand for financial commentary, we dissect the big business and economic stories as they break around the world every day. A global team of about 30 correspondents in New York, London, Hong Kong and other major cities provides expert analysis in real time.

So, We Might Not Have Seen the Last of the Super League – InsideHook

By Cameron JohnsonIn the midst of a congressional debate over revitalizing the nation's infrastructure, the green economy stands out as ripe for investment due...
Read more
Sports

The Dow Jones Industrial Average dived over 500 points before paring losses early Friday, as the blue-chip index headed for its worst week since...
Read more
Stock

How to Use Cryptocurrencies | Cole Schotz – JDSupra – JD Supra

Uses of Cryptocurrency Overview As previously detailed, there are a number of regulations surrounding Cryptocurrencies which vary by location (State Regulations) and by federal...
Read more

Of landmark scenarios that distinguish Lagos, traffic gridlock sticks out like a sore thumb. With over 20 million population compounded by daily influx of...
Read more
Economy

People line up outside a bank to withdraw cash, in Yangon, Myanmar May 13, 2021. REUTERS/StringerSept 29 (Reuters) - Myanmar's currency has lost more...
Read more

The COVID-19 pandemic sent economic shockwaves through the U.S. economy, tripling the monthly unemployment to nearly 15% and leading to a more than...
Read more
Stock

Anyone can beat the stock market, new research suggests – Fortune

Sydney Duncan holds a sign during a rally at the Alabama State House...
Read more