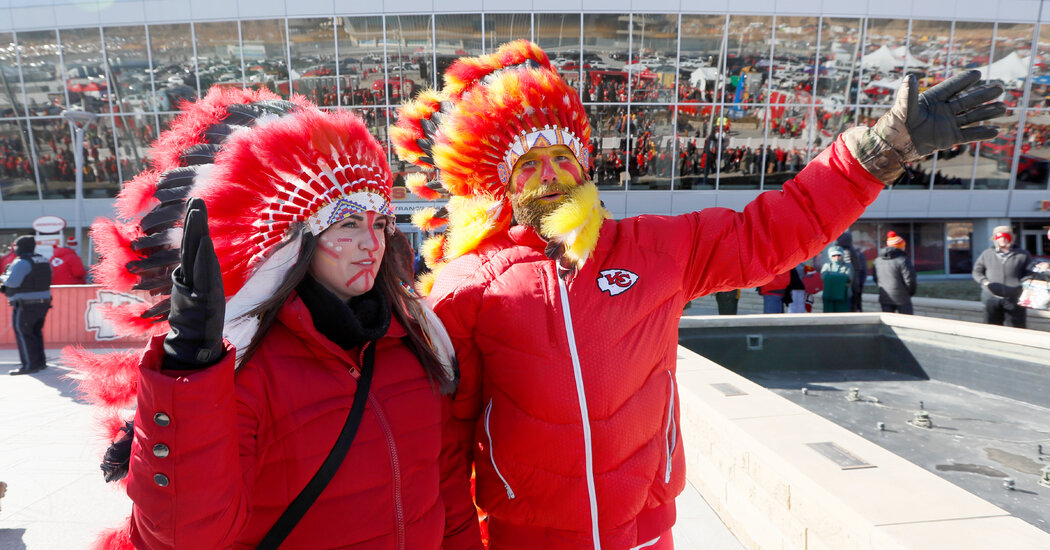 Before the Kansas City Chiefs play, Rhonda LeValdo does not feel excitement and joy. She feels outrage.

She opposes traditions that have long been staples at Kansas City games. The horse called Warpaint prancing on the sideline. The beating drums. The battle cries filling the air as thousands of fans pantomime tomahawk chops.

She wants the team to change its nickname: No more Chiefs.

“Every single game brings trauma for me,” says LeValdo, who teaches communications at Haskell Indian Nations University in Lawrence, Kan. The tired customs force her to remember massacres and stolen land. Then there are the glares and taunts from fans as she and the others in her group pass by.

“I worry for my life every time we go out there.”

The protests seemed hopeless for years. Then came this spring, after George Floyd’s death while in the custody of the Minneapolis police. Amid the nationwide push to re-examine racial discrimination, a clamor from the public and sponsors forced Washington’s N.F.L. team to abandon its racist name.

Last week, Cleveland’s baseball team decided that starting in 2022, it would no longer call itself the Indians.

For the first time, LeValdo is feeling optimistic. “We’re trying to ride a wave,” she says. “Trying to keep pushing and keep holding teams accountable. The fight for justice has to be addressed with all races, which means it must include the Indigenous people of this land. We are part of this conversation, as well.”

My recent conversations with several influential Native American educators and activists revealed a shared optimism with LeValdo. They are buoyed not only by the changes in Washington and Cleveland, but also by the Canadian Football League’s Edmonton Eskimos, who announced a name change, too. And by professional hockey in Sweden, where the Frolunda Indians say they will soon have a new moniker.

Activists now say it is time to increase the pressure on big-time American professional and college teams whose insolent mascots, and nicknames have too often escaped scrutiny.

The Chiefs need a makeover. Patrick Mahomes, are you listening?

So, too, do baseball’s Atlanta Braves, hockey’s Chicago Blackhawks and the Florida State University Seminoles.

True, there are Native Americans who say they don’t mind the caricatures and tired tropes. Like any ethnic group, Indigenous people hold a full range of views. Nor should it be surprising that a people so subjugated, brutalized and sidelined — who suffered through decades of forced assimilation — would include voices that back the status quo.

But among the most important lessons of this year’s reckoning is this: Society had better start listening to those who have been shouting for years that enough is enough — and to the fresh calls for change coming from youth.

Objectifying Native Americans, using them as props, failing to acknowledge their complexities, must stop. And in the sports world, that extends beyond the issue of team names and mascots.

What do you know about Jim Thorpe? Were you taught his history in school?

In 1951, when The Associated Press asked reporters to name the finest athlete of the 20th century’s first half, Babe Ruth came in second. The winner was Thorpe.

Did you know that Thorpe handily won the decathlon and pentathlon in the 1912 Olympics? That in the same year, he led the football team at Carlisle, his Native American boarding school, to a 27-6 demolition of a powerhouse Army team at West Point? Were you aware of how he was a pioneer in pro football and played six seasons in major league baseball?

For all his greatness, Thorpe ended up being treated the same way Native Americans have for centuries: in too many corners, his legacy is either dimly remembered, recalled simplistically, or forgotten altogether.

His third wife, a white woman with no ties to Thorpe’s Sac and Fox Nation, barged into a sacred burial ceremony held on his native lands in Oklahoma. Despite protests from tribal leaders and his children from previous marriages, she snatched Thorpe’s body with the help of state troopers. Then she ended up shopping his remains to the highest bidder.

That is how the bones of one of the greatest athletes in history ended up where they are today: in a roadside mausoleum on the outskirts of a Pennsylvania town that renamed itself Jim Thorpe, all in a bid to attract tourists and boost the local economy.

For years, Thorpe’s tribe and his sons fought to have his remains sent back to Oklahoma. The town fought back. Thorpe is their commodity. Many who live there say they are giving him admiration and respect.

You don’t have to look far to find major sports teams justifying their racism by claiming the same.

This summer, the Atlanta Braves released a statement saying their team “honors, supports, and values the Native American community.”

But a name change does not appear in the works for the team. And though the club says it is considering whether to dump its ritual tomahawk chop, such a move is no sure bet.

The Braves are said to have appropriated the chop and battle shouts from Florida State University, which still embraces that tradition. Florida State’s mascot is Osceola, a famed leader of the Seminole Indians who is played by a student. At football games, the mascot rides a horse to midfield and plants a burning spear in the turf.

The university, by the way, claims on an official website that Osceola is not a mascot. Instead, Florida State calls its faux Native American warrior “a symbol that we respect and prize.”

The Chicago Blackhawks hold tight to the same rationalization. Since the team’s inception in the 1920s, its jerseys have featured a cartoonish image of the Native American warrior who is the team’s namesake.

Like most teams that brand themselves with racist tropes, the Blackhawks have sought cover in the form of endorsements from Native American groups.

The team once had a relationship with Chicago’s American Indian Center. Then an emboldened Indigenous youth group fought the connection. Its objections were backed by recent in-depth research showing a psychological toll on the Native community caused by caricatured mascots and team names.

The center cut ties with the team.

“Our youth said they’d had enough,” said Fawn Pochel, the center’s education director. “They represent the new guard, reimagining a future that many were taught could not exist.

“New demands are going to be made.”

We keep being reminded that the stock market isn’t the economy. But then, is it possible for the market to go into a long...
Read more
Economy

Ken Griffin, who runs a sprawling Wall Street empire that includes market making operations and a hedge fund, was dismissive of cryptocurrencies even as...
Read more
World News

Covid: WHO warns pandemic will drag on deep into 2022 – BBC News

The country's International Development Minister, Karina Gould, said: "As soon as it became clear that the supply we had secured through our bilateral deals...
Read more

Cryptocurrency firm Circle to float in US in $4.5bn merger deal – The Guardian

Circle, the company behind digital currency USD Coin, is to float in the US in a $4.5bn (£3.27bn) merger deal with a company chaired...
Read more
Stock

INDIANAPOLIS — Police on Friday identified the suspected gunman who killed eight people in a mass shooting late Thursday night at a FedEx facility but were...
Read more

Tune in to WFAN every Sunday morning for 'Rick Wolff's Sports Edge,' and follow Rick Wolff on Twitter @askcoachwolff. How do I know that HS...
Read more
World News

"Likewise, I also delved into books marketed for adults for the first time, reading adult fantasy and sci-fi books as beforehand, I had only...
Read more
Business