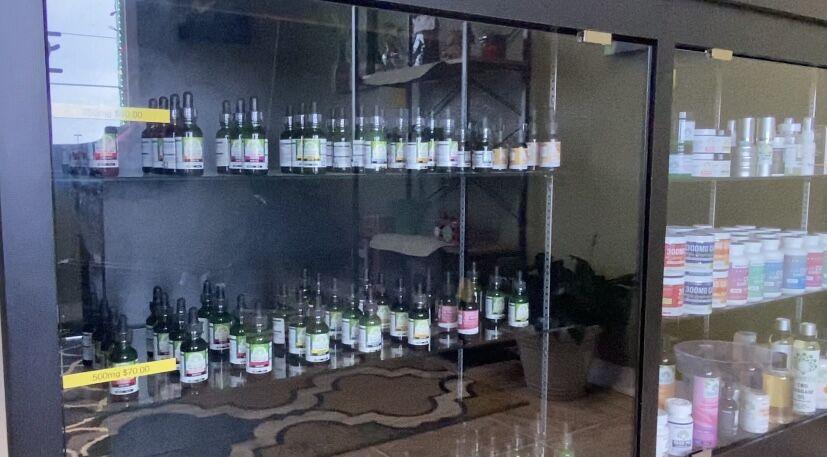 St. Joseph has been a starting ground for many CBD businesses over the last few years.

All along the Belt Highway, finding a shop that sells CBD products is about as common as finding a McDonald’s.

CBD, also known as cannabidiol, is the second most prevalent of the active ingredients in cannabis, according to Harvard Health Publishing. The only difference is that CBD derives from the hemp plant, closely related to the marijuana plant, but once separated from all other active ingredients, it does not cause a psychoactive effect. CBD products can be sold as long as the THC content is less than 0.3%.

Now, St. Joseph is welcoming Vertical Enterprises, a company specializing in the cultivation, manufacturing and dispensing of medical marijuana, and therefore the CBD stores remain more firmly planted in their spots than they were before.

Mark Jones is the owner of a CBD franchise in St. Joseph. He owns Sacred Leaf Zero CBD+, located at 5906 N. Belt Highway, and the backstory of what made him and his brother want to get into a business like this involves someone they hold close to their heart.

“The first CBD was for my father who had Parkinson’s, and since (then) we’ve seen what CBD can do for people with Parkinson’s. It’s a big reason why we opened the store,” Jones said.

He noticed that CBD made the quality of his father’s life much better before Parkinson’s eventually took his life. From there, Jones had a friend in the industry who invited him to open up the store he owns today. At the time, Jones said he didn’t care if others disapproved of him opening up a store that sold CBD products even at a time when it was still new to people. He believes the reasoning for opening up shop is about the much bigger picture.

“I just knew we wanted to help people and that was the main thing,” Jones said. “We did jump into it pretty quickly, but we did do a lot of research too.”

Any chance he gets, Jones says his store likes to explain the difference between CBD and marijuana and that informing his customers of the difference when they come to buy from Sacred Leaf Zero is very important to them. Jones is aware of medical marijuana dispensaries coming to town. He thinks the revolution is great for business.

“I think it’s going to open people’s eyes more to the product and to the plant itself,” Jones said.

Muhammad Khan is the owner of Hemp Victory Garden, located at 1105 S. Belt Highway. He’s owned the franchise for the last two years, and at 20 years old, he sees a future in where the industry is going.

“I think long-term, as people get to try it more and more, it’s a huge alternative,” Khan said.

Khan is aware of Vertical Enterprises making its way to the city and he doesn’t view them as a competitor.

“I’m actually really happy about it,” Khan said. “I think it’ll be really good for the community to kind of see that ‘hey, you know, it’s clean, we have test results, it’s from a dispensary, it’s from the state and it’s basically all regulated.’”

Vertical Enterprises and manufacturers of medical marijuana are coming to Missouri whether the population is upset or not. Both Khan and Jones are happy to see medical marijuana is coming to St. Joseph and they believe it will help their businesses grow because of it.

If you searched for Bitcoin news recently, the main headlines likely centred on the rising price, the falling price, or just the price of...
Read more
USA

Columbus Air Force Base is expanding its culinary scene with a new Thai restaurant. Well, new to the base. Gon Carley, owner of...
Read more
Business

Banks have done a lot to put themselves in a position to benefit from higher rates. Now investors just have to wait. Second-quarter earnings...
Read more
Economy

How Blue Hydrogen Can Help Decarbonize The Economy – Forbes

The stock market is ‘very, very vulnerable’ at these euphoric levels and a ‘timeout’ is in order, investor warns – MarketWatch

“ ‘Sentiment has gotten as ebullient as we saw in early 2000. It’s all about that enthusiasm for stocks that should...
Read more

New Delhi: Major cryptocurrencies were trading higher on Friday. Eight out of the top 10 digital tokens were trading with solid gains at 9.30...
Read more
Economy