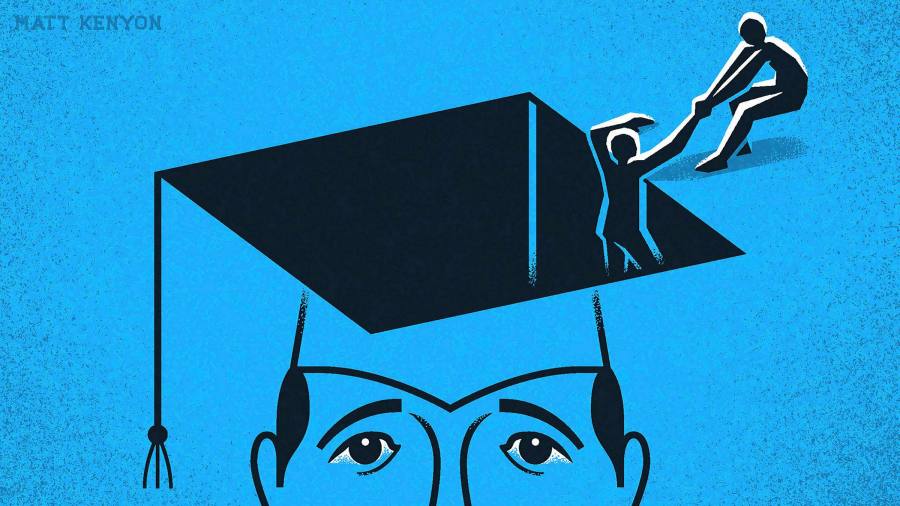 Millennials have overtaken baby boomers as America’s largest bloc, and they and those younger than them will comprise nearly as many voters as all older generations combined in G7 countries by the end of the decade.

But large swaths of younger Americans reject the country’s political system. Research by the Centre for the Future of Democracy shows that a far lower percentage are supportive of democracy than boomers, Gen X, or, of course, the interwar generation. Perhaps that’s because they have so little economic stake in the system. Millennials make up close to 25 per cent of the population but hold only around 3 per cent of US wealth. Boomers, who held 21 per cent of wealth at the same period in their lives, still control the vast majority.

That’s one key reason that Democrat Joe Biden campaigned for president on cancelling $10,000 of student debt for every federal borrower, a $400bn proposition. Crushing student debt — the average four-year college graduate has $30,000 of it — prevents young people from buying homes, cars and other consumer goods. That is, in turn, a major headwind for the economy.

At the end of January, pandemic-related student loan relief is scheduled to end, and the 43m Americans who have student loans will have to start paying them back unless further relief is approved. And so, the idea of a student loan jubilee — this term for mass debt forgiveness comes from the Old Testament — is once again on the front burner. It is a good idea — but only if debt relief is targeted to those who really need it, and accompanied by a host of other reforms.

The majority of debt is held by middle-class and rich Americans who spend a lot to send their children to the best universities. The cost of attendance is itself a sign of how broken the education market is: tuition inflation runs at more than three times the consumer price index.

Even the wealthy have trouble putting enough away for their children’s tertiary education when four years at a prestigious school costs more than $200,000. I have a stable, well-paying job and yet have had to do substantial freelance work on the side for a decade to fully fund both my children’s college savings accounts, known as 529 plans.

Putting them through school debt-free was always a personal goal of mine, since my own parents did so for me with far fewer means. My mother, a school teacher, worked every summer for years to bring in extra funds and so did I, from age 12. My father stayed in a job he hated until I graduated from my Ivy League university.

But these are high-class problems. The poorest 25 per cent of households hold far more debt as a percentage of their income and wealth. These borrowers are more likely to drop out or default, in part because they often do nor receive as much of a pay-off from their education and also have to juggle part-time work with school, which makes it tougher to graduate.

That lower quartile is also disproportionately African American. This raises thorny social issues. Working-class whites without a four-year degree struggle, but they are on average more able than minority peers to get by with vocational training or a high-school degree. Poor black people know it’s up or out — try for college, whatever the cost, or risk falling off the economic ladder.

That is one reason that I am in favour of means-tested student loan relief. It should be targeted to the lower quartile of the income ladder, for whom it could be life-changing. There is a risk that the populist base of the Republican party would object to a programme that would disproportionately benefit black Americans. But it doesn’t have to be an identity issue. If we look at it another way, there is not just economic and racial justice but also disproportionate economic benefit to writing off debt for the lower 25 per cent. Research shows the poor are much more likely to spend the money rather than save it, as wealthier families might.

Secondly, debt forgiveness must come along with a fundamental understanding that the higher educational system is broken. We are familiar with the problems. Too many families are going into debt for degrees that don’t lead to jobs that pay enough to allow repayment. Many good jobs require vocational or technical training rather than the liberal arts degrees that many students sign up for. We also need a major reset in secondary education, which hasn’t been reformed in half a century.

When Mr Biden takes office, he should forget about a federal community college guarantee that ensures graduates of two-year programmes can get four-year degrees and fix secondary school instead. Follow the example set by robust “6 in 4” high school programmes, like the Bard Early College High School or the P-Tech high schools, which combine two years of college credit in a high school degree. They already have a record of success.

Business can help too. Many name-brand companies are moving to hire based on skills rather than credentials, working with non-profit groups to help find people with persistence, ambition, and ability if not a four-year degree. Public universities need to stop borrowing money to build fancy facilities aimed at attracting the global elite. Instead they should focus on high-quality education for instate students. There is no silver bullet for the solving the student debt issue and fixing higher education. But there are plenty of smart ways we can chip away at the problem.

Instead, it's looking at Taiwan's surrounding waters for solutions, planning to build more seawater desalination plants. Most are located in outlying islands, with only...
Read more
Business

In much of the economy, the big question is when it will be safe to go back to pre-pandemic patterns of spending. For business...
Read more
Stock

Stocks rose slightly on Tuesday, recovering some of their sharp losses from the previous session, as traders mounted bets for a strong global economic...
Read more

U.S. stocks fell Thursday amid a pickup in Covid-19 hospitalizations and renewed talks of lockdowns and restrictions to curb the virus’s spread. Investors...
Read more
Cryptocurrencies

Cryptocurrencies invite paranoia. Maybe that is why Brad Garlinghouse of crypto company Ripple is the only tech boss to have brought a bodyguard with...
Read more
Business

PITTSBURGH, April 29, 2021 /PRNewswire/ -- PNC Bank is proud to announce its 11th annual Women in Business Week, which will be held...
Read more

Greetings from the land of leftovers. Cut yourself a slice of cold pie and catch up on the business news you need to know...
Read more
Business

Greg Brown, general manager of Hilton Baltimore, inside the Hilton Baltimore Inner Harbor. The hotel has welcomed back guests and even hosted about...
Read more
Cryptocurrencies