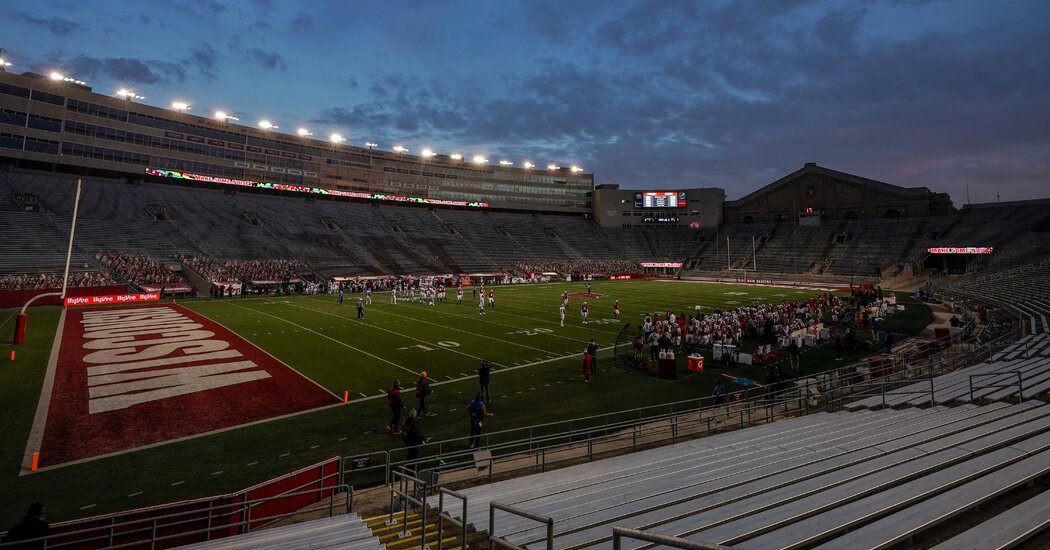 More than 6,600 college athletes, coaches and staff members have tested positive for the coronavirus this year, a dispiriting measure of the pathogen’s reach across the United States and its spread among some of the country’s most closely monitored people.

At least 6,629 people who play and work in athletic departments that compete in college football’s premier leagues have contracted the virus, according to a New York Times analysis. The vast majority of those infections have been reported since Aug. 15, as players, coaches and the staff around them prepared for and navigated the fall semester, including football season.

The actual tally of cases is assuredly far larger than what is shown by The Times’s count, the most comprehensive public measure of the virus in college sports. The Times was able to gather complete data for just 78 of the 130 universities in the National Collegiate Athletic Association’s Football Bowl Subdivision, the top level of college football. Some of those schools released the pandemic statistics only in response to requests filed under public records laws.

The remaining schools, many of them public institutions, released no statistics or limited information about their athletic departments, or they stopped providing data just ahead of football season. This had the effect of drawing a curtain of secrecy around college sports during the gravest public health crisis in the United States in a century.

No athletic department that shared data reported any deaths associated with the virus, the spread of which the N.C.A.A. did not track at its member schools.

“We felt there was nothing to hide,” said Barry Alvarez, the Wisconsin athletic director. Wisconsin recorded at least 112 cases in athletics, missed back-to-back football games during an outbreak and had a third game — against Minnesota — canceled because of cases within its program. “We felt that it was in our best interest and everyone else’s best interest to put out accurate information, particularly if we had to cancel a game, so you wouldn’t have rumors or misinformation,” Alvarez said.

The cases in athletic departments are only a fraction of those in a country that has recorded more than 15 million infections — the most of any nation. Still, they collectively demonstrate how the virus can intrude on programs even when they have stringent safety protocols, including widespread testing. Indeed, the Big Ten Conference, which required its athletes and coaches to submit to daily testing, had the most known cases of any top league and saw some of the worst outbreaks in college sports.

Raw numerical figures like the ones universities have provided cannot reveal the origins of any single infection or cluster of cases. An athlete could have easily contracted the virus from a friend or relative rather than a teammate. And experts believe that virtually none of the infections in college sports are linked to the games themselves. Rather, they are far more often traceable to meetings, meals, travel or nonathletic activities that then seed cases.

But it is also true the college sports industry, partly hampered by a disjointed system of governance that is particularly acute in football, has developed only so much of a shared strategy to combat the pandemic’s risks.

Testing standards vary from one conference to the next. So do league policies on matters like whether spectators can attend games, how to reinstate players who are sidelined by the virus and when teams can postpone or cancel games. The N.C.A.A. has health guidelines, but many of them are only recommendations.

A survey the National Athletic Trainers’ Association released in September found that not even half believed that coaches and staff members across college sports were “fully compliant” with safety protocols related to the virus. And university leaders have routinely hidden their deliberations and debates from public view.

The N.C.A.A., whose oftentimes limited power over its leagues and schools has been conspicuous throughout the pandemic, said in a statement to The Times that “medical data is governed by a variety of federal and state regulations and, for that reason, access and use are determined at the institutional level.”

It added that more than a dozen of its members had shared information with the Centers for Disease Control and Prevention “for the purpose of better understanding resocialization as it pertains to quarantine and testing.”

The data gathered by The Times, though, shows at least some of the consequences and risks of a porous, multibillion-dollar athletic network centered on college campuses. Although five members withheld complete data, schools in the Big Ten, which includes 14 universities, collectively acknowledged at least 1,850 infections, the most of any league.

Minnesota reported 336 cases in its athletic department, more than any other school in the F.B.S., including 176 in November alone. Iowa, also a Big Ten member, has disclosed 330 positive tests.

Although the Big Ten struggled with the virus, especially as the pandemic raged through its Midwest-centric footprint, the data shows at least the partial extent of the struggles in other leagues’ athletic departments.

Athletic departments in the Big 12 Conference, which has 10 schools, for instance, reported at least 1,357 cases. And although most members of the Southeastern Conference, the college football league that many people fear, respect and revile in equal measure, refused to provide complete data, The Times found at least 587 cases in its athletic departments.

Members of the Pac-12 Conference — last of the Power Five conferences to start its football season — reported 357 cases within athletics, and Atlantic Coast Conference schools disclosed 809.

A handful of athletic departments reported only the number of positive tests, not unique cases, meaning it is possible that some individuals were counted multiple times. Other schools did not specify whether they were counting tests or cases. The Times excluded all numbers from those schools — nearly 1,400 positive tests — from its national total.

The ranks of the infected have included some of the most prominent figures in college athletics. In football, the coaches Nick Saban of Alabama and Ryan Day of Ohio State tested positive and spent days in isolation. Tom Izzo, the men’s basketball coach at Michigan State, tested positive, as did Jim Boeheim of Syracuse and Scott Drew of Baylor. At least three of the Southeastern Conference’s athletic directors tested positive.

Universities have only rarely identified players who contracted the virus, as Clemson did when it announced that Trevor Lawrence, a quarterback who could be one of the most coveted players in next year’s N.F.L. draft, had tested positive.

Clemson is among the schools that have proactively released regular tallies of cases within its athletic programs.

“We understand there is public interest in our department’s results, and felt that in this matter of public health, transparency was the best way to operate,” Jeff Kallin, a spokesman for the athletic department, said in an email.

“We have nothing to hide,” Brian Kelly, the football coach at Notre Dame, said in October. “We’re fighting through this coronavirus like everybody else.”

He added: “We felt like if we were going to hide numbers, there would be a sense of distrust, and we didn’t want to start with that. We wanted to start with transparency and get the numbers out there and let everybody know that we would.”

Dozens of other schools did not.

By late July, The Times had found at least 630 cases in athletic departments on 68 campuses. The University of North Carolina had reported 37 infections, for instance, and Western Kentucky University said it had just six.

But those schools were among the 13 that stopped releasing statistics about cases within their athletic programs. Some schools changed their approaches as the start of football season neared, abruptly citing privacy laws to justify withholding the very data they had provided for weeks or months. A handful offered no explanation at all.

Others, like North Carolina, said they had ultimately opted to disclose cases only through campuswide counts. Those tallies could not be used to assess the reach of the virus exclusively within athletic departments.

The University of Central Florida also merged its athletics data with broader campus counts, a change it made after players worried that infected students would be easily identified on game day, Danny White, the university’s athletic director, said this fall.

“We’re trying to listen to our student-athletes,” White said in an interview with The Orlando Sentinel.

Nineteen universities, including Coastal Carolina, Louisiana State and Northwestern, consistently declined or ignored requests for information, and The Times could not locate any case data released by those schools. Many of the schools that explicitly rejected requests offered no explanations for their decisions.

Alvarez was unsurprised that some schools had held back. As a former football coach, he said he understood. But he also said he and others at Wisconsin had concluded that ordinary hesitations should not always apply in 2020.

“I think coaches are reluctant sometimes to give out a scouting report, et cetera,” Alvarez said. “That’s old school. A lot of coaches are paranoid — that comes with the business — but we felt this was more serious.”

Synchronized Swimming Has a Concussion Problem – The New York Times

This article originally ran on CNBC.com.Like many single parents, JoAnn Hargrove has been struggling throughout the pandemic.Her 7-year-old daughter has spent the past year...
Read more
Stock

Thinking of buying bitcoin? What experts say about big crypto concerns: ‘You have to be mentally prepared’ – CNBC

The price of bitcoin hit a record high of over $41,000 on Friday, according to CoinDesk. It now has a market value of over...
Read more
Cryptocurrencies

The Future of Crypto and Casinos – Infosecurity Magazine

By using Blockchain technology, cryptocurrencies find their way into many industries as secure payment options across many online platforms, including casinos. Across the spectrum...
Read more
European Premier League

A new 36-team Champions League format from 2024 is set for final approval by UEFA's executive committee on Monday.A decision had initially been expected...
Read more

For the latest installment of the Inside the Practice segment of the Medical World News® broadcast, CancerNetwork® spoke with Albert H. Kim, MD, PhD,...
Read more
Stock

Playing sports can be beneficial to athletes’ physical and mental health. Researchers at the American College of Sports Medicine discovered that middle school...
Read more