The story of the U.S. economy in 2020 will consist of three major shocks: Covid, racial unrest and an election that divided the nation.

But let’s start at the beginning, before the pandemic, when things seemed poised to go quite differently.

Unemployment was at record lows, and yet employment kept rising. The longest economic expansion in U.S. history appeared to have set off a virtuous cycle: Job gains led to increased household wealth and spending, which in turn encouraged more hiring, in some cases pulling off the sidelines people who had stopped looking for work.

Even more striking was that after years of widening, the wealth gap was shrinking. According to the Federal Reserve’s Survey of Consumer Finances, people in the lowest income quintile saw their net worth rise 37% from 2016 to 2019, while the top quintile largely held steady. Blacks and Hispanics, meanwhile, saw gains in net worth of 33% and 65%, respectively, while whites saw a gain of 3%.

How do you see the economy recovering in 2021? Join the conversation below.

A tight labor market drove employers to raise wages, offer greater schedule flexibility and invest more in worker training. Incomes among younger people rose substantially—by 13% among those under age 35—as they gained more opportunities, skills and work experience. Even the most stubborn economic trends, such as declining Black homeownership rates, finally turned around in 2019.

And then the pandemic arrived. The depth and breadth of its economic disruption was greater than that of any postwar recession. About 40% of those who earned less than $40,000 lost their jobs in March. New weekly jobless claims, which had hovered above the 200,000 mark for months, soared past six million.

The distribution of the job losses, meanwhile, was completely different from what one usually sees in downturns. Low-income Americans were the hardest-hit group in terms of both the general economic impact of government-mandated lockdowns and reduced spending on face-to-face services. Black and Hispanic workers are disproportionately represented in some of the industries that suffered most, such as restaurants and barber shops.

In broader terms, this was the first service-sector-led recession, a big-city recession and a women’s recession. From February to April, the employment level fell 15% for women ages 25 to 54, compared with 12% for men, according to the Bureau of Labor Statistics. Among the four million people who have been pushed out of the labor force since February, 55% are women. Many had little option but to suspend their careers as school closures and health risks disrupted child care and schooling.

But while restaurants, hotels, travel services, theaters and sports leagues confronted cancellations, other industries have benefited from the unfortunate circumstances. Grocery stores received a sudden boost to sales, and the nation’s supply chain kicked in to surmount shortages of basic foodstuffs (despite empty toilet-paper and bleach shelves). E-commerce companies became a lifeline for millions of people reluctant to leave their homes. Online learning companies blossomed, as did the home-exercise sector and videogames.

The unprecedented challenges of the pandemic spurred innovations. Access to telemedicine expanded thanks to rule changes in Medicare and Medicaid allowing patients and doctors to be reimbursed for remote visits. A company called Zoom, which few had heard of before the pandemic, became an instant global brand. Manufacturers repurposed assembly lines to make ventilators and masks, doing their part—usually voluntarily—to save lives. Feared ventilator shortages did not come to pass.

Congress took a rare break from partisan battles to approve the largest stimulus package ever passed. Millions of Americans received $1,200 stimulus checks, no questions asked. The Paycheck Protection Program kept many small businesses afloat while providing a windfall for others. Expanded unemployment benefits helped the jobless get by and helped sustain spending. As a result, household incomes and expenditures were surprisingly resilient.

But then another shock took place. On May 25 in Minneapolis, a Black man named George Floyd died while being arrested by police, one of whom was later charged with second-degree murder. As a cellphone video of Mr. Floyd’s death began to circulate, protests and civil unrest spread across the country. Shopping districts that had just begun to reopen after Covid-19 lockdowns now boarded up their storefronts; in some cities curfews were imposed.

Meanwhile, the stock market recovered quickly, and the labor market’s recovery beat expectations. By November, unemployment had fallen to 6.7% from 14.7% in April.

The third shock came as no surprise, but was difficult to bear nonetheless: the contentious election. Many important issues were at stake, including economic policy. Rather than a blue wave or a red wave, the American people produced a mixed election result, with Democrats winning the presidency but shrinking their margin in the House. Control of the Senate remains up in the air, pending the result of runoff elections in Georgia in January. Historically, divided government has been associated with stability.

So, despite three major upheavals in 2020, the U.S. economy now is primed for recovery, growth and continued adaptation to a new normal. Some industries will continue to suffer as long as the pandemic lasts—and beyond. Commercial-real-estate companies and bricks-and-mortar retailers are reinventing themselves for a new work-from-home, shop-from-home age.

But there is no society better prepared for what awaits. Startups are blossoming. There were almost 1.6 million new business applications in the third quarter of 2020, up from fewer than 860,000 a year earlier. The financial sector is solid, largely thanks to a much bigger, faster response from the Federal Reserve than during the financial crisis of 2008-09. An online economy, hardened thanks to recent surges in broadband infrastructure, kept America running through its recent dark days and will only expand. Highly effective vaccines will start becoming available soon, along with inexpensive, rapid Covid-19 home tests.

When it is safe for business to resume as usual, the economy could take off. Americans have accumulated $2 trillion in new savings deposits since February, according to the Federal Reserve. That is more than 10% of gross domestic product waiting to be spent.

Vulnerabilities exposed by the pandemic will now receive more attention and investment. Federal and state governments will likely shore up emergency stockpiles of beds, medicines and personal protective equipment. They are also likely to overhaul outdated unemployment-insurance websites, which crashed during the pandemic, to be able to process a steady stream of applicants when the next recession causes a spike. And just as the Fed and financial system were better prepared for this crisis than they were for 2008, our fiscal-policy infrastructure will be better prepared for the next emergency.

We have gained valuable practice sending checks out to households, expanding and extending unemployment insurance, using temporary flexibility in SNAP benefits (food stamps) and making forgivable loans to businesses. Policy makers are evaluating data now that will enable us to learn from our mistakes and be more effective in the future. 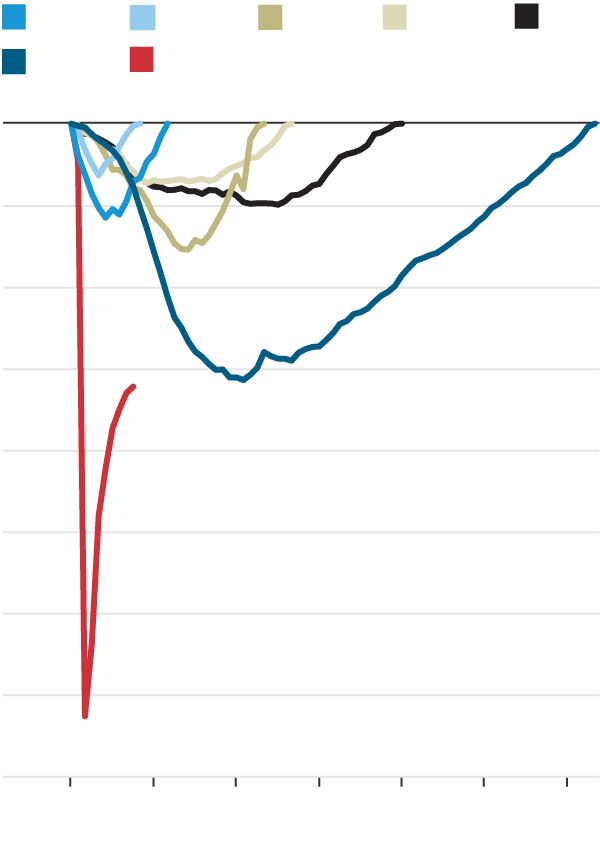 MONTHS SINCE MOST RECENT EMPLOYMENT PEAK

Meanwhile, our leap into the future of work will create new opportunities. Now that remote work is more widely accepted, many employees will no longer be tied to high-cost urban centers that previously had held a monopoly on certain kinds of jobs. They’ll be able to move to places where one can actually build houses and raise a family comfortably. And as more people vote with their feet, state and local governments will have to become more responsive, whether on taxation and housing policy, school quality or police accountability.

People will continue to save time and money formerly spent on commuting. We could start to see exciting new uses of physical space that employers no longer need. Office buildings could be converted into housing, parking garages into outdoor parks and parking lanes into bicycle paths.

Workers with disabilities or conditions that make it hard to leave the home will find new opportunities in the work-from-anywhere economy. And, while women suffered the brunt of the job losses in 2020, they could end up being the biggest winners in the long term from the adoption of more-flexible work arrangements. Balancing work and parenting will be easier in a world where working from home remains an option but schools are operating normally.

America had a rough year, but we might look back on 2020 as the start of a new, even more resilient, more inclusive and more sustainable boom.

• March 12: The Dow Jones Industrial Average suffers its worst day since 1987 as swaths of commerce shut down due to the pandemic and a recession looms.

• April 21: Netflix says it ended the first quarter with nearly 16 million new subscribers around the world, more than double the number forecast.

• June 8: The U.S. officially entered a recession in February, the group that dates business cycles says.

• July 30: The economy contracted at a record 32.9% annual rate in the second quarter, the Commerce Department reports.

• Oct. 29: The economy grew at a record 33.1% annual pace in the third quarter, the Commerce Department reports. The economy has recovered about two-thirds of the ground lost earlier in the pandemic.

Ms. Pollak is a labor economist at jobs marketplace ZipRecruiter. She can be reached at reports@wsj.com.

LABI: Get the shot for the economy – KATC Lafayette News

The U.S. economy gained 850,000 jobs in June and the unemployment rate rose to 5.9 percent, from 5.8 percent, a sign that the recovery...
Read more
Cryptocurrencies

Dogecoin is a 'meme' cryptocurrency, seemingly created as a joke Records reveal that 28% of dogecoin in circulation is owned by a single investor. ...
Read more
Sports

Salem-Keizer will have no high school sports until at least Jan. 4 – Statesman Journal

There will be no high school sports among the Salem-Keizer Public Schools until at least January, the district announced this week.Because of the recent...
Read more

Tom Llamas signed off from ABC News on Sunday, after serving as weekend anchor of World News Tonight, amid reports that he will land...
Read more
Economy

WASHINGTON — President-elect Joseph R. Biden Jr. on Friday promised an accelerated response to a daunting and intensifying array of challenges as the economy...
Read more
Business

How To Start a Cleaning Business: What You Can Expect To Earn – GOBankingRates

How To Start a Cleaning Business: What You Can Expect To Earn | GOBankingRates
Read more

CHICAGO (May 5, 2021) – The U.S. Men’s National Team will take advantage of the first friendly opportunity on U.S. soil during a FIFA...
Read more
Stock

Some traditions are too time-honored to shirk, and on Wall Street, the annual ‘top picks’ are one. Usually made at the very end or...
Read more
World News

Five cases of the new coronavirus variant spreading fast across the UK have been found in Japan, and Russia has become the latest country...
Read more

Youths from the community play a friendly Netball match after the official launch of the new Taboville multi-purpose sports complex in Kwa-Langa., Kariega on...
Read more
Business

Those interested in what Encompass Health Corporation (NYSE: EHC) will do next with its home health and hospice segment have been largely left to...
Read more
Economy

Alaska Gov. Mike Dunleavy is the “decider” for winners and losers in the salmon season as the state careens toward a shutdown...
Read more