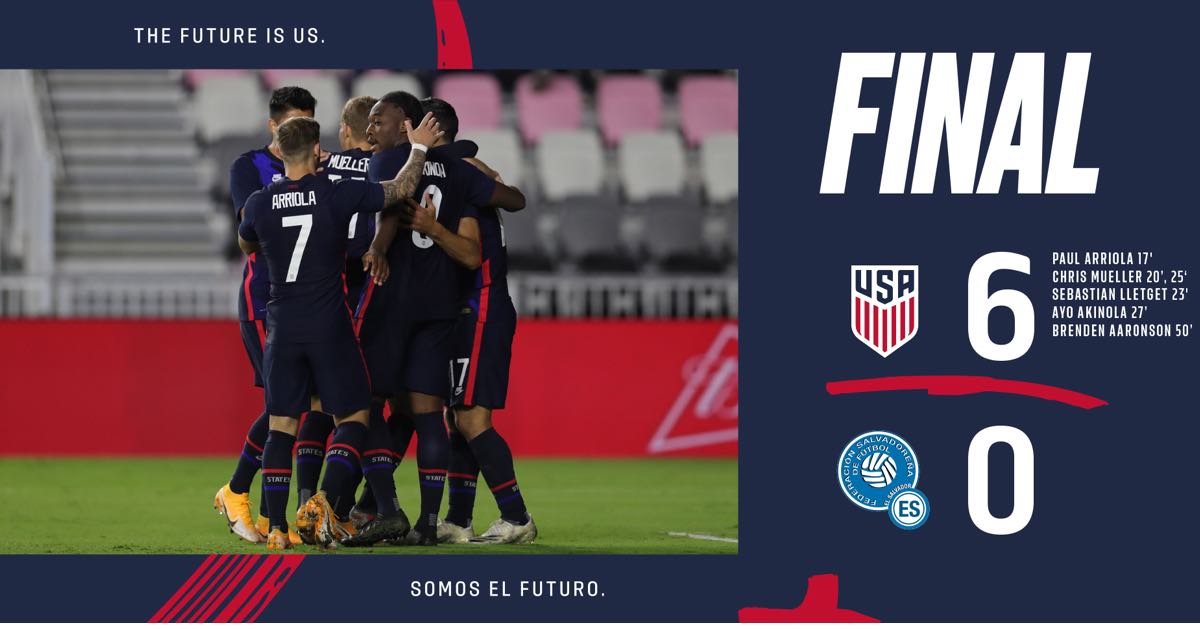 An explosion of five goals in 10 minutes broke the game open for the USA midway through the first half and the USMNT dominated down the stretch to add another in the second and record a shutout.

Debutant forward Chris Mueller became just the sixth player to bag a brace in his first USMNT cap, netting two goals in five minutes, while fellow debutant forward Ayo Akinola added a goal of his own. Midfielder Brenden Aaronson also opened his international account with the final goal in the second half.

Following his recovery from a torn ACL suffered in February, forward Paul Arriola opened the scoring in his first start since the injury, while midfielder Sebastian Lletget tallied a goal in his second-straight match for the USA.

While the COVID-19 pandemic turned the international soccer calendar on its head in 2020, the USMNT finished undefeated in its four matches this year, going 3-0-1 and outscoring opponents 13-2.

Half of head coach Gregg Berhalter’s starting XI made its first or second appearance with the USA. In addition to Akinola and Mueller, defender Julian Araujo picked up his first cap as the starting right back. With Araujo providing the assist on Mueller’s second goal, every starting debutant got their name on the scoresheet.

After some promising early action, the USMNT found its breakthrough in the 17th minute off some nifty play by Mueller. On the run up the left wing, the Orlando City SC forward leapt over a defender attempting a tackle and slid a pass between two more onrushing Salvadorans to find Arriola near the penalty spot. Arriola rocketed a shot past El Salvador goalkeeper Henry Hernandez for his sixth international goal in the 17th minute.

Arriola’s goal sparked the USMNT’s hunger for more goals and catalyzed a number of more attacking opportunities, and the floodgates opened quickly thereafter. When a cross from Lletget deflected off El Salvador, Jackson Yueill put it quickly back in the box where Mueller fired it home in the 20th minute for his first of the evening.

Lletget found a goal of his own three minutes later on an impressive individual run. Driving downfield after receiving a well-placed pass from midfielder Brenden Aaronson, Lletget drove past a number of Salvadoran defenders and chipped Hernandez from the top of the box.

Mueller bagged his brace in just five minutes of play off of a beautiful ball sent in by defender Julian Araujo in the 25th minute. The young right back took a moment to settle the ball just beyond the corner of the box before delivering a lovely looping pass to the far post, where Mueller met it with a diving header.

Another breakaway capped the USMNT’s first-half scoring frenzy. As three U.S. attackers charged down the field, Mueller unselfishly laid the ball off for an onrushing Akinola, who arrived with a first-time sliding shot tucked into the near post.

The offensive onslaught continued in the second half when Arriola found Aaronson with plenty of space at the top of the box in the 50th minute and he sent a hard-hit shot to the back of the net.

In the second half, two more players made their international debuts in outside backs Marco Farfan and Kyle Duncan. They formed part of a U.S. defense that also held strong down the stretch as the USA outshot Los Cuzcatlecos 20-3.

On a relatively quiet day, goalkeeper Bill Hamid was called upon to make a pair of saves midway through the second half and recorded his third solo shutout in his eighth international appearance with the help of some rock-solid play from his back line.

The USMNT will return to action in January 2021, kicking off a year that will feature the Concacaf Nations League Finals, the 2021 Concacaf Gold Cup and the start of qualifying for the 2022 FIFA World Cup.

After a number of promising early chances for the U.S. attack, the breakthrough came from Paul Arriola following an impressive run by Chris Mueller, making his first appearance for the USA at any level. Cutting towards goal from the left wing, the forward leapt over a slide-tackle and maintained possession before dishing between two more defenders to Arriola near the penalty spot. In his first start since recovering from a torn ACL, Arriola fired a rocket of a shot through the defense to the top right corner of the net. USA 1, SLV 0

After setting up the first, Mueller found a goal of his own just three minutes later. Sebastian Lletget sent in a cross from the left side that deflected off the defense beyond the 18-yard-line. Jackson Yueill collected the loose ball and sent it to Muller at the top of the box, who made a move and rifled a shot to the far post. USA 2, SLV 0

From midfield, Brenden Aaronson found Lletget in stride as he sprinted past three El Salvador defenders. As another came in to make a tackle, Lletget spotted El Salvador goalkeeper Henry Hernandez off his line and chipped a shot over his outstretched reach for a goal in his second consecutive USMNT appearance. USA 3, SLV 0

USA – Chris Mueller (Julian Araujo), 25th minute
The second goal of Mueller’s debut brace came thanks to excellent service from fellow first capper Julian Araujo. As the USMNT worked the ball around the El Salvador half, Araujo had space beyond the top right corner of the box to settle the ball and tee-up a booming cross to the far post. Mueller was well-positioned to meet it and dove to head it past Hernandez. USA 4, SLV 0

USA – Ayo Akinola (Chris Mueller), 27th minute
Sprung by a nice pass from Paul Arriola, the U.S. attack had El Salvador on its heels as three attackers bared down on goal. Aaronson found Mueller across the box on the run towards the net and when Hernandez came out to meet him, the Orlando City SC winger unselfishly laid the ball off for a charging Ayo Akinola. The striker beat his mark with a sliding finish that he tucked just inside the near post. USA 5, SLV 0

The USMNT put another on the board just after the break, as Brenden Aaronson netted his first international goal. Driving towards the end line, Arriola sent a ball to the top of the box, where the Philadelphia Union midfielder had plenty of space to gather the ball and hammered a shot on goal, which deflected off the El Salvador defense and into the back of the net. USA 6, SLV 0

Bitcoin powered to a record high on Tuesday, approaching the $50,000 mark, basking in the afterglow of Elon Musk-led Tesla’s investment in the cryptocurrency that...
Read more
European Premier League

A rarely seen Man Utd forward could be handed the opportunity of a fresh start by a perennial Champions League side, claims a report.Man...
Read more

Markets brimming with investor optimism on US economy – Financial Times

It is easy to understand why investors are resoundingly positive about the economic outlook this year. But are markets pricing in too much optimism?The...
Read more

The Headline(s) Mr. Dirt Track USA is crowned in a violent uprising at Lebanon Valley, while the premier late model tours in the country bog...
Read more
Cryptocurrencies

Head of WHO mission probing pandemic origins says virus may have started with a Wuhan lab staffer becoming infected.The idea that the coronavirus pandemic...
Read more

UK Prime Minister Boris Johnson is set to deliver on his plans to introduce laws to stop a breakaway European Super League in the...
Read more
Sports

(Illustration by Marshall Sunner | Collegian Media Group) Soccer: The soccer team (5-4-0) is coming off another impressive win over the University of Texas Rio...
Read more
Cryptocurrencies

The US Treasury Department proposed strict regulations for cryptocurrency exchanges earlier this month to identify owners of digital assets in the US. Crypto...
Read more