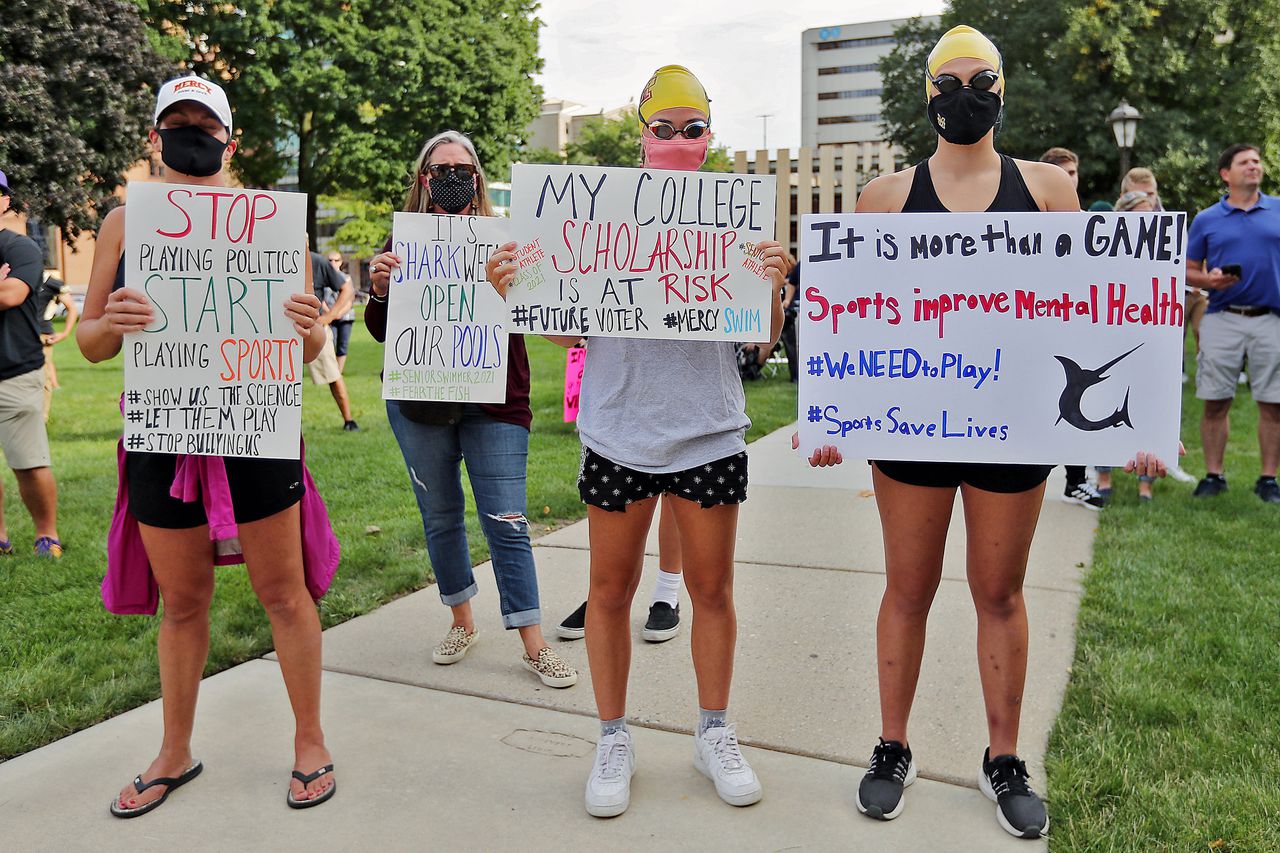 Jayme McElvany appreciates every one of her new friends.

But she was hoping they wouldn’t need another get-together.

The organizer behind the Let Them Play movement, which supported a return to action for all Michigan High School Athletic Association sports this fall in the face of the coronavirus pandemic, is sending out a call for a sooner-than-expected reunion.

McElvany and her group are planning a rally at the Capitol in Lansing from 3-5 p.m. Friday, making a plea to Gov. Gretchen Whitmer and the Michigan Department of Health and Human Services to reinstate prep sports.

High school athletics have been on hold throughout Michigan as part of the state’s partial shutdown that went into effect Nov. 18 and was recently extended from Dec. 8 to Dec. 20.

“We were patiently waiting in the wings with our fingers crossed, hoping to start playing after (Dec. 8),” McElvany said. “When it didn’t happen, it was like ‘Oh, gosh. Here we go again.’”

On the group’s Facebook page – Let Michigan High School Football (all sports/activities) Play!! – they are making a call to athletes, fans, coaches and parents from all sports to attend Friday’s rally. The group has a number of speakers planned, including athletes, coaches, medical personnel, athletic directors and superintendents, to help state their case.

“We want the kids to see we care and that somebody is fighting for them,” said McElvany, a Monroe business owner and mother of a Milan football player. “We can’t just sit back and give in. People are tired. People are worn out. But I’m not going to quit.”

When the MHSAA announced on Aug. 14 that the football season would be moved from fall to spring, the Let Them Play group quickly formed. The group spirited a march on the Capitol on Aug. 28, attracting about 500 attendees. On Sept. 4, the MHSAA was given the go-ahead to play, and the season eventually began for all fall sports.

But with the rise in coronavirus numbers throughout the state, another shutdown was issued – with football, volleyball and swimming yet to conclude their seasons. The Let Them Play group, with a 10-person board and nearly 19,000 members on Facebook, returned to action.

“Not that we think we have the power and they’re going to listen to us, but at this point, we have to do something,” McElvany said. “It’s not about football. It’s not about sports. It’s about the mental health of our children that is quickly declining.

“I’ve received so many messages from parents saying how their kids are literally lost. People say they’re walking into their teenagers’ bedrooms and they’re crying or sleeping all day because there’s no reason to get up. Kids are failing in school and they feel like there’s nothing left for them. The things I hear have me in tears.”

McElvany said sports – as well as in-school learning – are needed to keep kids in a positive state of mind during the pandemic.

“The roller coaster they have them on is hard, too,” she said. “They did everything right. They followed all the rules. What else can they do? It’s starting to feel like an intentional attack on the youth.”

McElvany said she has kept in contact with MHSAA director Mark Uyl, who recently voiced his frustrations that high school sports were included with the shutdown measures. The Let Them Play group is using data provided by the MHSAA which suggests that mask-wearing, health screening and other measures were a success in keeping athletes safe this fall.

“We proved we should be on the yes list,” McElvany said. “Mark Uyl said 95 percent of the teams were able to play this fall. There have been zero hospitalizations and zero deaths traced back to athletics. So why are we on the bad list? We should be on the go-for-it list.

“It’s frustrating when they say they’re following the science. Ohio and Indiana finished their seasons without wearing masks. We played sports in masks and that wasn’t good enough for Gov. Whitmer and the health department.”

The Let Them Play group is asking supporters to show up in Lansing from 3-5 p.m. Friday, dressed in school colors and wearing masks. McElvany asked for no political signs or anything that may distract people from the group’s message.

She said she’s expecting a similar turnout to last time, with teams coming from as far as the Upper Peninsula to show their support for the continuation of high school sports.

“Some people say ‘It’s just sports. You’ll be fine,’” she said. “It’s not fine. Our kids are hurting. We need to get them back with their teams and let them play.”

Tiffany Hagler-Geard | Bloomberg | Getty ImagesThe stock market is known for being unpredictable and volatile, and any sense of normalcy was blown up...
Read more
Cryptocurrencies

As Bitcoin outperforms in 2020, here's a beginner's guide to investing in cryptocurrency&  New Delhi: Bitcoin, by far the...
Read more

The EU is allowing some 92 exemptions from the export control regime, including: vaccine donations to Covax, the global scheme to help poorer countries;...
Read more
USA

As health care workers and nursing home residents await the first scarce syringes of COVID-19 vaccine, few realize that when they will get a dose...
Read more
Economy

He added that the measures put in place to contain the spread of the coronavirus pandemic “are measures that we sought to assist those...
Read more

The shortest month of the year was not short on stock market surprises. February started with the S&P 500 notching a 5.4% gain in...
Read more
USA

Here’s what you need to know:Boeing’s 737 Max returned to the skies on Wednesday for its first passenger flight since being grounded nearly two...
Read more

Stock-market sentiment hitting ‘ludicrous’ territory, but when will bulls ‘pay the piper’? – MarketWatch

The stock market’s run to all-time highs has the look of a classic grind higher, but bullish sentiment levels — a contrarian indicator —...
Read more
USA

Why is Bowman a fit for this job?Mark Lazerus, Blackhawks beat writer: It was only a matter of time before Bowman was tapped to...
Read more