The European Super League. A topic that keeps raising its head and always proves controversial.

The theory is that the continent’s top sides will eventually break away from their domestic leagues to form their own competition.

But what do the fans think?

A BBC Sport poll suggests that depends on their age, what club they support and where they live. 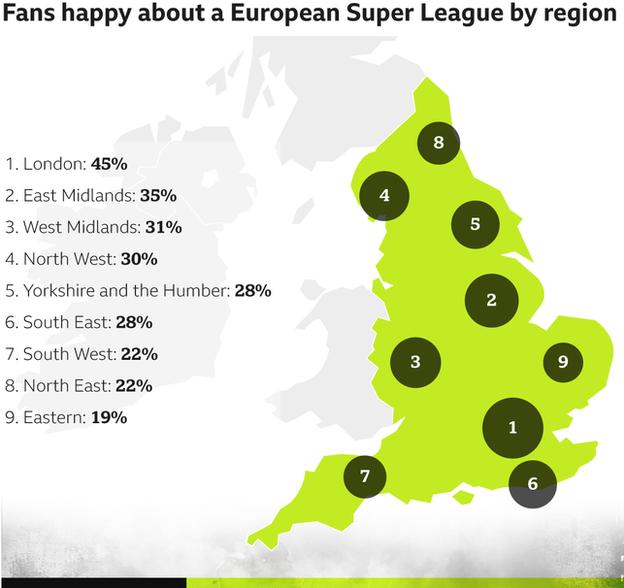 The Premier League’s so-called ‘big six’ are Liverpool, Manchester United, Manchester City, Arsenal, Chelsea and Tottenham – an even split of London and north-west based clubs.

All are teams who play regularly in both the Champions League and the Europa League.

The poll shows fans from London (45%) are significantly happier at the idea of a European Super League than almost any other part of the country.

Just a quarter of London-based fans (26%) are unhappy at the idea. Almost half (46%) of fans from London think a breakaway league would be a good idea for football overall, compared with 36% in the north west and 29% in the north east. 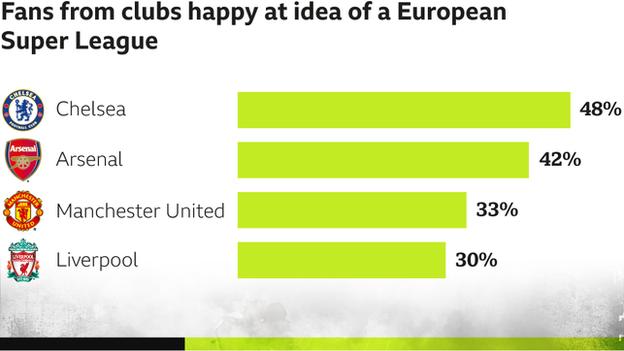 Would fans watch it?

Almost half of all fans (47%) said they would be more excited to watch Premier League football than a European Super League.

For fans aged 18-34,36% were more excited to watch the Premier League, while 23% favoured the idea of watching a breakaway league and 31% were equally excited.

Where are we up to with the European Super League?

A European Super League is one of those vague concepts that sounds attractive in theory but no-one really goes into the detail of how it might actually happen in practice.

Essentially, it’s the most famous teams in the world, all competing against each other on a weekly basis.

Working out how many teams – and from which countries – is just one of the practical problems. Yet the threat is realistic enough for Fifa, Uefa and the national associations to take it seriously.

Former Football Association chairman Greg Clarke used it to trigger the talks that culminated in ‘Project Big Picture’. Former Barcelona president Josep Maria Bartomeu said he had signed his club up to the idea as he was delivering his resignation speech recently.

Uefa is already committed to reform of its club competitions from 2024. It is no surprise a European Super League is being talked up again because the big clubs want more – financially – than they have now.

They don’t want to be playing the likes of Lokomotiv Moscow, Midtjylland and Ferencvaros – who between them have not won a game in this season’s Champions League – once, let alone twice in the group stage.

The threat of a European Super League is a handy tool for big clubs to use in their negotiations with Uefa for a better deal. It is why no-one will come out and say it will not happen. But that doesn’t mean to say it will.

Savanta ComRes interviewed 5,476 UK adults aged 18+ online between 20 and 24 November 2020, 2,100 of whom qualified as football fans for the purpose of our survey according to Savanta-gathered data on football fans and their demographic profile. Data were weighted to be demographically representative of UK adults 18+ by age, gender, region and social grade. Savanta ComRes is a member of the British Polling Council and abides by its rules. The full poll is published hereexternal-link

British Economy, Post-Brexit and Pummeled by Covid, Is Worst in G-7 – The Wall Street Journal

The U.K.’s economy shrank more last year than any of the G-7, in what the Bank of England says will be the country’s biggest...
Read more
Stock

The S&P 500 closed at another record Thursday, propelled by a resurgence in big technology stocks. Stocks have started the second quarter on strong...
Read more
European Premier League

Tottenham Hotspur appear to be in the market for reinforcements. The club are enjoying a fine season and are currently fifth in the Premier...
Read more

Vaccines are on the horizon in the U.S., and distribution could potentially begin by mid-December.Two companies – Pfizer and Moderna – have already applied...
Read more
Cryptocurrencies

Verady, which makes the Ledgible cryptocurrency tax and accounting platform, has releases Ledgible Tax Pro, which has extra features beyond the standard platform. Legible...
Read more

Reports: European qualification might be the only thing that can save Mourinho’s job – Cartilage Free Captain

Tottenham Hotspur was absolutely radio silent on Friday, which shouldn’t be surprising to anyone. Of course, the club was traveling back from Croatia after...
Read more
World News

Motorsport.tv Live will deliver breaking news as it happens from around the globe on the Network's OTT platform Motorsport.tv. The service will be hosted from...
Read more

Like pretty much everything in 2020, Thanksgiving looks a lot different due to COVID-19.Many are spending their first Thanksgiving alone or without loved ones. Families...
Read more
Economy

Pressing a button to restart national economy after crisis. getty Between the U.S. Bureau of...
Read more
Stock