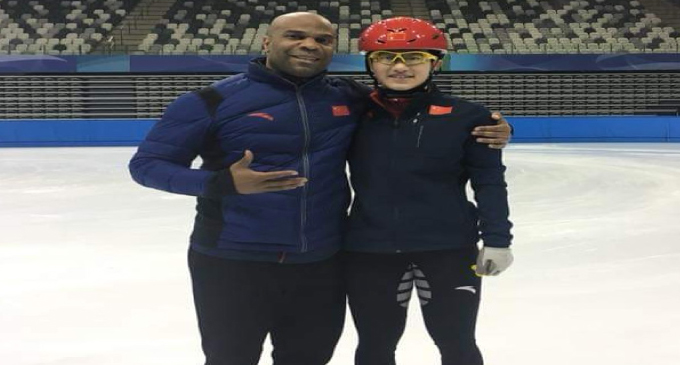 When you think of speed, the first sport that comes to mind is track and field, but what many people fail to realize is that speed relates to almost every sport imaginable. As one of the premiere experts on the subject, Derrick Speas has opened a new training facility at 955 Northwest Blvd, Suite 200, to share his knowledge on speed and athletics with local athletes.

Speas is a Winston-Salem native and has won wherever he has coached. As a high school track and field coach, he led several athletes to state championship titles. He has also trained professional athletes and most recently, he trained the Chinese speed skating Olympic team.

According to Speas, one of the purposes of the facility is to expose local athletes to other sports outside of football and basketball, because he knows there are other sports where athletes can become successful.

Speas thinks many American athletes think about sports in too narrow of a spectrum. On the amateur level, Speas feels that most often the coaches in team sports benefit more from the blood, sweat and tears of the athletes, then the actual athletes themselves.

“As parents and community and local high school coaches, you have to take two steps back and look at the total picture of what team sports brings,” he says. “On the other hand, if you do independent sports – example, Serena and Tiger – they’ve won money at a young age.

“When you play these team sports, it’s an illusion. If we know that those NFL contracts are not guaranteed, why are we still sending a lot of our kids that way? There are some success stories like in every sport, but the opportunities are not guaranteed.”

Speas says that football and basketball coaches on the professional level are looking for certain criteria in their athletes based upon the position they play. He feels many athletes who play these sports don’t meet those specifications and their skillset might be better suited for another sport.

“I am not trying to crush anybody’s dreams, I am just saying from my experience from around the world, I still see an opportunity that we are not taking advantage of, like X-Games or Olympic sports for example,” he continued.  “It’s so many other things that we can do for success.”

Speas says his facility will bring to light these opportunities for kids to explore. He says many people have a flawed sense of what success looks like when it comes to sports. At his center, he will share his three levels of success which are sports science or psychological aspect of the athlete, sports training, and sports consulting.

“My training center will not only provide top-notch training, not just locally, but around the world, and I am going to take these kids down to Dallas, Texas, where I have partnered with Anthony Levine and TSD (Total Sports Diagnostics) and we are going to take these kids down there to give them a better opportunity, on a bigger stage, to train and see talent,” said Speas.

“For so long we have been playing checkers not chess by focusing on two sports. Think about in America how many kids play basketball and football from Pop Warner all the way up. They are the easiest sports to participate in as a youth, but two of the hardest to play at the highest level. If you take some time to think, that same kid who is an average track guy is used to wearing spikes; why can’t he go and push a bobsled, they wear spikes and they sprint?”

Speas says he has noticed a lot of people teaching skills’ training around the area, but are not focusing on speed. He feels speed in the “number one” motor skill that sets athletes apart from one another.

“Speed has been my whole life, and not only did I have success with track and field locally, that same model transferred to ice. I have been influenced by the world and world speed, so bringing speed to the table, I can enhance skillset after they have that number one motor skill.”

The idea for the facility came to Speas as he was coaching in China. He says while there, he had plans to bring what he has learned back to his hometown of Winston-Salem.

“I knew when I came home what game I wanted to play,” he said about his plans. “I knew what I experienced and the hunger I had. The longer I wait, the longer a kid may miss out on an opportunity that I may possess.”

From his world travels, Speas says he has learned that no coaching philosophy is wrong, but you have to base your training off results, and he has delivered those results over the years.

“I am here for the kids and trying to introduce my triangle of success to the city,” he continued.

Speas says he is very passionate about what he does, so he is looking for kids with a similar mindset.

“We have to have criteria and standards and serious parents that can take two steps backwards sometimes,” he said.  “I know I can’t influence everyone, but the ones that come through the doors, I’m going to try my best to influence them and use my resources to help them be successful.”

Speas’ center is not limited to just athletes. He is looking to develop local coaches as well, because he will be traveling frequently and needs knowledgeable coaches to train at the center. He also wants to give other local coaches the information he has to take back to their respective locations.

‘People are so ready.’ Is Oklahoma City’s economy about to see another ‘Roaring 20s?’ – Oklahoman.com

In the old town of Britton, a long blighted stretch of storefronts is coming to life. Where there were once seedy bars, passersby now see...
Read more
Cryptocurrencies

WTF Is an NFT? The Latest Cryptocurrency Craze Explained – PCMag

Another day, another cryptocurrency. Over the past few weeks, stories about NFTs (non-fungible tokens) have crept into the news cycle. Grimes is making $6...
Read more
Sports

Is New York Knicks coach Tom Thibodeau too tough for the toughest job in sports? – ESPN

In which parts of the world are you most likely to be involved in an accident? – Bedfordview & Edenvale News

To answer this question, Zutobi has analysed countries around the world on factors such as the number of deaths on the roads, maximum speed...
Read more
Business

A hiring sign is seen in front of a Qdoba restaurant, as many restaurant businesses face staffing shortages in Louisville, Kentucky, U.S., June 7,...
Read more
Stock

The USA Men's 7s team finished the Madrid 7s with a disappointing 3rd place, seeing their hopes for a better finish disappear thanks to...
Read more
USA

The first damage assessment of a sprawling cyberattack linked to Russia has been chilling enough.With intrusions reported across a huge swath of the government...
Read more
Cryptocurrencies

The Treasury Department on Thursday announced that it is taking steps to crack down on cryptocurrency markets and transactions, and said it will require...
Read more

Going undercover in the schools that chain boys – BBC News

The abuse began in the evening sessions. If we were sleepy and closed our eyes, the sheikh would whip us. That would certainly wake...
Read more
Business

Becoming Teammates in Life and Business – The New York Times

Because marriage is an ever-evolving experience, we constantly shift, change and, in some cases, start over. In It’s No Secret, couples share thoughts about...
Read more
Cryptocurrencies