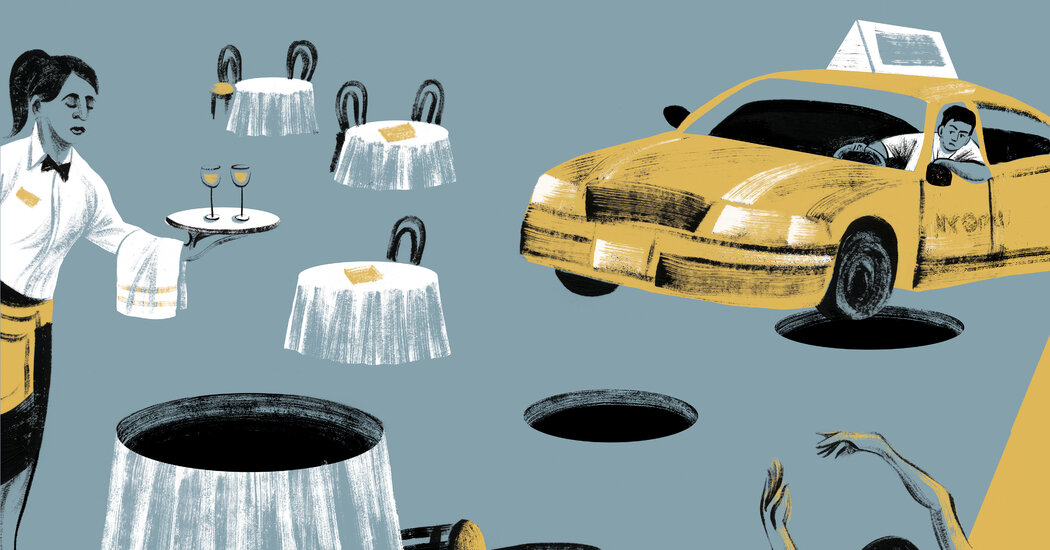 “2020 seems to be turning around,” Mr. Sooper said. “I’m feeling pretty confident. If they don’t take me for this one, there are others I can apply to.” Still, he couldn’t immediately find a union job as a welder, so for the time being he took a job doing body work for a company that makes eco-friendly bus frames.

Derrius Gosha, 30, had been in Los Angeles for only a few months when the pandemic ended his job on the sales floor of Bath and Body Works in February. He is now back at home in Birmingham, Ala., living with his mother and grandmother. John Restrepo, 25, furloughed in March from his job as a server at Tony’s Town Square Restaurant in Disney’s Magic Kingdom in Orlando, Fla., is sticking it out in an apartment with his two roommates. Barbara Xocoyotl, 57, furloughed in March from her cleaning job at the Omni hotel in New Haven, Conn., had to give up her apartment and is living with a daughter in New York.

All are waiting for the economy to restore the jobs they have known. “If there are no retail jobs, I could work at a warehouse, and I’m OK on a conveyor belt,” Mr. Gosha said. “The only thing I wouldn’t want to do is put on a hard hat and go dig a ditch.” After weeks of hunting, he landed a seasonal position in the lawn and garden section at Lowe’s.

Often, the old jobs just don’t return at all. As he searches for an opening at CVS, or Walgreens, or another restaurant in town, Mr. Restrepo pins his hope on a deal that his UNITE HERE union local struck with Disney to offer the workers it let go a first crack at jobs once business returns, and retrain them for other Disney jobs if their old positions are terminated. “Thinking optimistically, by the summer of 2022, the majority of us will be able to go back,” he said.

Ms. Xocoyotl has a doomsday plan in case the old jobs don’t return: to return to her hometown in central Mexico to be close to her mother. “I’ve been looking for a job, but nobody calls me back, nobody tells me anything,” she said. At her age, she added, “people don’t even ask what one is good for anymore.”

Training has always been a challenge for policymakers, and the pandemic complicates matching new skills with jobs. Austin Urick, 31, went back to school after he lost his job last year selling equipment for the oil and gas industry. He enrolled at San Jacinto College near Houston to learn instrumentation and electrical systems. He expects to graduate this month, certified to calibrate and replace gauges and pumps used by oil and gas companies.

The industry, however, has suffered during the pandemic. While he has some good leads, his job hunt hasn’t yielded any offers. “It is worrisome,” Mr. Urick said. “But my Plan B is not just oil and gas.” The instrumentation degree can be taken in different directions. “I can work in an elevator company or in a hospital, anywhere that has gauges,” he added. “I can go down the street to Budweiser.”

Man Utd being eliminated at Champions League group stage ‘would not be a failure’, says Berbatov – Goal (English International)

PayPal plans a much wider embrace of cryptocurrency, including Venmo use – Fortune

5 things to know before the stock market opens Friday – CNBC

Here are the most important news, trends and analysis that investors need to start their trading day:1. Wall Street set to continue its record...
Read more

Stocks rose on Monday after AstraZeneca and the University of Oxford said their coronavirus vaccine was up to 90% effective, becoming the third inoculation...
Read more
Economy

By Reuters Staff2 Min ReadPARIS (Reuters) - The French economy will expand by 5% in 2021, Economy Minister Bruno Le Maire said in a...
Read more

Landing her perfect job Putting her dream of working in sports on hold, Gibson landed a job that focused on nutrition...
Read more
USA

New York State officials are releasing some more information about the process for small businesses to apply for a share of an $800-million program...
Read more