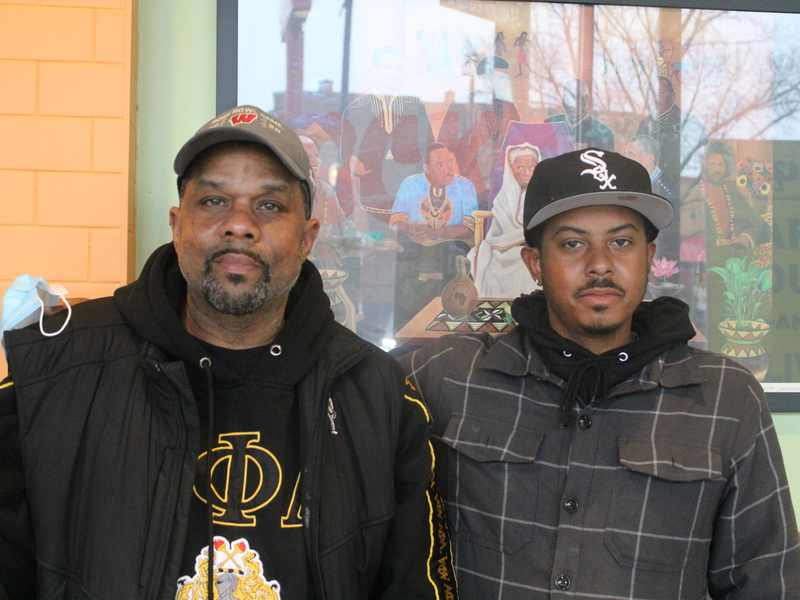 For the last 17 years Yasin Khan has operated Best Buy Clothing with no problems, he says, but since the pandemic, revenues are down 50 percent at the Bronzeville store.

“Before the pandemic I would average 75 to 100 customers a week,” said Khan, owner of the clothing store at 210 E. 47th St. “But now it’s down to about 15 customers per week,” he said. “At this rate I don’t know how long I will be able to stay open, especially once the moratorium on evictions run out.”

Khan’s monthly rent is $5,000. He was unable to pay for November and said he won’t be able to pay for December either. However, he has been able to keep on his three employees.

“I have been in contact with my landlord about my situation but at the end of the day I know eventually if I cannot get caught up on my rent I will have to move and that scares me,” Khan says. “The thought of leaving a community that has always supported me is heartbreaking. I have watched little kids grow up in this community and shop here over the years. And now those same kids are adults with kids of their own and they continue to shop here.”

If small businesses are going to survive the pandemic, new federal programs must be created, said Turqueya Wilson, president of the Bronzeville Chamber of Commerce.

“If small businesses start to close due to non-payment of rent or lack of revenue it will create blight in the community as properties sit vacant,” she said. “(Before the pandemic) the business climate in Bronzeville was at a steadily climbing pace.”

“Overall, COVID has dramatically affected the economy. Small businesses in Bronzeville and all over are more challenged now because they don’t have same kind of resources as bigger businesses.”

One of President-elect Joe Biden’s first order of business should be getting a stimulus bill passed, said Dowell.

“A second stimulus bill is an absolute necessity. Many small businesses in Bronzeville now offer other services as a way to stay in business, which is a positive thing,” said Dowell.

“One of my businesses, a barbershop, is getting ready to pivot into hair restoration. Another business, a women’s clothing store, is selling T-shirts now. And a banquet hall owner is turning his space into incubator space for entrepreneurs.”

Other Bronzeville businesses like Dock’s Fish and Chicago’s Home of Chicken & Waffle are also struggling to keep their doors open.

“When the pandemic first hit it was pretty bad because we lost half our sales. It was tough for us, but we are keeping our fingers crossed that things start to improve soon,” said Keith Pryor, co-owner of Dock’s Fish, 321 E. 35th St. “We’ve laid off employees and reduced operating hours to compensate for loss revenue, which is a 50 percent drop.”

Pryor, a former McDonald’s franchise owner, said that as an independent restaurant owner he does not have traditional corporate support like other fast-food restaurants.

“When you are independent you have to stand on your own two feet,” Pryor said. “Dock’s does not have a drive-thru and that is hurting us. It’s carryout only here.”

Chicago’s Home of Chicken & Waffle at 3947 S. King Drive is one of Bronzeville’s popular sit-down restaurants, but since March has laid off 35 employees.

“We had 55 employees before the pandemic hit and today, we have 15,” said Darnell Johnson, who has owned the restaurant for more than 10 years. “Revenues have dropped as much as 70 percent but now it’s down only 50 percent. It’s still not good but it’s gotten better.”

For now, the restaurant is surviving on carryout orders, but Johnson said it does not generate “nearly as much money as dining in.”

Dock’s has been able to keep up with the rent, according to Pryor, and Johnson owns his restaurant space.

None of these business owners has applied for the state’s Business Interruption Grant, but say they plan to soon.

The state created the program to provide economic relief for small businesses hit hardest by COVID-19. Small businesses in the Bronzeville area so far have received more than $2 million from BIG, according to Lauren Huffman, a spokeswoman for the Illinois Department of Commerce & Economic Opportunity.

PayPal says all users in US can now buy, hold and sell cryptocurrencies – TechCrunch

PayPal announced today it’s dropping the waitlist to buy, hold and sell cryptocurrency in the U.S. With the move, all customers in the...
Read more
Economy

Japan’s economy shrank in the first three months of 2021, continuing a swing between growth and contraction as its plodding vaccination campaign threatened to...
Read more

As Bitcoin soared to above $28,000 over the weekend, talk resumed about the promising and dramatic future of cryptocurrency. The chief global strategist of...
Read more
Sports

Your sports calendar for April brought to you by Betway – IOL

The world of sport is coming alive in April with major football, cricket and rugby tournaments taking place. Sport brings people from around the...
Read more
Stock

At the end of the day, investors want to see returns. To accomplish this goal, seasoned Wall Street observers often turn to one strategy...
Read more
Business

Three of Europe’s largest economies slowed by less than expected in the final quarter of last year, despite fresh measures to contain the coronavirus...
Read more
Business

Start a small business by capitalizing on these 4 trends – MarketWatch

This article is reprinted by permission from NextAvenue.org. It’s been nearly a year since the coronavirus pandemic upended our lives. A year when we embraced...
Read more
World News

"Very soon we'll resume our normal lives," said the president, who has been under heavy criticism at home and abroad. Shortly before his four-minute...
Read more